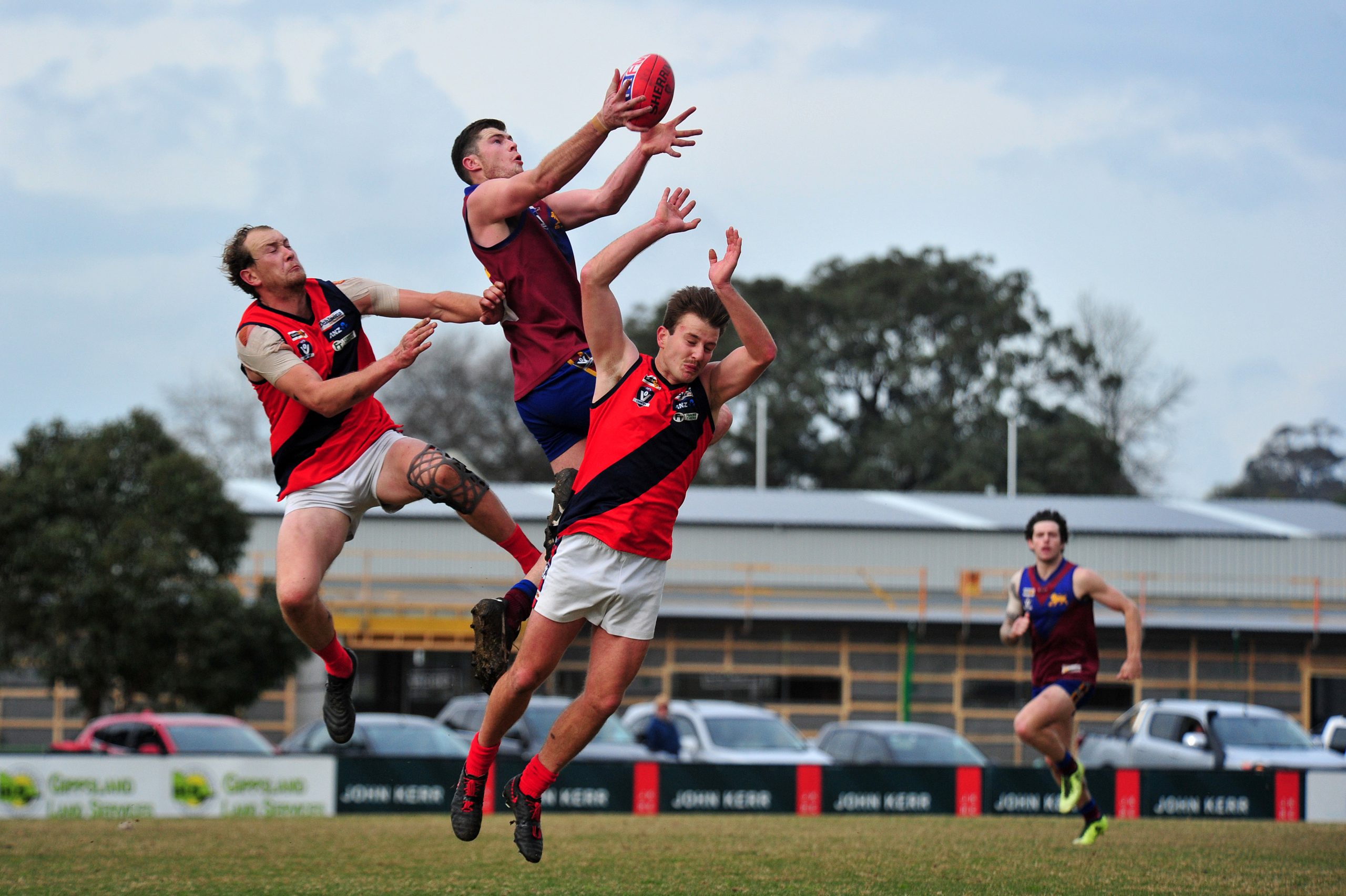 THE Lions kept their winning run home to finals intact, making it seven on the trot with a comfortable win over Bairnsdale on Saturday, 15.16 (106) to 9.9 (63).

The home side established a slender three-point lead at the first break with two goals from five scoring shots.

The margin blew out to 30 points at half-time as the Lions added another six goals and three behinds to the Redlegs’ two straight goals.

Bairnsdale pegged back the lead to 28 points at three-quarter-time but another four goals and four behinds to the Lions in the run home helped them run out 43-point winners.

Tristan Gum enjoyed his best game for the year and finished with four goals for Moe in the win.

A trio of others – James Blaser, Hayden Prestidge and Dylan Farrell – all made major contributions and kicked two goals each.

The big win comes on the back of consecutive losses to Maffra and Traralgon, respectively, and keeps the Magpies in reach of ladder leaders Maffra with four rounds of the home and away season remaining.

The Magpies made a statement from the first bounce, kicking five quick-fire goals to Drouin’s one to lead by 25 points at quarter-time.

The Hawks were held scoreless in the second while the visitors added three to their tally to stretch the margin to 48 points at the main break.

With a 68-point lead heading into the last term, Sale refused to relent and kicked seven goals in their best quarter for the day to win by 97 points.

Goal-kicking machine Brad Dessent added four majors to his season tally and now sits 24 clear of Maffra’s Daniel Bedggood on the top of the league goal kicking board.

Three others including John Gooch, Mitch Dowse and Jack Allman all bagged three goals each, Jayden Allison kicked two and singles went to four others.

Among the best for Sale in the win were Jack Lipman, Dowse, Gooch and Jackson Glenane.

Defending premiers Leongatha overcame a third-quarter slump to fend off Morwell for their fourth consecutive win, 12.18 (90) to 9.4 (58).

The Parrots burst out of the blocks in the opening term with four goals to Morwell’s one to lead by 19 points at the first change.

The gap was widened by three points at half-time but a Tigers resurgence in the third term helped them hold Leongatha to just three behinds and flip the deficit to carry a one-point lead into the last break.

The home side had all the play in the final term, kicking five goals and a huge 10 behinds to run out 32-point victors.

Nick Nagel led the way for the Parrots in front of goal and finished with four majors while Cade Maskell kicked three.

Cameron Olden also got in on the scoring action and nabbed two goals while singles went to Ben Willis, Cameron Stone and Brok Davidson.

The Eagles kicked five first-quarter goals to lead by 26 points at the first break but Warragul won the second term with four goals to two to close the gap to 13 points at half-time.

The home side was restricted to just three goals for the remainder of the game while Maffra went on to add eight majors to twin by 49 points.

Alex Carr kicked four goals for the Eagles in the win while four others – Lachlan Channing, Jack Johsntone, Andrew Petrou and Tom Jolly – kicked two each.

Wonthaggi scrapped their way off the bottom of the Gippsland league senior ladder with a victory over Traralgon on Saturday, 10.11 (71) to 5.14 (44).

The Power led by one point at the first break but the Maroons had the Lion’s share of play, squandering their shots on goal with just one major from seven opportunities.

The visitors were made to pay in the second and Wonthaggi increased their lead to 16 points at half-time.

The kicking woes continued in the third for Traralgon with one goal and another five behinds keeping them 14 points off the pace.

Wonthaggi added another three goals to the Maroons’ one goal and two behinds in the last quarter to run out 27-point winners.

Nathan Jones kicked three goals for the Power in the win and Jordan Staley kicked two.

For Traralgon, Max Luckie was the only multiple goal scorer with two.