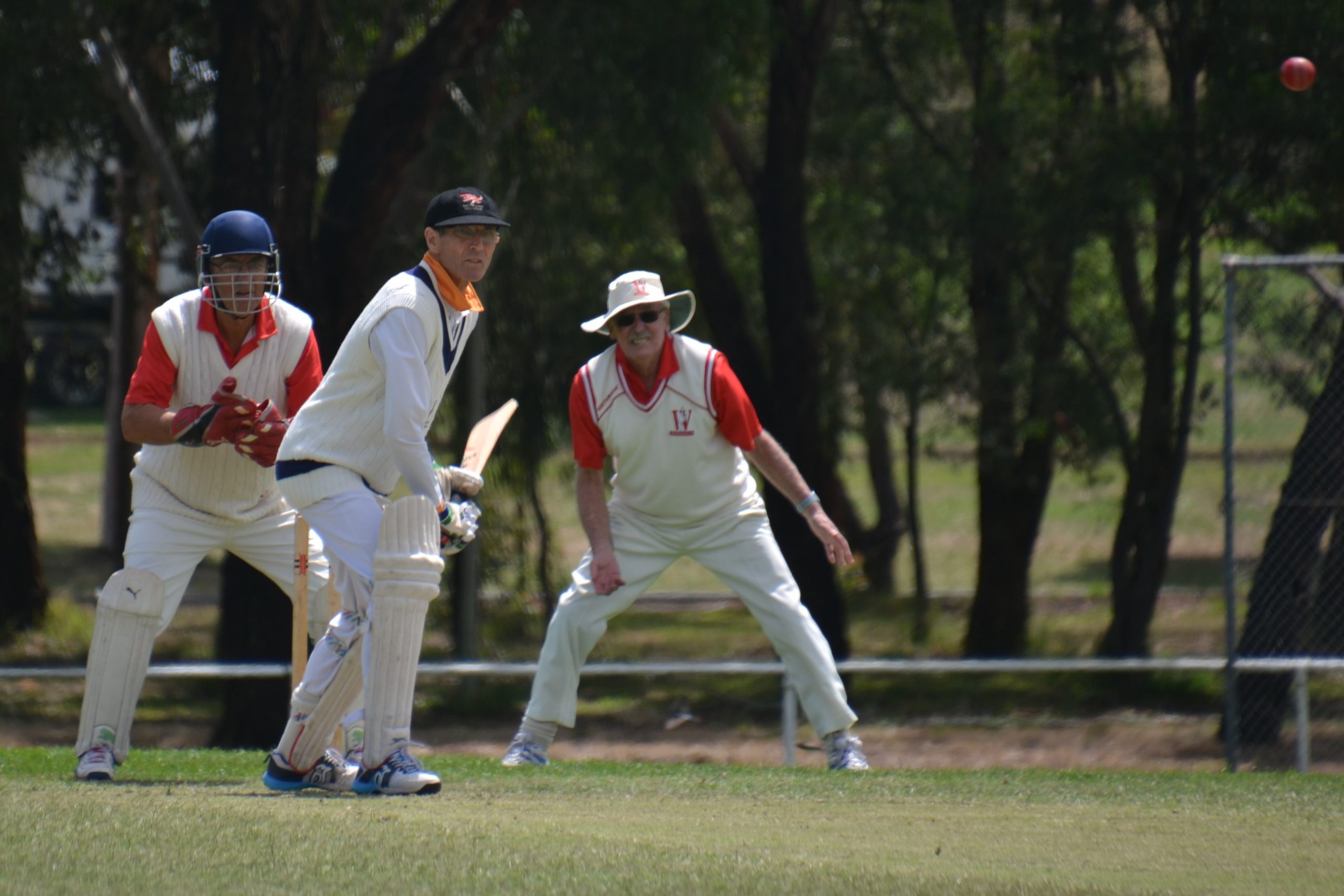 It was a cool and breezy morning as the Gippsland Goannas Over-60 cricket team arrived at Andrews Park in Churchill for their game against the Warrandyte Veterans.

The covers were quite wet, after a shower or two, but with a few minutes effort, the water was cleared, the covers were removed and the wicket revealed.

The visiting skipper Noel Sharpe won the toss and sent the Goannas on a wicket on which was difficult to play cross batted shots safely.

They then managed to take the score to 61 in the 13th over, when Smith was bowled for 26.

Col Carmody came in and was unfortunately run out for two in the 17th over.

Bailey retired for a well made 40 soon after the drinks break and Murray Moore and Neil Meredith took the score to 99 in the 26th over when Meredith was out for 11.

Kevin Lanigan joined Moore, his first two scoring shots were a four and a six, then Moore was out for 18 when the score was 123 in the 31st over.

Gordon Hollonds hit a nice drive for four, but was bowled next ball and Ian Gibson joined Lanigan.

They put on a very good partnership of 45 runs in seven overs when Lanigan retired for 40 from just 38 balls.

This was an excellent innings on a less than perfect batting surface.

Kelvin Bond, in his first game for many weeks was run out without facing a ball, and Barrie Nunn and Gibson took the score to 169 at the end of the 40 overs.

The cloud cover had scattered as the Goannas took the field for the afternoon session, and the cool westerly breeze was blowing consistently across the ground.

Ian Southall opened the bowling from the southern end and soon had Warrandyte on the back foot, hitting the stumps in his third over.

The score was 1/8 after five overs.

Lanigan had bowled from the northern end, and he too hit the stumps soon after.

Rob Bachetti replaced Southall whose figures were 1/8 from five overs.

Lanigan continued to bowl tidily, inducing a false shot with his penultimate ball, and taking a nice return catch.

His figures were 2/7 from eight overs which included maidens.

Bacchetti found the edge for wicket-keeper Gibson to snare a catch in the next over, and Warrandyte were reeling at 4/27 after 17 overs.

Kel Bond came on at the northern end and bowled as if he had not missed a game, rather than having his first bowl since late November.

Bond was rewarded with a wicket in the 28th over, and his spell of eight overs, 1/16 was a great return to the crease.

The score was 5/61 after 28 overs and Gordon Cowling replaced Nunn from the southern end.

The Warrandyte batsmen continued to find it difficult to score, with Meredith replacing Bond in the 34th over.

Cowling (six overs for 11 runs) and Meredith (four overs for seven runs) completed the bowling as Warrandyte crawled to 5/82 at the completion of their innings.

The Goannas will travel to Alexandra to play the Research Over-60 team on Sunday.

The Goannas Over-50 team traveled to Coburg for their final game to take on the second placed team in the First Grade Saxon Shield Competition.

They batted first to reach 7/193 from their 36 overs with a number of solid contributors.

Greame Rankin top-scored with 43, one more than Brad McDonald and three more than Rod Jones with all three batsmen retiring not out.

Geoff Wells also crafted 35 runs at the top of the order.

In reply, Coburg proved too strong chasingdown the total in the 35th overs to finishing with 3/197.

The Coburg club put on food and drinks for the thirsty Goannas with a few short speeches and players awards given out topping off a great day’s cricket.

This was the first season for the Goannas Over-50 team, and to be put into the highest division (of five divisions) and play very competitive cricket, winning one game, and losing several very narrowly, was a magnificent effort.