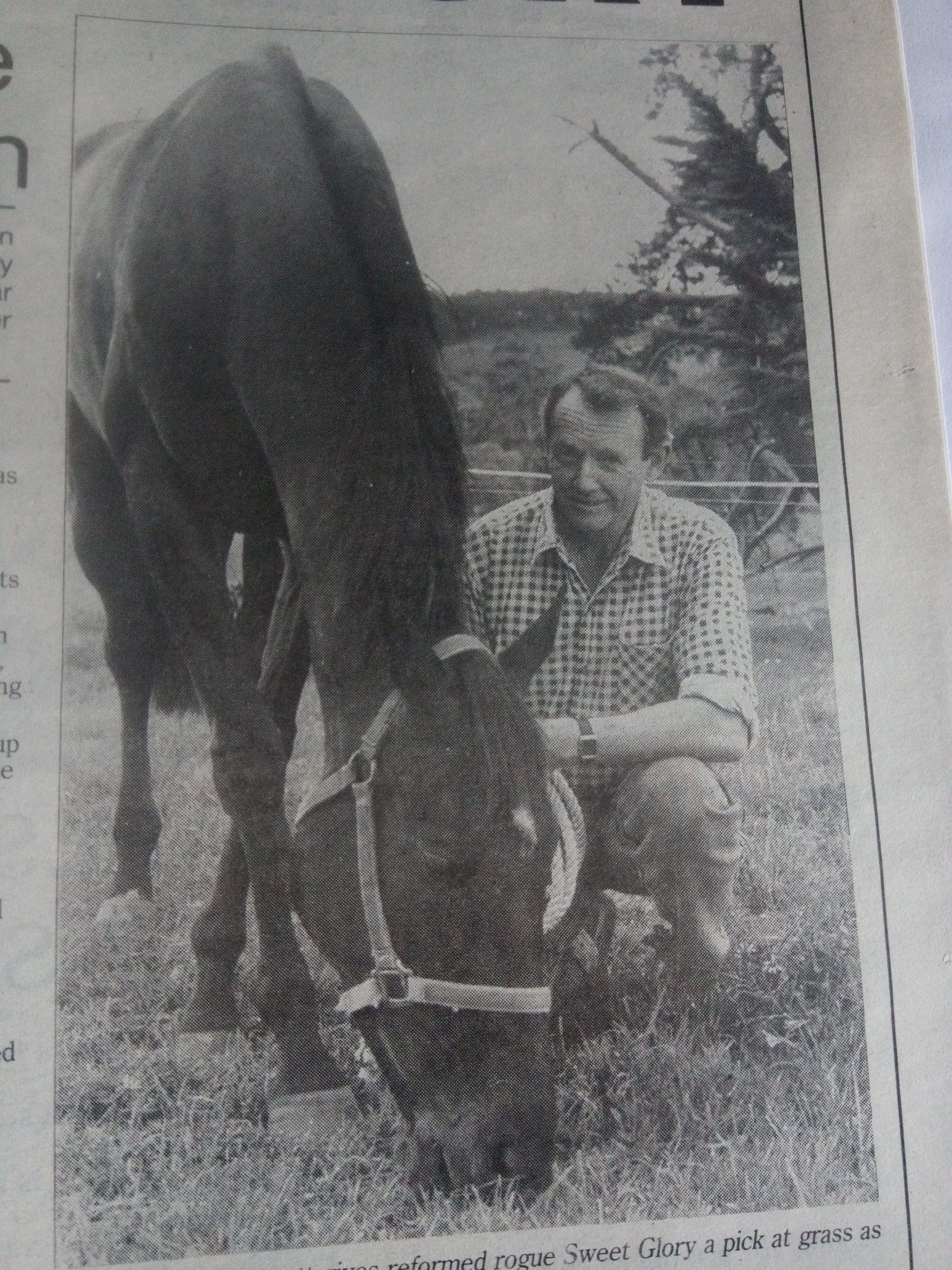 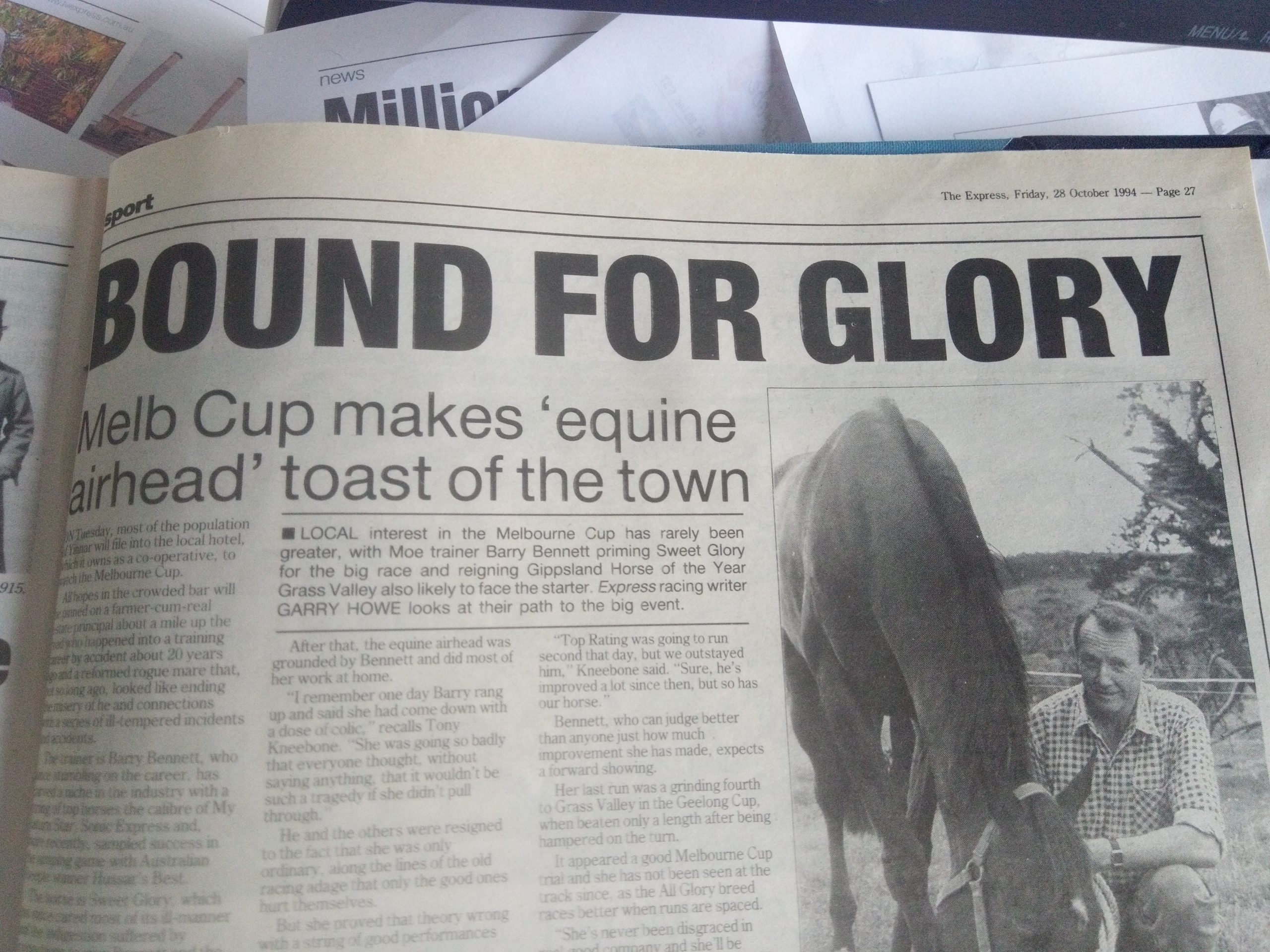 DESPITE the rise in international interest during recent decades, the Melbourne Cup is still the race that stops the nation.

First run in 1861, the Melbourne Cup has been won by some of the greats of the turf.

Archer, Carbine, Phar Lap, Peter Pan, Rising Fast, Rain Lover and of course the great Makybe Diva are etched in history for their deeds at Flemington on the first Tuesday in November.

But arguably the true beauty of the race is that it provides anyone the chance to dream of victory.

Take Rogan Josh, the 1999 Cup winner, who was owned by Darwin schoolteacher Wendy Green and trained by Bart Cummings.

You know, the man that trained 12 Melbourne Cup winners.

Mrs Green’s road trip back to the Top End saw her call into a number of towns and the Cup trophy was called on to christen a baby under a tree in Tennant Creek.

Gippsland can lay claim to producing a Melbourne Cup winner in Patrobas.

Patrobas started his career being beaten in a two-horse race at Rosedale, but emerged into a champion after being sent to Melbourne trainer Charlie Wheeler by owner Edith Widdis.

The brown colt won the Caulfield Guineas and the Victorian Derby before tackling the great race.

Ridden by jockey Bobby Lewis, Patrobas, carrying saddlecloth 19, won the Melbourne Cup in a time of 3:28.25.

Mrs Widdis became the first female to own a Melbourne Cup winner, but as women were not permitted into the mounting yard or members area of the Victoria Racing Club, she received the prize away from the track.

Fast forward 79 years and the Latrobe Valley was dreaming of a Melbourne Cup success.

Sweet Glory announced her arrival as a Cup contender in 1994.

The daughter of New Zealand-bred stallion All Glory started the year winning a 1600m Class 2 Handicap at Sale with jockey Shane Tronerud in the saddle.

Sweet Glory landed a city success at Sandown on February 1 and followed that up by saluting at Flemington in an Open Mares Handicap (2000m) on February 19.

Both times she was ridden by Greg Childs, who would later go on to ride the champion New Zealand mare Sunline.

After three unplaced runs, Sweet Glory turned up as a lightweight hope in the 1994 Adelaide Cup.

Starting 60-1 in the 20-strong field, Sweet Glory ran out of her skin under jockey Peter Shepherd to finish second, beaten half a length by Our Pompeii.

The performance qualified her for that year’s Cup.

Sweet Glory’s preparation for the great race saw her kick-off in the Sale Quality before building up to run second at Moonee Valley in Open company and then an eye-catching fourth in the Geelong Cup.

The Cup emerged as the right formline for a number of internationals in later years such as Americain and Dunaden, but that year was won by Grass Valley.

On the eve of the big race, The Express racing writer Garry Howe shared a story on a horse described as ‘an equine airhead’.

On Tuesday, most of the population of Yinnar will file into the local hotel, which it owns as a co-operative, to watch the Melbourne Cup.

All hopes in the crowded bar will be pinned on a farmer-cum-real estate principal about a mile up the road who happened into a training career by accident about 20 years ago and a reformed rogue mare that, not so long ago, looked like ending the misery of he and connections with a series of ill-tempered incidents and accidents.

The trainer is Barry Bennett, who since stumbling on the career, has carved a niche in the industry with a string of top horses the calibre of My Saturn Star, Sonic Express and, more recently, sampled success with Australian Steeple winner Hussar’s Best.

The horse is Sweet Glory, which has since cured most of its ill-manner and the indigestion suffered by connections to give Bennett and the Yinnar townsfolk their first runner in Australia’s most famous horse race.

He has picked three horses from over the Tasman that have all won for his son Tony, editor of the Winning Post racing newspaper, Rob Vella and Bennett’s wife Judy.

Alf was sent to a ready to run sale at Cambridge in search of something that might stay a bit and set his sights on a two-year-old filly.

Alf came up with the extra $200 and she was shipped over to the Bennett stable.

“I liked her on breeding and conformation,” he recalls.

“She is still a nice looker.”

But the temperament never really matched those other attributes and it wasn’t long before she earned the nickname ‘Aggro Aggie’ around the stable.

“She was a cranky bitch, right from the start,” Bennett said.

“We’ve come close to unloading her a couple of times.

“There was one day I came back from the track and I’d had enough, I reckon if someone had offered me a couple of thousand for her, I would have taken it.”

But the team persevered and when it was decided that Sweet Glory would tackle the Adelaide Cup, Bennett redesigned his float so that her kicks would not land and arranged to travel at night so she didn’t think she was going to the races.

Garry Howe shared the inside story of the run that qualified her for the Melbourne Cup.

Sweet Glory arrived in one piece but managed to add a bit of drama to the Cup preliminaries by rearing up and firing lightweight jockey Peter Shepherd to the turf.

Stable foreman Mal Swinley quickly picked up the stunned and angry hoop, threw him the saddle and consoled him.

“This could be your lucky day,” he said.

She proved just how good by finishing a half-length second to Our Pompeii in the Cup.

Sweet Glory started 66-1 in the Melbourne Cup, then worth a cool $2 million, but sadly for the Valley there would be no fairytale result.

English import Jeune delivered trainer David Hayes his first (and to date only) Cup victory, edging out Paris Lane by a length and three quarters.

Garry Howe was there to cover the aftermath for The Express on November 3, 1994.

Trainer Barry Bennett did not want to be seen as searching for excuses for the 17th placing of Sweet Glory in Tuesday’s Melbourne Cup.

However, he did join the chorus of disapproval of a Victoria Racing Club (VRC) decision to water the Flemington track on the morning of the cup to suit the English visitors.

A fast track would clearly have suited Sweet Glory, but the surface was on the worst side of good, according to Bennett, after it had received 2mm of water at 8am and gentle showers had fallen throughout the day.

The track was officially downgraded from fast to good before the third race, but Bennett claims it was never fast.

“Frankie (Stockdale) rode in the first and he said there was a lot of give in the ground then,” he said.

Jockey Peter Shepherd, who had flown over from South Australia to take the ride, said Sweet Glory did not appreciate the track condition when she was asked for an effort in the straight.

“She was travelling nicely on the bit, but she just didn’t go when I let her have her head,” he said.

Bennett claimed the VRC was playing into the hands of the English contingent, led by Vintage Crop’s trainer Dermot Weld.

He believes the VRC indicated that there would be “give in the ground”.

“They won’t change the rules for the locals who have racing going here for the past 50 years, but they will for those who come here for one race a year,” he said.

Bennett said Sweet Glory had pulled up well after the race despite copping a bad check at the 400m mark.

Shepherd told him her condition did not give out, but she just didn’t handle the going.

Sweet Glory would only race four more times after the Melbourne Cup.

She ran third to Exaltayo in an Open Handicap (2574m) at Flemington at her next start in December.

With Greg Childs in the saddle, Sweet Glory belied her 20-1 price to run third, beaten a length.

Sweet Glory retired with a record of five wins and 13 minor placings from 36 starts.