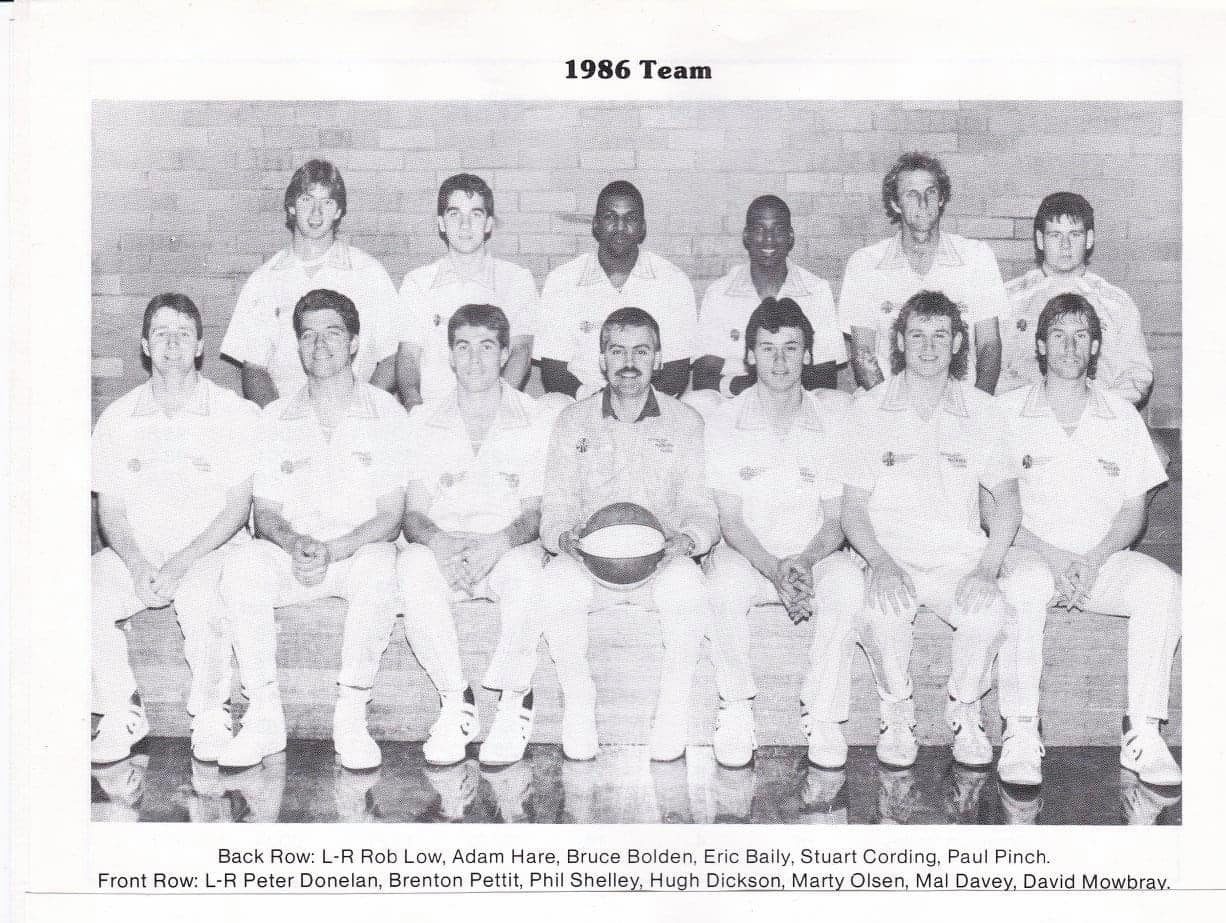 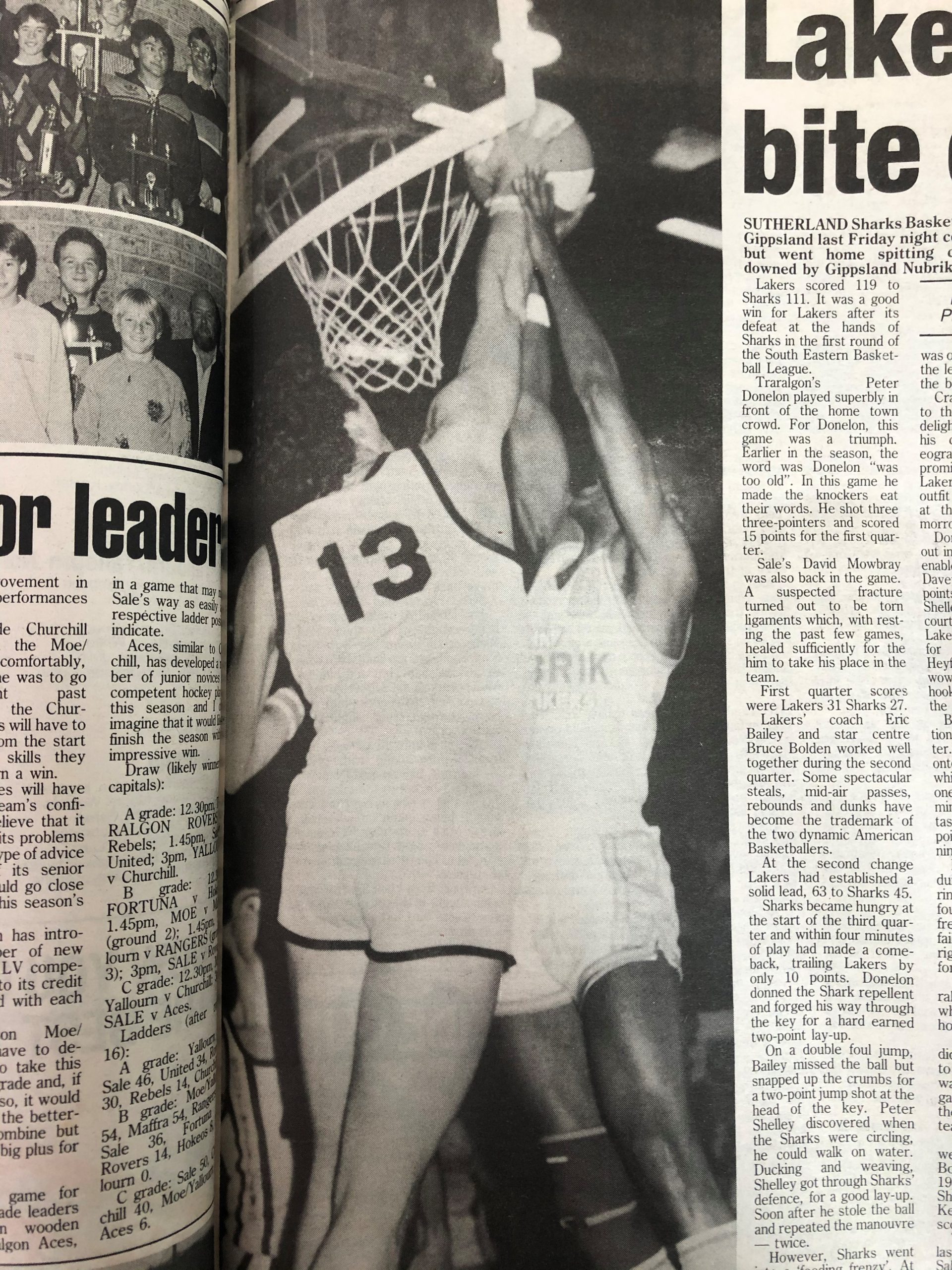 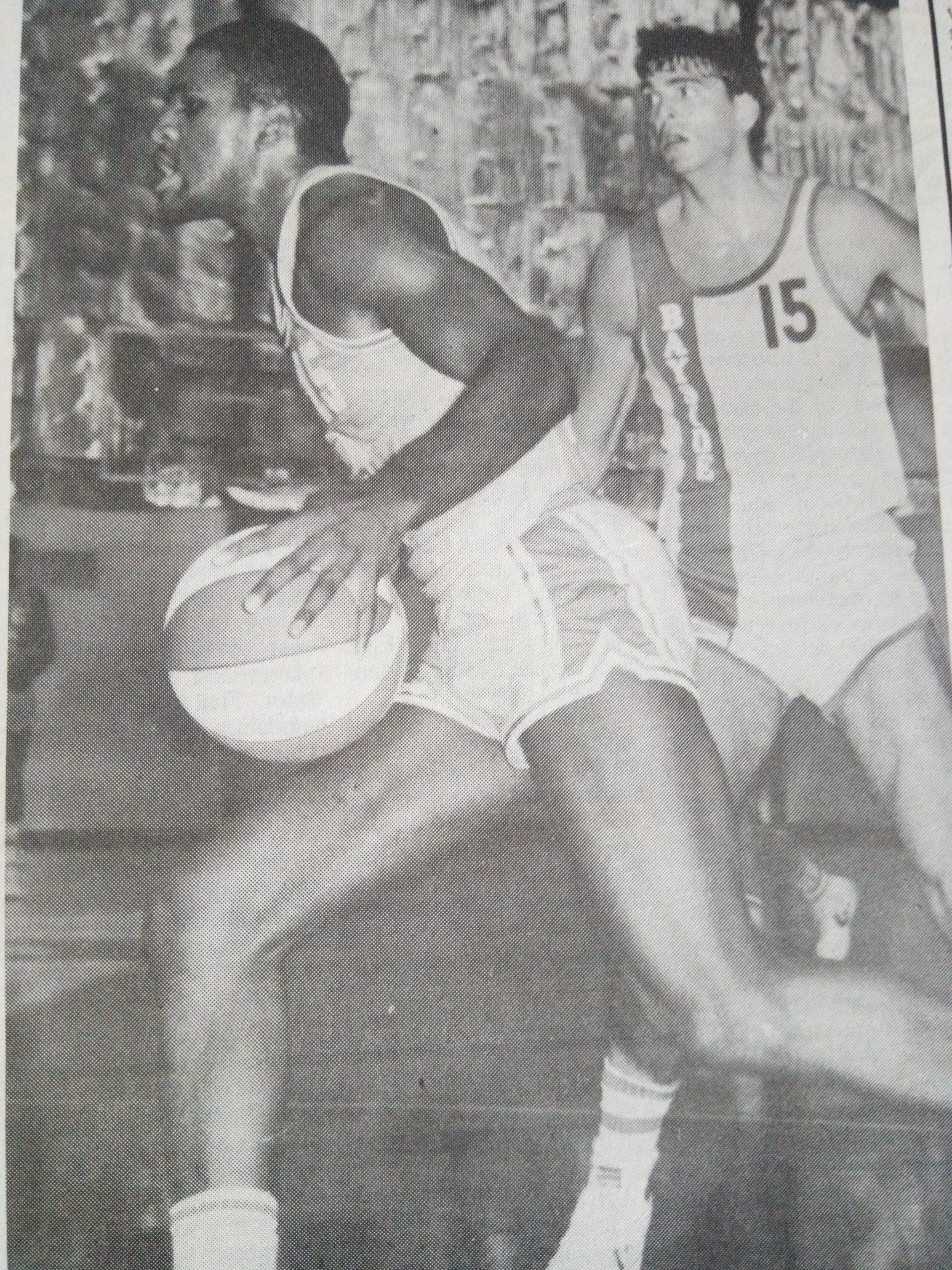 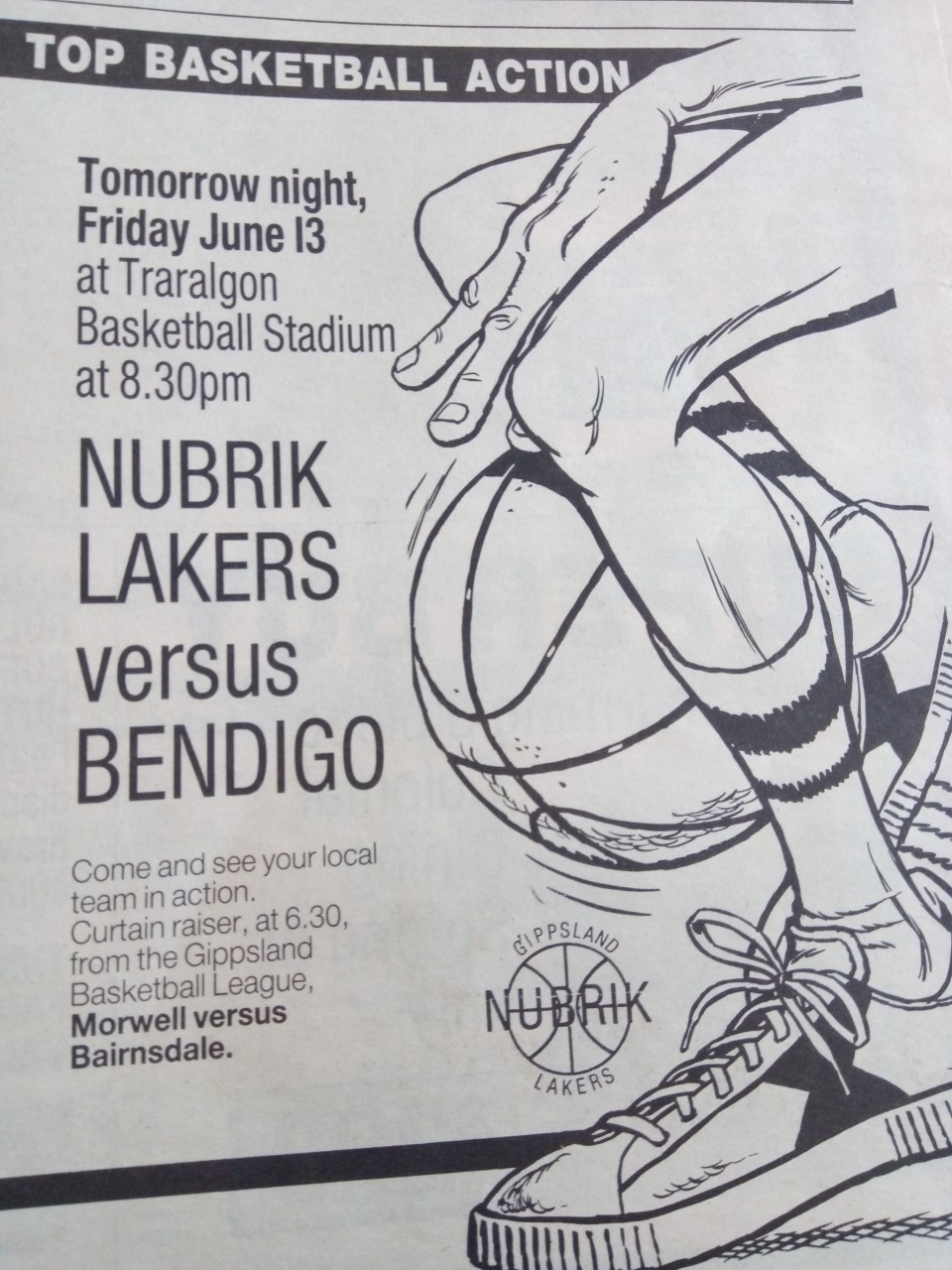 BRUCE Bolden was 23 and had just completed his debut professional season as an import in Norway when he received a phone call.

On the other end of the line was his former Boise State University teammate Eric Bailey, recently appointed player-coach of the Gippsland Lakers.

“They needed another import. I was in Norway at the time and didn’t know much about Australia other than koalas and kangaroos,” Bolden told the Aussie Hoopla Podcast in 2015.

“But I thought to myself, ‘if he’s there, it’s not that bad and if I get homesick I can hang with him until I get over it’.

“I thought Gippsland was just a suburb, maybe 20-25 minutes outside of Melbourne, so I said to him ‘sure, I’ll definitely come over and play for you’.”

When Bolden landed in Melbourne, he soon learned where Gippsland was on the map.

“Two ladies (from the Lakers) picked me up and I assumed I would be playing near Melbourne,” he said.

“As we headed on the Tullamarine Freeway towards the city, I see the tall buildings and I’m thinking city life, fantastic, I must be playing somewhere around here.

“We keep driving along the highway and near Dandenong I look behind me and see there’s no more city, no more buildings, no more high rises.

“I point in the opposite direction and say ‘hey Melbourne is back there, where are we going?’

“One of the ladies said ‘Bruce we’re going to Traralgon – it’s two hours away.’

“I said ‘so we’re not staying in Melbourne’ and they said to me ‘no, but Traralgon is just as good as Melbourne’.”

The year was 1986 and Gippsland Lakers were in the midst of their debut season in the South Eastern Basketball League.

Bailey, who had played in the NBL for the Hobart Devils and Melbourne Tigers, played a starring role with 44 points in their opening round 136-104 win against Grafton.

Despite 36 points from Bailey, the Lakers went down to Knox 140-114 in Round 2, the last game preceding Bolden’s arrival.

A near capacity crowd of more than 500 filled Sale’s Basketball Stadium to see the game between Gippsland Nubrik Lakers and Ballarat Miners last Friday night.

Bruce Bolden, Lakers new American centre player, although only having arrived in Australia from the US that morning, and after just two hours sleep, took the jump.

The crowd erupted when Bolden put a long pass to Eric Bailey and then to Rob Low, who scored under the ring.

The teamwork between Bailey and Bolden was impressive.

Lakers captain-coach Bailey dominated the first quarter for the Lakers with some brilliant basketball.

There were no individual score details for Bolden or Bailey in the report of the thriller which saw Ballarat prevail 100-99.

With the dynamic duo of Bolden and Bailey complemented by an array of local talent including David Mowbray, Phil Shelley, Rob Low, Peter Donelan and Mal Davey, the Lakers soon became the hottest ticket in town.

After a string of narrow defeats in the South Eastern Basketball League, the Gippsland Nubrik Lakers finally broke the hoodoo to record a 111-93 win against the Bendigo Braves at Traralgon on Friday night.

The Lakers committee was delighted with the quality of the promotion co-ordinated by the Traralgon Association that resulted in a home game attendance record of more than 800 jubilant Gippsland fans.

Centre man for the Lakers, ‘Big Bad’ Bruce Bolden proved his value to the team and justified Bailey’s recommendation to bring him out from America by dominating the game with 45 points and 25 rebounds.

Already a favourite with the home crowd and hero to Gippsland’s junior players, he culminated his Friday night performance when in the last quarter he converted a sizzling pass from Bailey into an amazing two hand slam dunk.

That victory was followed by an 89-86 success against Bayside, with Bailey 28 and Bolden 22 playing a key role.

Despite trading in both wins and losses, the fans voted with their feet as this report from The Express on July 10, 1986 illustrated.

Gippsland is in the grip of ‘Laker Mania’ – if last week’s ecstatic, capacity basketball crowd is anything to go on.

Friday’s game at the Traralgon Basketball Stadium between Gippsland Nubrik Lakers and the Grafton Vikings was a sell out.

And as predicted, Lakers let the rockets fly on the fourth of July, despite a soggy fuse to start with.

Bruce Bolden and Eric ‘Ezy’ Bailey were the mainstay against the invaders.

This fourth of July for the American dynamic duo was capped brilliantly with both Bolden and Bailey equal top-scorers at 41 points each.

Bolden had 18 rebounds and 12 blocks.

It was the daring duo of (Marty) Olson and (Phil) Shelley, that had the crowd spellbound with a five-minute impromptu performance of their basket weaving ability, as they tried to untangle the fouled basket from the ring.

But Gippsland struggled to continue that winning momentum in an outstanding competition featuring the likes of the Ballarat Miners, who were then coached by Brian Goorjian.

Goorjian was quoted in The Express in August of that season after his side came away with a 106-101 win against Gippsland.

“It was the toughest game of basketball the Ballarat Miners have ever encountered,” he reflected.

The Lakers had been slipping from playoff contention as The Express reported on August 22, 1986.

Short of a major miracle, it appears following last weekend’s defeats by Bendigo and Kilsyth over Gippsland Nubrik Lakers, that all hope of making the South Eastern Basketball League finals have disappeared quicker than the Australian crime boss Robert Trimbole.

Lakers has the potential for bigger and better things.

Under the guidance of Americans Eric Bailey and Bruce Bolden, the team as a whole has gained considerable experience.

Bruce Bolden had 35 points, Eric Bailey 32 and Phil Shelley from Moe had a superb game, finishing with 17 points.

A 111-78 loss to Newcastle Hunters was the final hammer blow, but the Lakers rallied to close out the season with back-to-back wins.

Sutherland Sharks came to Gippsland confident of a feast, but went home spitting chips after being downed by Gippsland Nubrik Lakers.

It was a good win for the Lakers after its defeat at the hands of the Sharks in the first round in the South Eastern Basketball League.

He shot three three-pointers and scored 15 points for the first quarter.

The final game of the 1986 season saw the Lakers defeat Devonport 123-90 with Bailey 44, Bolden 26 and Mowbray 20 headlining the scoring charts.

The mood in the Lakers camp was one of optimism to build in 1987, although a fortnight after the season, some big news landed.

Gippsland Representative Basketball Association officials said Bolden had received a good offer from Norway, which Lakers could not match.

Lakers had put together a package worth approximately $30,000.

Officials say Bolden’s departure will not be a complete loss, as he is keen to return to the Lakers.

He should be back for the next SEBL season.

As history would have it, he wasn’t.

Bolden’s heroics in Gippsland saw him attract the attention of NBL club Eastside Spectres, who he signed with for the 1987 season.

The American ace would go onto enjoy a stellar career in the NBL over the next 16 years with the Spectres, Westside Saints, South East Melbourne Magic, Sydney Kings and West Sydney Razorbacks.

Bolden won the 1992 NBL championship with South East Melbourne Magic, where he also took out the grand final MVP.

Speaking on the Aussie Hoopla Podcast, Bolden attributed his long career in Australia back to his experience in Gippsland.

“They welcomed me with open arms. The first impression captured me and I said to myself, ‘this is going to be an OK place’.

“A lot of credit and respect to the people of Traralgon for helping me to settle in.

“I wasn’t expecting to be there, but at the same time, I enjoyed my time down there, that season opened up a lot for me.

“It was a great experience, great group of players I played with, the whole Gippsland organisation was very good to me. I’ll always remember those times.”