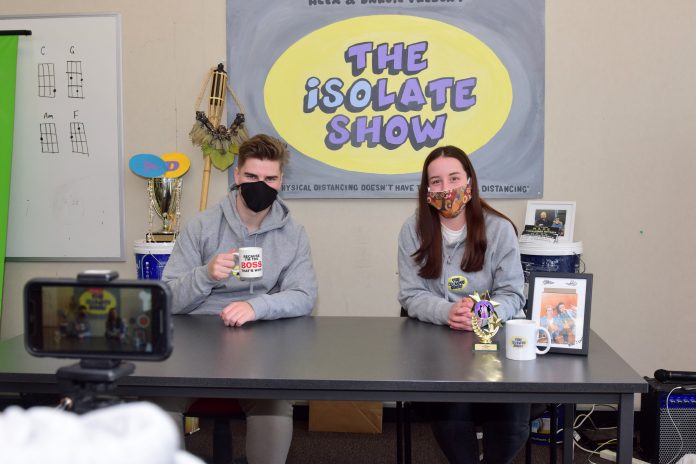 The staff at Newborough East Primary School have battled the elements in Survivor, cooked their hearts out in MasterChef and taken on the world in The Amazing Race to create the IsoLate Show.

What started as a talk show has grown to a widely-watched program, in its second season, the IsoLate Show even included cameos from Survivor All Stars.

Newborough East art therapist and star of the IsoLate Show Darcie White had the idea to create a show for the students in the first round of lockdown.

“I wanted something that we could do something all together so I messaged Alex and Nick and asked if they were on board and it grew from there,” she said.

“It started out as a talk show and then we received such positive feedback that we started doing challenges and it has in the second season.

“Once restrictions were reintroduced we brought the show back by popular demand.”

Newborough East education support Alex Skinner co-hosts, writes, films and edits the show with Ms White, but said he could not have done it without the school community.

“All of the staff have jumped on board and shared their specific skills to make the show such a success, it really is not just me and Darcie making it,” he said.

“It’s been great for the school community, our main point in making it was for the the kids so we are happy to have them seeing it.

“We still have a couple of students on site and they are hanging on each week to see what is happening it is really good to see that they are engaging with it so well.”

Newborough East assistant principal Nick Walsh said it was great to see the show has spread further than the school’s community and has had input and viewers from other schools in the area.

“It is bigger than just us now, we have about 300 students at the school and the latest video had 6600 views,” he said.

“We really wanted to give our school community something to distract them from what is going on and have something to look forward to every week.

“The show has also really springboarded our fundraising efforts, which have been impacted by restrictions.

“We have been selling merchandise to the show and raising money lost when we had to cancel the school fete all those funds are going toward supporting the wellbeing programs at the school which right now is so important.

“We could not have done any of this without the amount of support our principal Julie Skee had the vision that the IsoLate Show could be something great to take people’s mind off the virus.”