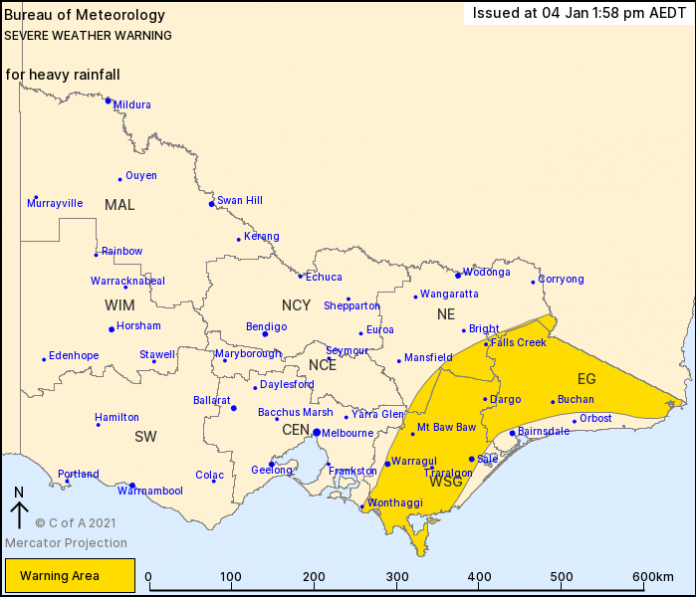 The Bureau of Meteorology has issued a severe weather warning for heavy rainfall across Gippsland, including the Latrobe Valley.

The warning was issued at 1.58pm today for people in East Gippsland, West and South Gippsland and parts of North East Forecast Districts.

Locations which may be affected include Morwell, Traralgon, Sale, Moe, Maffra and Falls Creek.

As rainfall becomes more persistent this evening, heavy rainfall which may lead to flash flooding may develop over southern parts of the West and South Gippsland district from around midnight tonight, extending to the remainder of the warning area during Tuesday morning.

Rainfall totals of around 20-40mm over 12 hours are expected more broadly within the warning area, with localised totals to around 80mm about the peaks and also associated with embedded thunderstorm activity.

* Be aware – heat, fire or recent storms may make trees unstable and more likely to fall when it’s windy or wet.

* Check that loose items, such as outdoor settings, umbrellas and trampolines are safely secured. Move vehicles under cover or away from trees.

* Stay away from fallen power lines – always assume they are live.

* Stay informed: Monitor weather warnings, forecasts and river levels at the Bureau of Meteorology website, and warnings through VicEmergency website/app/hotline.