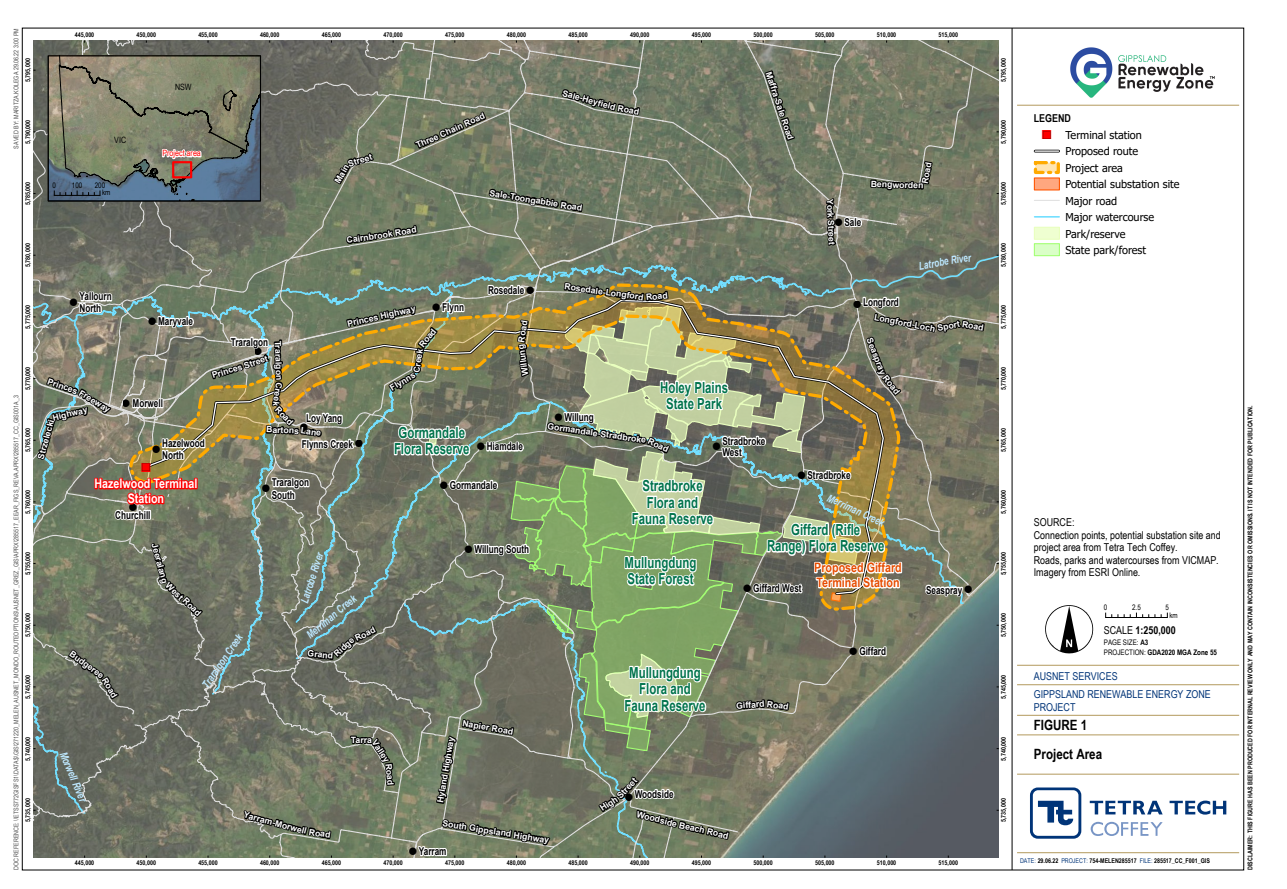 AusNet has unveiled its preferred route for a high voltage transmission line that will run from Giffard through to Hazelwood, helping develop a raft of renewable energy projects in the region.

The proposed route will run south of the Princes Highway and plug into an AusNet terminal station at Hazelwood.

It includes crossing through 48 private properties as well as through corporate and public land, however, the route is subject to change pending further feedback and technical studies.

The power line is being developed as part of the Gippsland Renewable Energy Zone to transmit electricity from 11gigawatts of planned renewables projects.

Construction could start in 2025 or 2026 subject to regulatory approvals and would provide 2100 jobs and then 140 long term jobs over 25 years.

The project will also need to be referred to the Planning Minister to determine if an Environmental Effects Statement is required.

An AusNet spokesman said the final design could include a combination of overhead and underground cables, depending on community engagement, environmental and technical studies.

The spokesman said AusNet had spoken with all landowners along the proposed route before releasing the draft.

“Based on available information, the preferred route minimises the impact with other land uses and sensitive areas, and maximises the opportunities for renewable energy generators to connect into G-REZ,” the spokesman said.

“AusNet is committed to delivering a solution that works for all parties including the community, other key stakeholders and renewable energy proponents.”

G-REZ is one of the first renewable energy zone projects in Victoria, which will connect locally-generated renewables to the grid – including the potential for offshore wind.

It would reduce the need for multiple transmission lines crossing Gippsland from independent renewable energy projects.

The AusNet spokesman said G-REZ would be partially funded by renewables developers in return for access to the grid.

“This gives the project the unique opportunity to look at more appropriate community benefit models, and better payment arrangements for those landholders that ultimately host the infrastructure,” the spokesman said.

It will play a vital role in delivering affordable, clean and reliable energy, and will help prepare Victoria for the retirement of coal-fired power stations.

Committee for Gippsland welcomed the project which would support new energy investment in the region and create employment opportunities for locals.

“Renewable energy projects like those proposed in Gippsland will not only provide new job
opportunities, but also provide training and skill development at local training providers to ensure we can meet energy demand,” Committee for Gippland chief executive Tony Cantwell said.

“This connecting infrastructure will help create jobs and ensure our region’s economy is well-placed to secure sustainable investment in our region’s transitioning energy sector.”