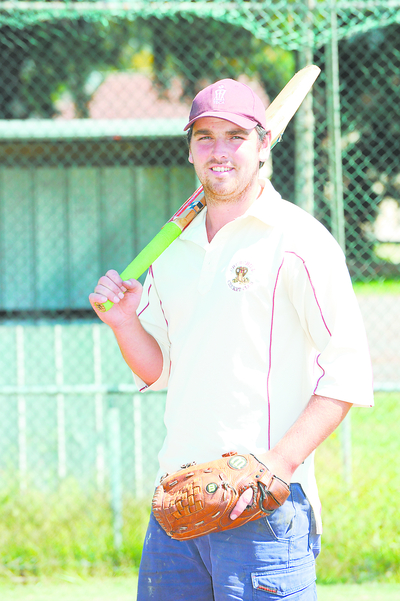 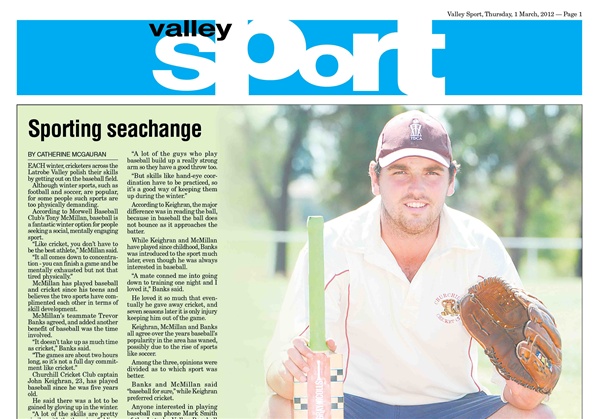 Each winter, cricketers across the Latrobe Valley polish their skills by getting out on the baseball field.

Although winter sports, such as football and soccer, are popular, for some people such sports are too physically demanding.

“Like cricket, you don’t have to be the best athlete,” McMillan said.

“It all comes down to concentration – you can finish a game and be mentally exhausted but not that tired physically.”

McMillan has played baseball and cricket since his teens and believes the two sports have complimented each other in terms of skill development.

McMillan’s teammate Trevor Banks agreed, and added another benefit of baseball was the time involved.

“It doesn’t take up as much time as cricket,” Banks said.

“The games are about two hours long, so it’s not a full day commitment like cricket.”

He said there was a lot to be gained by gloving up in the winter.

“A lot of the skills are pretty similar with the throwing, fielding, catching and hitting,” he said.

“A lot of the guys who play baseball build up a really strong arm so they have a good throw too.

“But skills like hand-eye coordination have to be practiced, so it’s a good way of keeping them up during the winter.”

According to Keighran, the major difference was in reading the ball, because in baseball the ball does not bounce as it approaches the batter.

While Keighran and McMillan have played since childhood, Banks was introduced to the sport much later, even though he was always interested in baseball.

“A mate conned me into going down to training one night and I loved it,” Banks said.

He loved it so much that eventually he gave away cricket, and seven seasons later it is only injury keeping him out of the game.

Keighran, McMillan and Banks all agree over the years baseball’s popularity in the area has waned, possibly due to the rise of sports like soccer.

Among the three, opinions were divided as to which sport was better.

Banks and McMillan said “baseball for sure,” while Keighran preferred cricket.

Anyone interested in playing baseball can phone Mark Smith of the Latrobe Valley Baseball Association on 0408 627 597.