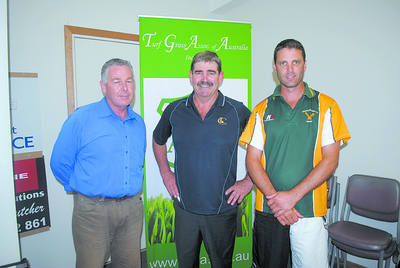 NURTURING a turf wicket is no easy task, according to Traralgon West Cricket Club’s Jason Vanberkel, but thanks to some expert advice his job will be a little easier.

Vanberkel, as long with Rovers’ Danny Worthington, attended a seminar hosted by Les Burdett on Monday night on how to construct and maintain a turf wicket.

Burdett curated the Adelaide Oval for 41 years until 2010.

Vanberkel, who is involved with the maintenance of the wicket at his home ground of St Paul’s, said the job required about 20 to 30 hours of attention per week, so getting some tips from Burdett was a bonus.

“Our ground is only three years old, so it’s pretty good, but a lot of people who play wouldn’t realise the amount of work that goes into maintaining it,” Vanberkel said.

According to Vanberkel and Worthington, the most time consuming aspect of wicket maintenance was the watering cycle.

“For games on a Saturday, you need to water it quite a lot on Monday, then from Wednesday onwards you water it as required.

“But someone has to be around to inspect it and make those decisions, as well as cover it if necessary.”

When asked about how they came to be involved with curating, Worthington said it was a good way of staying involved with a club once your playing days were reduced.

“Once you can’t play as much, but you still want to be involved, it’s another way of doing that and importantly, I have the time to do it,” he said.

Vanberkel said the evening provided him with important information that he could share with others.

In his opinion, many of the turf wickets around the Latrobe Valley were a bit dry.

They both agreed that to be able to learn from someone like Burdett, and so close to home, was an incredible opportunity.

About 40 people attended the seminar hosted at the Maffra Cricket Club.

Burdett interspersed the practical elements of his talk with stories from his time at the Adelaide Oval and tours overseas, and explained the intricacies of turf wicket making from grass selection to irrigation.

One of the main points emphasised was the importance of keeping chemicals like pesticides off the wicket, because they can clog the system and cause drainage problems.

The evening was organised by the Victorian branch of the Turf Grass Association of Australia, with the assistance of the State Government through a country action grant.

Any organisation requiring advice on turf including racecourse managers, council workers and general groundsmen, should phone the Turf Grass Association of Australia on 9791 6900.