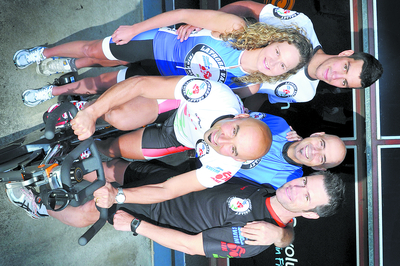 Martin Tullett is no Chief Wiggum, of The Simpsons fame.

Unlike the tubby yellow law enforcer, this Traralgon policeman is preparing to compete in the Melbourne Ironman Triathlon this Sunday.

Tullett, 43, started triathlons in 2008 and has slowly been working up to the ironman distance, which includes a 3.8 kilometre swim, a 180km bike ride and a 42.2km run.

“A few years ago now I started riding to work every day and I was getting a lot fitter,” he said.

“Then a friend talked me into doing a fun run which I struggled with a bit but really enjoyed.

“So I thought I’d give a triathlon a go, plus a cousin of mine did the Hawaiian Ironman back in the 1990s, so there was a bit of interest there already.”

This is the first year the Melbourne Ironman has been held, and Tullett explained even getting a place in the event could be tough.

“Ironman races are advertised about one year before they happen and sell out almost straight away,” he said.

“By the time I’d entered and paid my fee, it had sold out, in less than 10 minutes.

“So another big factor is that to get in you have to be able to sit at a computer, at a certain time on a certain day, which can be difficult too.”

Once Tullett had secured his place, he gradually increased his training distances.

“The frequency pretty much stayed the same, but I started running 10km instead of five, and now I generally run 15 to 25km in a session,” he said.

“It’s definitely something your body needs to get used to.”

Tullett said his preferred discipline changed all the time, but for this race he is most concerned about the ride.

“For this race, I’m probably most worried about the ride, because more than half of its spent on the bike; plus environmental factors like wind, rain etc tend to affect me most on the bike,” he said.

“Swimming is always nice because the water is soft, but at the moment my favourite is probably running.”

Tullett and his fellow competitors will cover 226km during the race, so nutritional planning will be an important part the event.

“Nutrition is so important because if you get it wrong you won’t make it,” he said.

“Everyone does it differently; I try and consume about 400 calories per hour, but you have to work out how you’re going to do it, through power bars, gels or whatever you like.”

Tullett, a member of the Latrobe Valley Triathlon Club, said he was grateful for the advice and wisdom of fellow members who had completed ironmans in the past.

“I guess you tap into people like that for advice.

“It’s handy to have those sort of people around for information and support.”

This Sunday, Tullett will be joined by fellow club members Narelle Harrison, Kevin Peircy, Noel Fenn and Daniel Hahn, who are all competing in the ironman, while Andrew Crozier, Dave Gafa and Costa Demetrios are entering as a team.

So what is Tullett aiming for on Sunday?

“I’m just hoping to finish and that I’m smiling when I do,” he said.