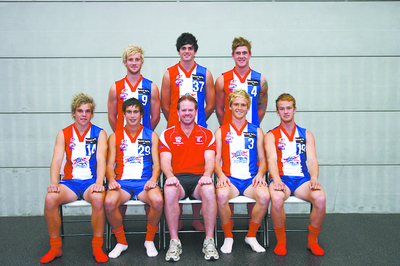 The Loy Yang B Gippsland Power will kick off its TAC Cup campaign this Saturday with a match against the Dandenong Southern Stingrays.

Coach Nick Stevens was extremely positive about how the players had prepared.

“Last weekend we had a training camp at Phillip Island and it was the first time we’d had all the 42 players on the final list together,” Stevens said.

“We had some really close time to work on our game plan, work on some set plays and basically get ready for round one.”

Of the 42 players, 21 attended the high altitude camp that was run by the club earlier in the year.

According to Stevens, it was clear those 21 players had benefited greatly from the camp.

“You could really see their improvement,” he said.

“It wasn’t just in their training performances; a lot of it was in the closeness of the guys who were there.

“All the boys have improved out of sight with their fitness.”

Stevens said he “couldn’t be happier” the club has all 42 players ready to go.

“It’s fantastic that we’ve got the full list to pick from,” he said.

“There’s been a big focus on putting the team first and I think we will be a strong, close-knit group who will play for each other.

“Every time we’re out there we want to try as hard as we can.”

According to captain Tim Membrey, Saturday’s match promises to be a close encounter, with the Stingrays being touted as one of the top teams this year.

“We’ll definitely have to be on top of our game to beat them,” Membrey said.

Membrey, who will miss the first two rounds of the TAC Cup due to his involvement with the Australian Institute of Sport’s AFL program, was chosen as the captain at the Phillip Island camp.

“I was just happy to be in the leadership group so to be named captain is a bit of an honour,” he said.

“I’m really looking forward to having a more serious role in the team.”

Looking to embrace the challenge which lies ahead, Membrey was confident the leadership group and Stevens would be able to provide him with the support he would need.

“Soon I’ll get together with the leadership group and talk through some strategies,” Membrey said.

“Nick too is fantastic; he’s been really good for us.

“He has really good relationship with the boys so I will certainly be looking to him for advice during the year.”

Membrey said missing the first two rounds would be “a bit disappointing”, but he was hopeful his experience with the AIS program would help him with the role during the year.

“This round is going to be interesting because there’s a bit of rivalry between us and the Stingrays,” he said.

“The boys will have to stick together.”

Maffra’s Jack Johnstone will fill in as captain until Membrey returns.