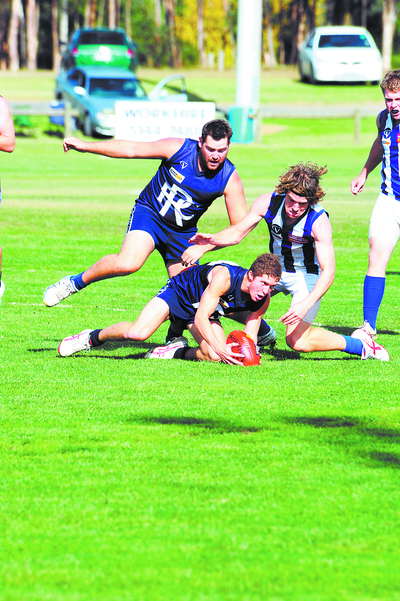 It is hard to read into pre-season form, given how much teams rest and rotate players through the summer to have them ready for the opening rounds.

With movement in the ranks and the addition of new recruits, round one provided football followers with a taste of the season to come. For some, the opening round showed there was plenty of room for improvement, with last Saturday’s matches providing teams with an opportunity to refine elements of their game plans.

Traralgon Tyers United kick-started a new era under coach Daniel Hawking, with an ominous 104-point victory in round one.

This week the Bombers’ resolve will be tested when the new-look lineup faces an early challenge which will see the evolving side pitted against last season’s biggest improvers Cowwarr.

Bowing out of the premiership hunt in the preliminary final, the Saints proved they had not lost their groove holding on in a tight clash against perennial finalists Churchill.

While the Saints’ victory was not as convincing as the Bombers disposal of Woodside, Cowwarr tested its resolve as it withstood the Cougars’ second half challenge. Maintaining a relatively unchanged lineup from 2011, Saints coach Cory Bannister said he was confident the past three seasons had laid the foundations for success.

“With the limited changes to our list we are hoping for incremental improvement as we slowly lay the foundations to build success, ensuring that it is more sustainable into the future,” Bannister said.

Round one saw the Bombers get good mileage from their new additions against Woodside.

Daniel Loprese made his mark in front of goals booting five, while Brian Graham was impressive in his second season at the Bombers. Lacking consistency in past seasons the Bombers were ruthless in their four-quarter effort and will need to deliver another consistent performance to overcome a tough Saints outfit.

Heyfield went down to Rosedale in a round one thrashing and will do all it can to avoid a 0-2 start.

Outplayed in most areas, Heyfield’s coaching panel will go back to the drawing board ahead of its round two clash against Gormandale. Left wanting following a blistering performance against old foes the Blues, Kangaroos coach Adrian Cox will be seeking a lift in intensity from his players.

Noting prior to the season that it would take “a few weeks” for his side to gel following the inclusion of some 12 new players to the lineup, coach Paul Richards is being patient with his squad.

Glengarry failed to kick start Ryan Potters coaching career with a first up victory. On home turf it is a different proposition, the Magpies demonstrating in past seasons that it is a tough prospect for visiting sides to leave with the four points.

Unearthing a number of young stars, Woodside’s new-look lineup struggled to match the stronger more physical bodies of TTU. There will be little let up with this week’s opponents damaging midfield set to cause more headaches for coach Luke Anedda.

In a stirring revival, Churchill fell a kick shy of a round one victory.

While it failed to walk away with the points, the side’s intensity and improvement in the off-season has gained the attention of opposition coaches.

Following a number of classic contests in previous seasons, the Cougars will host Rosedale at Gaskin Park.

Sending a clear warning to the competition with their 16 goal second half against Heyfield last week, the Blues looked sharp with their attack.

However Blues coach Damien Birss said he was not getting too carried away with the first up victory.

“Winning the opening game is a good start, but by no means can we get carried away about winning one game,” he said.

“We prepared well for the start of the season, the result is what we prepared for but we know that Churchill this week at its home ground is going to be a massive task.”

Starting out strong in its opening clash, a young Boisdale-Briagolong outfit got off to a flyer in one of its best starts to a season in recent years.

This week the Bombers host reigning premiers Sale City, that will come into the match on the back of a nine-goal victory.

It is a daunting prospect for any opposition side; however, the Bombers will be confident their young lineup will have the legs and ability to run out the game.

There is little doubt coach Daniel Sandeman would love nothing more than to claim a big scalp like the Dogs.