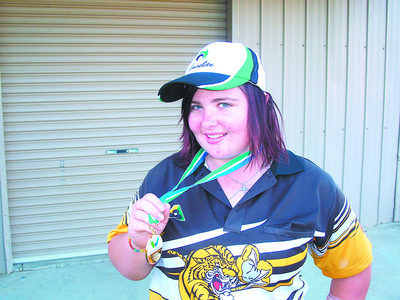 Newborough’s Lisa Phillips has added another title to her ever-growing list of honours.

Last weekend the 18 year-old took out the Victorian Singles bowling title at the Bendigo East Bowling Club, becoming the youngest person ever to win the prestigious event.

The Richmond Union player displayed grit and determination in the final against Cobden’s Doreen Coverdale, fighting hard for every point and managing to hold onto her 15-5 lead despite Coverdale’s best efforts to scramble back.

Coverdale worked her way back into the match, and soon enough she had clawed back to be only three points down, 17-20.

After what appeared to be a temporary loss of focus, Phillips regained composure and scored three in two ends to take the score to 23-17.

Fighting off yet another attack from Coverdale, Phillips went into a nail-biting final roll to save the lead.

In fantastic style, Phillips closed the match out 25-20.

With the state singles title under her belt, Phillips left for the Gold Coast earlier this week to represent Victoria in the Australian Sides Championships that will run until 24 April.

Following this event, she will continue training with the Australian squad and playing for her club Richmond Union.