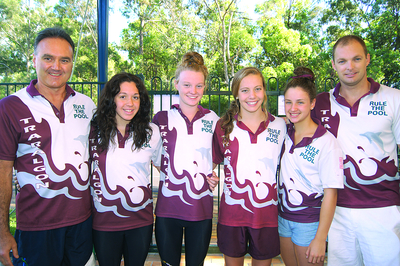 FOUR swimmers from the Traralgon Swimming Club found themselves ruling the pool at the recent Australian age championships in Brisbane.

Breaststroker Erin Roberts said the girls went “a little crazy” after they won.

“I don’t think the officials have ever seen anyone jumping around and yelling like we were,” Erin said.

“It was such an amazing feeling, parents and coaches were crying.

“We worked so hard for this and to see that it’s not all for nothing, it was just a really proud moment.”

Erin said the girls train nine times per week, with two sessions starting at 4.40am and ending at 7am.

“On those days we usually train in the afternoon as well,” she said.

“It’s pretty demanding, but we wouldn’t be doing it if we didn’t love it and it’s heaps of fun swimming with all your friends.”

Leading up to the race, Erin said there was “quite a bit of pressure” on the team, but they managed to remain calm.

“It was tricky because we all knew what we had to do – we had to be calm but at the same time ready to rip it up in the pool,” she said.

“We just sat together in the marshalling area and talked and tried to focus.”

For the rest of the year the team will aim to break the national record in their age group.

However, next year Taylah will move into the next age group, meaning that a new freestyle swimmer will be selected to join Annie, Erin and Mikaela.

According to Erin, it will be a hotly contested position.

“I think we’ve got about four or five girls who will be looking to get that spot, so Brian will have a few to choose from,” she said.

The girls recorded a time of one minute and 59.78 seconds, which was a Gippsland record, and they were the first Victorian country team to win a gold medal at that level.

Traralgon Swimming Club senior head coach Brian Ford said the victory was one of the biggest achievements in the club’s 55-year history.

“The club has won individual gold medals at national level with Jeremy Saunders and Jeremy Meyer… however, to get a combination of girls from this area, which is relatively small… and beat them convincingly is truly an unbelievable and outstanding performance,” Ford said.

“We are so proud of their achievement.”

Overall the club had a successful event, coming 25th out of 250 representative teams, making 16 finals, setting one Victorian, eight country and 12 Gippsland records.

Sixteen year-old Lily Collins won the silver medal in the 100m breaststroke in a time of 1.11.24, setting a new country age and open record.

Her performance has secured her a place on the Australian junior representative team in October.

Making a staggering four finals, Annie Pepper won bronze in the 100m backstroke in a time of 1.05.56.

Ford said it was one of the most successful teams the club has ever taken to the nationals.

“Our best performance was in 2008 when we finished 24th; however, that was with a number of older and more experienced swimmers,” he said.

The club will hold its presentation night on Saturday 5 May where it will celebrate the achievements of another outstanding season before beginning the 2012/13 season with the Blast Off Meet in June.