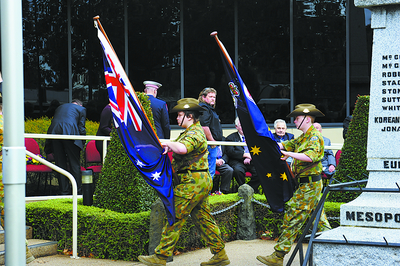 Hundreds of past and present members of the armed forces, relatives, scouts and the Caledonian Pipe Band paraded through Moore Street, Moe to mark the commemorative day.

Moe Returned and Services League president Ray Watson said the service was about honouring the efforts and sacrifice of Diggers representing their country during conflicts.

Mr Watson said he was moved by young and old supporters who turned out to watch the service which proved the Anzac spirit was “alive and kicking”.

A special tribute was made as New Zealand’s national anthem was played during the service.

“So many people nowadays accept life as it is and don’t understand the sacrifices which have been made,” Rev Payne said.

Earlier, hundreds gathered in the darkness for the Moe RSL dawn service which included a powerful minute of silence as they paid their respects to Australia’s fallen.

“We didn’t win and it wasn’t even our battle but yet they unified our newly federated nation and from that we (Australia) had our identity,” Sub-Lieut Fearnley said.

Draped in his great-grandfather’s badges who served in World War II, Sub-Lieut Fearnley said he was proud to be able to participate in the ceremony.

“I am proud to follow in the footsteps of the people who have previously served and to keep this tradition going,” he said.

“Anzac Day lives on. The number of diggers we have is falling but the number of people honouring them is still strong.”

25/06/2021
STATE Resources Minister Jaclyn Symes has revealed a previously undetectable weakness in the ground as a key factor behind the current woes at the...