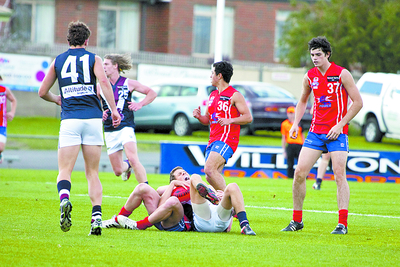 WARRAGUL and Bairnsdale caused the biggest upsets of the season, beating heavyweights Maffra and Traralgon respectively.

Moe is the only side yet to post a win.

Bairnsdale’s 63-point winning margin over Traralgon equalled its biggest win over the Maroons since Bairnsdale joined the LVFL in 1960.

After an even first half, the Maroons were down to the bare 18 and Josh Jennings said Bairnsdale was able to use its running game with fresh legs.

“You are not going to win games when you kick two goals to the opposition’s 11 after half time,” Jennings said.

“This game we played three first gamers in Ben Northover, Tim Hendricksen and Rohan Hildebrand and will probably use another three this week.”

Hendricksen and Northover were named amongst Traralgon’s best along with Jordan Symons, Matt Jones, Michael Geary and Jamie Aitken.

Dan McKenna kicked three from limited opportunities and was moved to the midfield.

Cam Streeter gave the Redlegs running drive from half back and Josh Gibbs’ mobility gave the Traralgon defence and midfield a few headaches.

Moe put up a gallant performance against a taller and stronger Wonthaggi Power.

Jason McFarlane said his team showed a lot of improvement and it will not be too long before they get a win.

“We were very competitive,” McFarlane said.

Andrew Seccull was great in the first term for the Power kicking three of their five goals, but was kept quiet after James Needham went on him.

The Power started the game kicking the first three goals.

Tom Long suffered a broken nose later in the game.

Power maintained their accuracy in the first four minutes of the second term, with goals to Lucas White and Aaron Ware taking them to a 29-point lead.

From that point, Moe got back into the game with Peter Yates kicking three and Long two to hit the lead late in the term.

The third term was a battle of the defences with the Power adding three goals to Moe’s solitary goal kicked on the siren by Geoff Atkinson.

In the finish Wonthaggi were too strong, winning by 26 points.

Morwell went down to Leongatha and despite breaking even with the Parrots in the second half, the damage was done.

Damien Kerr said his side was “terrible” in the first half but added they played their best football for the season in the second half.

“This game gave our players a lot of confidence,” Kerr said.

Tom Crosby was given the job on Will Thursfield and did an excellent job shutting him out of the game.

Adam Bailey sparked the revival after half time and the Tigers showed they were more than capable of matching it with the best sides in the competition.

After an unlucky loss against Morwell, the young Warragul side backed up with a narrow two-point win against Maffra.

The Eagles jumped out of the blocks with a five goal first quarter and did not kick another goal until the last quarter, scoring just 10 points in the second and third terms.

Warragul held control in the midfield and showed great tenacity to regain the lead in the final term.

Clinton Rowe, Ben Drew and Matt Gray were great for the Gulls and Darcy Brown and Ben Hughes kicked three goals each.

Maffra’s best were full back Sam Bristow, Kelvin Porter and the ever reliable Daniel Stubbe and Daniel Bedggood kicked four.

Sale smashed Drouin by 95 points, with all of Drouin’s three goals coming in the final term.

The ball did not get past the defence of Chris Laverty and Jordan Dessent too often, and they sent the Magpies into attack consistently all day.

Luke Collins and Adam Wallace were winning the midfield and it was hard to pick a Drouin player that held his own all day.