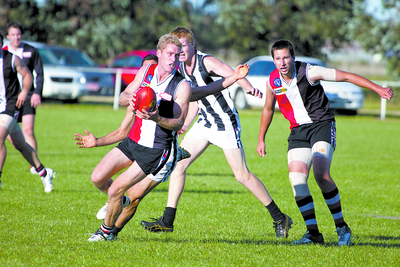 Daniel Sandeman’s message for his team is “no more excuses”.

Highlighting that a number of changes will be likely ahead of this week’s clash against Woodside, the Boisdale/Briagolong coach is frustrated with his young side’s performance in the last two rounds.

“In round one we played brilliant footy, the boys played four quarters of good team orientated footy since then we have been poor in patches,” Sandeman said.

Embarrassed by their second quarter against Heyfield last week, Sandeman said he knew his side had potential, but is at a loss to explain their frustrating form.

“Our second quarter against Heyfield was very embarrassing, we found a bit after half-time but it wasn’t pretty footy,” he said.

“There’s the excuse that as a young side that it can be explained, but it’s not an excuse because the guys have so much potential.”

Aiming to get their season back on track, Sandeman knows that with only three wins in two seasons his side cannot be complacent against the winless Wildcats.

The two sides have boasted quite the rivalry since the Wildcats’ induction to the league, and Woodside coach Luke Anedda expects this week’s clash to be the same.

“It is always a tough gig at Boisdale, a hard contest which the guys are looking forward to,” Anedda said.

Similar to the Bombers, the Wildcats have played patchy football in the opening rounds, but took their game to a whole new level against the reigning premiers, Sale City.

The final score did not reflect how close the Wildcats came in the third term and Anedda was impressed with the quality of football his side played.

“Our intensity and energy in the first two quarters was right up there, we didn’t bring that to our game against Glengarry while we showed patches of it against TTU,” Anedda said.

“If we can focus this week on our energy and want for the ball, and put it together for four quarters then I am confident that we can get the win.”

Churchill came to life last Saturday as it opened its season account with a comprehensive win on the road.

Getting its season back on track with a morale boosting victory, the Cougars’ resolve will be tested when they host Heyfield.

But it will not only be the Cougars that will be closely watched, with Heyfield’s credentials as potential finalists to be put under the microscope at Gaskin Park on Saturday.

The rivalry that developed in the 2000s will continue this Saturday, with the four points highly sought after.

Sale City highlighted the difference between the league’s top and bottom sides, with a dominating 96-point win over Woodside on Saturday.

The Dogs however will need to up the tempo this week when they host the Saints.

In these early stages of the season, Cowwarr looks a shadow of the side that made it to the preliminary final in 2011.

The Saints find themselves in a similar situation to last season, and will be confident that they can turn their fortunes around with a win against the reigning premiers.

Led by club stalwart Trevor May in a best on ground performance, Glengarry has been a force recently.

Drawing what many would describe as the toughest start to the season, Rosedale has barely battered an eyelid at the prospect of meeting four top sides.

Rather, it has gone about it its own way, sending a clear message to opposition coaches it is the real deal.

Accounting for Heyfield, Churchill and Traralgon Tyers United, there is plenty to like about this Blues outfit that is far from full strength.

The Magpies will be wary of this week’s opponent, as the Blues have become the thorn in Glengarry’s side.

This week the Traralgon Tyers United coaching panel will need to go back to the drawing board with the side’s forwards failing to fire under defensive pressure.

This week they will host the lower ranked Tigers that remain one of two sides still searching for their opening win.

Facing a rebounding Bomber lineup is a daunting prospect for Gormandale, a team that remains a work in progress.