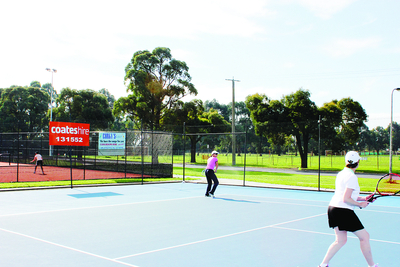 The annual Tuesday women’s Mother’s Day luncheon inspired many of the women to play an exceptional standard of tennis. The match of the round was played between fourth placed Nike and last placed Lacoste.

Nike was able to secure a four sets to two victory, showing the closeness of the competition.

Lyndal Pettie secured her first three-set win of the season, ensuring her team’s win 37 games to 34.

The remaining four matches were all five sets to one wins for Sfida, Reebok, New Balance and Asics.

The win to New Balance over second-placed Lotto ensured they held onto top spot on the ladder.

Reebok and Dunlop were also fighting for positions in the top four and played quality tennis all day, but three set wins to Helen Paulet and Sally-Ann Bahuth was the difference between the two sides.

Other three set winners from the day were Robina May and Maxine Murray from Asics, Val Kennedy and Tanya Goodwin from New Balance and Sue Timms and Heidi Devlin from Sfida.

With four rounds remaining, the top four positions are far from settled with anyone from fifth to ninth place still able to make it.