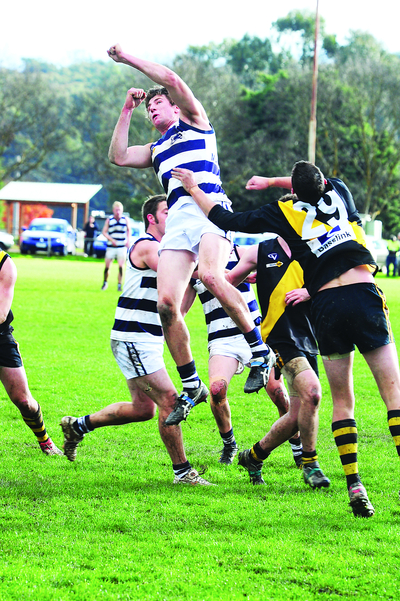 SATURDAY is shaping as a season defining match for North Gippsland football’s Cowwarr and Gormandale.

The Saints have impressed in recent weeks after a slow start to the season following a tough draw.

Rallying in the final term last Saturday to come within eight points of Rosedale, the Saints can draw plenty from their performance.

While the Saints have shown they are not too far off the mark, the Tigers remain a work in progress.

There is no questioning the Tigers will need to refocus this week if they are to improve on their win-loss ledger.

For the Saints, Saturday’s clash against the Tigers will further test their strength and resolve, and will act as a barometer to see how far Cowwarr has come over the past month.

Relegated to eighth position and two games out of the top five, a win would keep the Saints in contention for a finals berth.

Former Carlton premiership player Anthony Koutoufides will watch the action from the boundary line this Saturday, when Sale City host the sixth-placed Cougars.

Handed their second defeat in the past three weeks, reigning premiers find themselves in unfamiliar territory sitting in second place and will be further challenged by Churchill.

If past seasons’ results are anything to go by, there is no questioning the Dogs will go into the match as favourites.

However, Churchill is a different prospect from past seasons and will be hungrier than ever to claim bragging rights.

Churchill proved last week that they have the depth to cover the omission of some eight senior players from their line-up and held strong against the Magpies.

At this point in the season Rosedale has assumed the premiership favouritism.

Accounting for Sale City and Cowwarr in recent weeks, Glengarry is the only side that has been able to halt the Blues’ impressive run.

Convincingly beaten in round seven, the Bombers will be handed one of their biggest challenges to date when they travel to Rosedale with the side’s backline to face the competition’s number one forward line.

Searching for their first win of the season, Woodside led from the front in the first quarter at Gormandale last round before being overrun by the Tigers.

While the four points remain elusive, the Wildcats will need to focus on this week’s contest which will provide little reprieve for the winless Woodside.

Heyfield made another emphatic statement on the weekend, playing irresistible football and cementing their hold on fifth position on the ladder.

Finding their way in recent weeks with comprehensive victories over Churchill, Glengarry and Sale City, the Kangaroos have sent a clear message to the competition that they are indeed a dark horse for the premiership.

Glengarry will be keen to prove it is still a serious finals contender, aiming to rebound from consecutive losses.

The Magpies slipped up against competition front-runner Heyfield, with the side’s wings clipped against the Cougars.

Dealt a heavy hand with injuries to key players, the Magpies benefited from the return of coach Ryan Potter against Churchill.

With the side sitting behind this week’s opponent, a win against a top-five side would provide Glengarry with an injection of confidence ahead of the week’s break.

Brushing aside its opponent in a dominating performance last week, TTU will be tested against the fourth placed Magpies.

Winning two on the trot the Bombers will go into the match confident they can extend their winning streak to three; however, the Magpies are a tougher prospect as past weeks results reflect and will certainly test TTU’s premiership credentials.