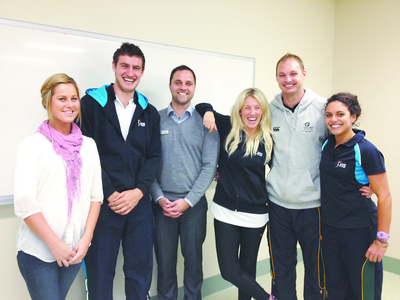 FOR students of GippsTAFE’s revamped certificate four of sport and recreation, combining knowledge with practice is essential.

As of this year, students in the course now study three streams: coaching, development and health and fitness.

According to program coordinator Scott Douglas, the course was broadened to provide graduates with greater employment opportunities.

“The old course was really broken down into specialties, and this way students can learn a wider range of skills and specialise later on if they want,” he said.

The athletes talked about their training practices, as well as their journeys to becoming professional athletes.

“Ultimately, these are the kind of people the students could end up coaching,” Douglas said.

“It’s great for them to see the practical side of what they’re learning – for example, Christian (Williams) has a heart condition that severely affects his ability to train.

“These are the kinds of things they will have to be aware of and know how to manage when they go out and get jobs.”

Douglas said the athletes enjoyed the session so much he “couldn’t get rid of them” at the end of the day.

When asked about how the expected TAFE cuts would affect the course, Douglas confirmed the course would still be on offer, but a gradual fee increase would be likely to occur.

“The course has a really high employment rate (after graduation) so it’ll definitely continue, but there will probably be fee increases over time,” he said.

Interestingly, Douglas said sport and recreation courses generally had been “hard hit” by the rise in private service providers.

“It hasn’t happened here (in Gippsland) as much as in Melbourne, but there’s been a massive increase in businesses offering personal training-type courses that don’t provide people with that professional qualification,” he said.

“They often entice people to the courses because they’re short (in duration) and usually don’t cost as much as a TAFE course, but they also don’t have the quality control, like for our course teachers have to have at least five years industry experience before they’re considered.”

Douglas said he and other operators of the course had worked hard to “build networks” with local businesses in the fitness industry, which may be part of the reason the private provider model had not taken off in Gippsland as it had elsewhere.