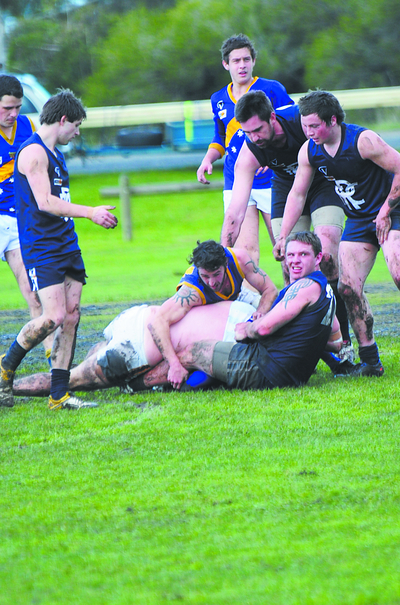 The Saints marked their intentions early, slamming home the first before Chris Stasinowsky kicked consecutive majors, then Robbie Ferguson swooped on the ball to kick Cowwarr’s fourth in 10 minutes.

In the second quarter it took 10 minutes before Des Brunt broke through to register one of his four for the day, before Graham added another and the Bombers began to stamp their mark on the contest. A late goal to Cowwarr handed the side an eight-point lead at half time.

Play centred around the Saints’ forward half at the start of the third term, with Brett Street snapping true before Brendan Smith added another following poor disposal by the Bombers’ backline.

Smith roved the pack to snap his second for the term, after captain Luke Cooper got down on his hands and knees to tap the ball out to Smith, the Saints’ major blowing the margin out to 31 points.

A quick goal by Brunt from the opening bounce of the final term provided the Bombers with some spark. He then added another to make it four unanswered majors and bring the margin back to 12 points in a five-goal turn around.

However Stasinowsky stood tall in a five-minute purple patch, booting consecutive majors to seal victory for the Saints victory, 13.12 (90) to 9.6 (60).

Heyfield returned to the winners’ list with an emphatic 111-point victory over Gormandale, but it was not until the second half it found its form and broke free of the Tigers.

The Tigers stayed with the visitors in the opening half with 20 points separating the sides at the main change; however, the challenge was short lived with the Kangaroos’ 15-goal to one second half highlighting their dominance.

Heyfield forward Jesse Leeds was strong in the forward line with his seven goals, aided by Nic Dowse and his fellow midfielders.

Eight goals from Glengarry’s Shaun Barnes was one of the highlights of the Magpies’ triumph over Woodside.

Exploding out of the blocks in the opening half and slamming on 12 goals in a dominating performance, the Magpies’ strong start put the Wildcats 53-points behind at the main break.

Glengarry’s momentum continued in the second half, adding a further eight goals.

Matt Royal was named best on ground for the Magpies, with Robbie Cahill and Chris Wangman valuable contributors.

Barnes was the pick of the goal kickers finishing the match with eight, and key forward Josh King booted five. For the home side Josh Griffin put in a best on ground performance.

Sale City cemented its hold on a top three finish, following its 14-goal victory over Boisdale/Briagolong.

Playing on the Sale Main Oval, the Bombers struggled to match the Dogs that were without star player Jake Schuback.

Churchill came out hard against Rosedale with little separating the sides throughout the contest.

Leading by three points at quarter time, the Cougars stuck to their plan.

The Blues answered the challenge in the second quarter outscoring the visitors to take an eight-point lead into half time.

Locked at 8.10 (58) a piece at the final change, the Blues stood tall under the pressure scoring three-goals to one and taking their winning streak to seven.

Rosedale midfielder Dale Fleming was impressive; Dom Keating continued his stellar form in his return season providing plenty of run off half back with captain Chris King steadying the ship in the final term.

For the visitors Alex Tatterson was a standout in a best-on-ground performance, Joey Whykes was solid while Dale Paterson was the pick of the goal kickers.