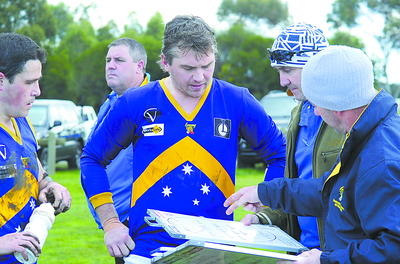 After some disappointing finishes, Churchill will have to do something different against Gormandale this Saturday in North Gippsland football.

“We’re not finding a way to get the job done when it matters,” Darby said.

“The last fortnight we have been leading the opposition in the last quarter to get overrun.

“It is hard to put a finger on it, out of the six games that we have dropped we were in front for three of them in the final term, every game has been different; it hasn’t been any one thing.”

Confident his side can compete with the competition’s best, Darby noted the coach’s mid season review highlighted some positives with the club moving in the right direction.

“There were lots of positives to come out of the midyear review meeting, but we are fully aware that success is judged on where you finish on the ladder,” he said.

“As long as we can make finals that is what we are aiming to do, it’s quite simple we need to beat sides that are above us on the ladder and we can probably make finals.”

Cautious of this week’s opponent Gormandale, Darby noted his side can ill afford to be complacent leading into the contest.

“Gormandale upset us in the second half of last season… if we don’t put our best foot forward it will bite us,” he said.

Traralgon Tyers United will aim to avenge its round three 66-point thumping by ladder leaders Rosedale this weekend.

While four points separate the Bombers from Glengarry and Cowwarr, a loss this week would bring them back into the middle of the ladder and test their resolve in the second half of the fixture.

The contest between Glengarry and Cowwarr promises plenty.

Describing this week’s clash as an “eight point” game, Cowwarr coach Cory Bannister is full of praise for his chargers’ ability to regroup and focus in past weeks.

Bannister is adamant his team’s best is still to come after the Saints continued their climb up the ladder with a 30-point win over TTU.

“We had a tough start to the year; our preseason wasn’t one of our best and it took us a bit longer than hoped to lock down a fairly unchanged line-up from 2011,” Bannister said.

The past fortnight can be described as season defining for last year’s preliminary finalists who were quickly slipping out of finals contention before stunning higher placed opposition to again be in the hunt for a top five spot.

“We really sold it to the guys over the past two weeks that we were playing for a finals berth, they have been really important games for us and will certainly dictate if we play finals or not,” Bannister said.

“We have an opportunity to cement a finals spot or keep the door ajar for someone else.”

It has been a tough fortnight for Boisdale/Briagolong and the going is not going to get any easier against Heyfield.

“Overall it has been a disappointing season, one which hasn’t been helped by injuries,” Sandeman said.

“It has been our lack of effort that has been most disappointing, I can handle being beaten but when your work rate and effort isn’t there, it’s disappointing.”

However, injuries have given Sandeman the opportunity to play younger players.

“We will continue to play these kids, hopefully we will find a few gems for next season but our focus from now until the end of the year is to develop these kids,” he said.

In contrast, this week’s opponent Woodside is still searching for its opening win and will be looking to put a strong showing in against the Dogs ahead of their eagerly anticipated clash against the ninth placed Bombers.