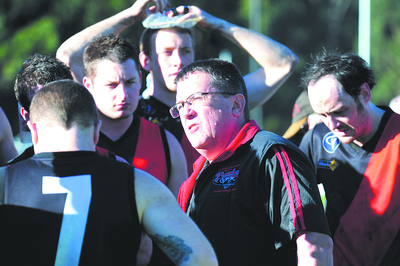 Last time Boolarra met Newborough, the Dogs embarrassed the reigning premiers with a 90-point thumping, but it is unlikely their round 13 Mid Gippsland clash will be as one-sided.

Newborough coach Allan Chandler said Boolarra prides itself on winning the contested football, and the Dogs will be looking to beat them in that area.

Two key players for the Dogs, Luke Webber and captain James Todd, should be back in the side this weekend.

Chandler said Newborough’s best football is still ahead of them and settling the side will be important to realising its potential.

“We’ve just got to keep putting our best foot forward and hopefully some better footy’s just around the corner,” Chandler said.

Morwell East and Yallourn/ Yallourn North face off this weekend in a battle for fifth spot.

With a win on the weekend Morwell East could snatch the spot back through percentage, but if the Bombers win the Hawks will be two games out.

Bombers coach Tony Price said every match was like a finals game for his side that needed to keep winning to make that contest for the flag.

“This week will be a good indicator of if we should be up in the five or we shouldn’t,” Price said.

The Hawks have lost a few close ones this year, including to top sides Trafalgar and Newborough last week.

Morwell East coach Paul Henry said he knew his side was good enough to win the games, but just had not been getting the results.

“I think bar the Yinnar game I’ve been impressed with the playing group since our last loss to Yallourn/Yallourn North,” Henry said.

The Panthers had their first win for the season last week and have restored the belief that they can play good football.

Coach Shaun Kleeven said with that mind set and the same team as last week, the group was looking forward to playing the Hillmen.

The race for a finals spot is getting very competitive and the next few games are important for Hill End, that has to beat lower-placed teams to restore its confidence before games against Trafalgar, Morwell East and Yinnar.

If Yarragon is able to stop the Hillmen’s run on, this could be a much closer game than last time they met.

Mirboo North is close to cementing its top three finish, while Yinnar will be looking to fight back after last week’s loss to the Bloods.

Mirboo North has continued its winning streak and has not been beaten since it played Trafalgar in round five.

It will take a lot for the Magpies to beat them.

Thorpdale slipped to the bottom of the ladder and is likely to have trouble against Trafalgar.

Trafalgar coach Chris Kyriacou said he expected a good match on Saturday, and Thorpdale will play as a physical side.

Kyriacou said the Bloods have not had a settled side this year, but last week they finally found the right mixture of younger and more experienced players.

“I’m very confident that the side that played on Saturday is going to be hopefully the side that will push us into the finals,” Kyriacou said.

Blues coach Brett Sherriff said he thought the boys took a step backwards last week and a lot would be worked on at training to get the side back to its best.