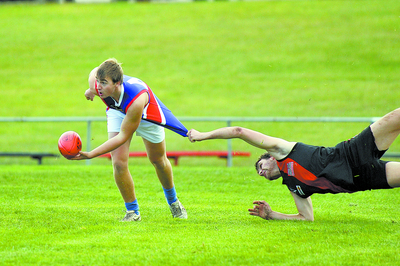 Wildcats coach Luke Anedda is confident his side can break through for its opening win.

“We hope it’s the week, we have been working towards it and although the scores on the weekend gone where pretty ordinary and not flattering at all, we hope that if we put in a good showing that we can get the win,” he said.

“It has been a tough month, a tough season; we have met Traralgon Tyers United, Glengarry and the reigning premiers in past weeks and it makes it hard to get the boys up and about.”

It has been a tough initiation to the senior coaching ranks for Anedda, but said he appreciated the improvements that have been made.

“We have definitely improved in patches, but with players in and out of the side it has made it very hard for the younger guys to adjust to playing different positions each week,” he said.

“We have to take the good with the bad; on the weekend the kids came up against a quality side and learnt where we need to be at.”

Arch rivals Heyfield and Churchill always provide the crowd with value for money, and their second show down of the season is set to be no different. Sitting outside the top five, the Cougars put their season back on track with a victory against the Tigers.

Churchill’s resolve will again be tested against potential finalists, the Kangaroos, that have been one of the big improvers of 2012.

Victory is imperative if the Cougars are to sneak into the top five, and Heyfield’s credentials as a premiership contender will be put under the microscope in this match.

They can take confidence in the fact they are one of only two sides to beat Heyfield since round four.

Facing a rebounding Bomber line-up is a daunting prospect for Gormandale.

Sharing fourth position with the Magpies, TTU must claim the four points to ensure it maintains its hold on the top five.

Sitting at the pointy end of the table for the most of the season, the Bombers’ recent results have seen its chances of playing finals football significantly reduced.

With one of the toughest draws in the final weeks of the home and away season, the Bombers can ill afford to let this match get away from them.

With nothing to lose and plenty to gain, expect the Tigers to provide spirited opposition.

Cowwarr will look to rebound from last week’s loss and keep its finals hopes alive when it meets Sale City.

Highlighting the differences between the league’s top and bottom sides, City managed a 201-point win over Woodside despite missing key players. The side unleashed some new stars to the ranks who stepped up without fault, a frightening prospect for opposition clubs.

The current crop of Rosedale premiership hopefuls will look to impress premiership players of the past when the club hosts the sides’ 1962 reunion.

Leading the competition, many have tipped the Blues to win the flag this year.

The only team to topple the Blues this season, Glengarry, will again be confident of its chances following the side’s gutsy 48-point victory over Cowwarr, which all but guarantees a top five finish come season end.

With a finals berth close to being locked away, the Magpies will focus their attention on halting the Blues winning streak of eight games.

Claiming victory in round four with a five-point thriller, the result was even more impressive given the Magpies where missing key players including Robbie Cahill, Josh King and Aaron Winkler who was a casualty during the game.

With the trio playing a major role in the side’s results in past weeks, the Blues may meet their match.

However, the Magpies can ill afford to be complacent; the Blues have proven to be the thorn in Glengarry’s side.