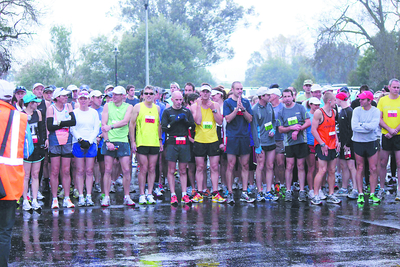 Running technique is one of the most neglected areas of sport, at elite and local levels, according to Denis Huffer.

The Newry-based running coach, who has taken four runners to international level, said running technique is “simply something people don’t think about” but was very important in injury prevention.

“Having a bad technique is like driving a new car with flat tyres, no wheel alignment and trying to get maximum performance out of it,” he said.

“What you’re aiming for with running is minimum effort for maximum return in the most relaxed state possible.”

Huffer said he spent “weeks and weeks” on technique with new students, as many people developed bad habits often from playing other sports such as Australian rules football, which Huffer played himself.

“People who’ve played football often run very low to the ground because you’re always running in protective mode to some degree,” he said.

“So they tend to run with their hips very low to the ground.”

He said overall Hawthorn had the best coaching in that area.

“Crawford never ran on in protective mode and he was one of the best runners around the backline,” Huffer said.

“Matthew Lloyd was another one who was quite high in the hips; it’s possible to run well playing ball sports if they learn from a young age, but many of them tense up far too much.”

Huffer said another important issue for runners of all abilities was choosing appropriate footware.

“I encourage most people to have a lighter shoe rather than a heavy cushioned one, because it allows you to heel strike (in the cushioned shoe) which is not good at all,” he said.

“Back when I was a kid there was a lot of running done barefoot where you can’t heel strike, but the world’s a different place now and I can’t get kids running in bare feet because there’s too much stuff on the ground.”

Huffer also pointed out there were people who needed more padding in a shoe.

“Every foot is different, and there are some injuries like plantar fasciitis and osgood schlatter’s disease that require more padding and orthotics usually require more support as well, so it’s different for each person,” he said.

According to Huffer, anyone can learn to improve their running technique and being a daily runner at 56 years of age, he believed “no one is ever too old”.