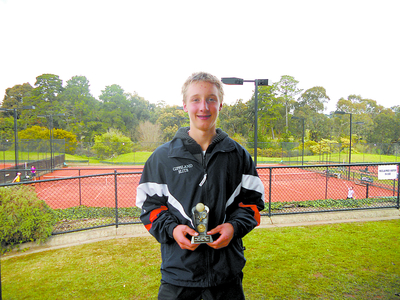 TENNIS takes up most of David Hough’s spare time, but the hard work has paid off.

The 14 year-old from Traralgon recently won the under 14 singles and doubles titles in two Australian ranking tournaments.

“I was really excited to win, and North Ringwood was great because I won the doubles with Josh Charlton who also plays with me at Traralgon,” he said.

The Lavalla College student, who plays about 15 hours of tennis per week, said he did not do anything “special” to prepare for the tournaments, except practice on clay courts.

“The squad in Notting Hill is great because the standard is really high and I can always see myself improving,” he said.

“This is my first year playing pennant at Kooyong, and I really like it because a lot of my friends also play which makes it enjoyable.”

For a teenager, spending so much time on a sport takes a lot of discipline.

“But I don’t mind, because it’s one of the only things I like doing this much,” he said.

His passion for the game started early, after watching his grandmother play in a local competition.

“I was watching her and I became really interested in it and dad organised for me to do lessons,” he said.

When asked about his playing style, David said he preferred being at the net which is why he “loved” doubles so much.

As an all-court player, he admired Roger Federer.

“He’s a really good role model because of his attitude and what he does on court,” David said.

“He’s also great at the net, which is where I prefer to be too.”

In the future David hopes to embark upon a professional tennis career, but said if that did not happen he would like to be considered for a college scholarship in the United States.