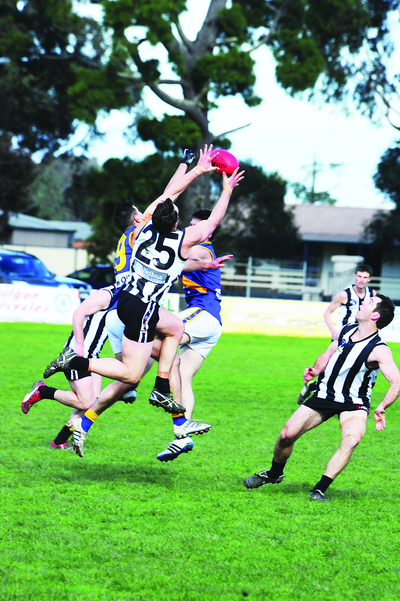 DESPITE drawing level with Glengarry at the 19-minute mark of the third quarter, Churchill was unable to overcome its North Gippsland football opponents, eventually losing by 35 points.

The Cougars were looking at claiming the another big scalp in as many weeks, but the Magpies were ready for the challenge.

Glengarry trailed by a straight kick at the final change of ends and clicked into overdrive in the fourth term, slamming home eight goals to three to kill any chance of a Churchill victory.

The Magpies’ challenge was led by best on ground Josh King with a haul of eight majors, which sees him jump to top of the league’s goal kicking ladder.

Glengarry’s Aaron Winkler played well around the ground and stepped in to fill the void when Trevor May left the field injured.

With Cougars coach Tim Darby coaching from the side lines it was up to Churchill’s Brandon Mahoney to lead from the front, and the midfielder’s work ethic was superb.

Cowwarr became only the third side this season to topple the ladder leaders, booting eight goals to two in the opening half.

Cowwarr’s Brad McBride led the charge in front of goals with Pat Tanish making his mark early in the midfield.

The Blues’ engine room struggled to make an impact, with their usual power forwards well held by a tough backline led by Scott Anderson.

Rosedale matched the Saints in the second half on the scoreboard but could do little to eat into the home side’s match winning lead.

TTU’s Brian Graham was instrumental in his side’s 33-point victory over Boisdale/Briagolong.

Graham booted four majors and led from the front as his side dominated the contest early.

The match appeared all but over by half-time; however, a late quarter challenge by Boisdale/Briagolong provided TTU with a scare.

Taking a 70-point lead into the final change, TTU appeared poised to rebound from last week’s disappointing result with a solid victory, but as they have done on several occasions this season the Bombers where left wanting in the final term.

Held goalless for the final 30 minutes of the contest TTU had no answers as Boisdale/Briagolong put together one of its best quarters of the year to boot 6.3 (39) to 0.2 (2).

HEYFIELD has again triumphed in the battle of the heavyweights, claiming victory for the second time this season against two-time reigning premiers Sale City with a 16-point victory.

Six points separated the sides in the opening 30 minutes of play; the home side extending the margin out to two goals at the half-time siren.

The sides went goal for goal in the premiership term, with the Kangaroos reeling the margin back to three points.

The Kangaroos flexed their muscles in the final term holding the Dogs goalless to record their 12th win of the season.

Jake Schuback led from the front for the Dogs while Tim Hicks was the pick of the goal kickers finishing the match with three.

Struggling teams Woodside and Gormandale fought hard for the points, with the Wildcats triumphant 12.9 (81) to 9.18 (72).

“It was a tough game; it could have gone either way, but in the end we are happy with the result,” Woodside coach Luke Anedda said.

“At half-time when we lost Josh Griffin, I thought that it was going to be tough to get over the line but we fought it out to the end, which was a great performance by the boys.”

After losing play maker Griffin, it was Brendan Birch who stood tall in the defining third term.

His work rate ensured the Wildcats did not feel the full effect of Griffin’s absence.

Gormandale’s Wayne Henry had the opportunity after the three-quarter siren to put the Tigers back in front; however, his shot registered a behind to level scores at the final change.