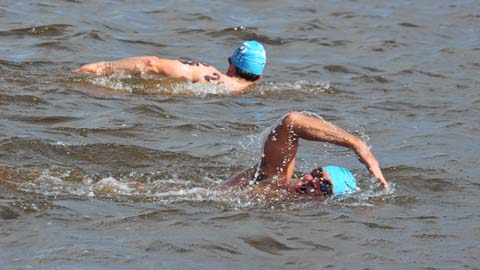 Tumultuous weather did little to stop Mark Allen and Brian Ford’s fundraising crusade on Saturday at the first day of the Victorian Open Water Championships, held at Hazelwood Pondage.

The Traralgon Swimming Club duo finished the 10-kilometre event simultaneously, six minutes inside the cut off time of three hours and 30 minutes, and in the process raised more than $10,000 for the Beau Vernon Fund.

With just a handful of entries in the open category, Allen and Ford finished equal third in the division in their first attempt at the distance, while Surrey Park’s Sam Warrick won overall.

“That was a bit of a novelty at the end for us (getting bronze); that was just awesome,” Traralgon Swimming Club coach Ford said.

“We got through it but it was pretty challenging; if I wasn’t doing it for money (for Beau Vernon) I would have been questioning whether I would have done it, it was a long way.

“It was sunny then it was windy, then there was rain and it was choppy; they were small things compared to what we were raising money for but it was a great experience.”

The 22nd annual Hazelwood Open Water Swim included the state championship 10km and 5km events plus the shorter distance 2.5km and 1km races, with more than 400 swimmers competing over the course of the weekend.

One-hundred-and-twenty-nine competitors took to the water in improved conditions on Sunday for the 5km event, which was also won by Warrick with Blunt again in third.

Event organiser and Traralgon Swimming Club president Jane Mitchell said the Hazelwood race had become something of an introduction to open water swimming for younger athletes in the past decade, since it was opened to athletes outside of masters.

“It gives them the opportunity (to try open water swimming) and for some swimmers this is going to be what they really like,” Mitchell said.

“Distance swimmers certainly are going to like it anyway but there are no turns and no black lines so it can be quite different and quite confronting for some swimmers because they are used to following the black line and clean clear water.

“It’s not as saturated as pool swimming so there are more opportunities if you’re good at it and you like it.”

Sixty-four swimmers attended a clinic held by Australian open water coach Greg Towele on Saturday morning, which addressed some of the key skills in the discipline.

The event acts as a qualifier for the national competition and is one of the first open water races of the season.

Other notable performers were Ben Geard (Traralgon) who won his age division in the new 2.5km event, Ellodie Reid (Traralgon) with silver in the 10 to 12 years 1km and Taylah DaRos, who finished third in the 13 to 15 years 1km race.