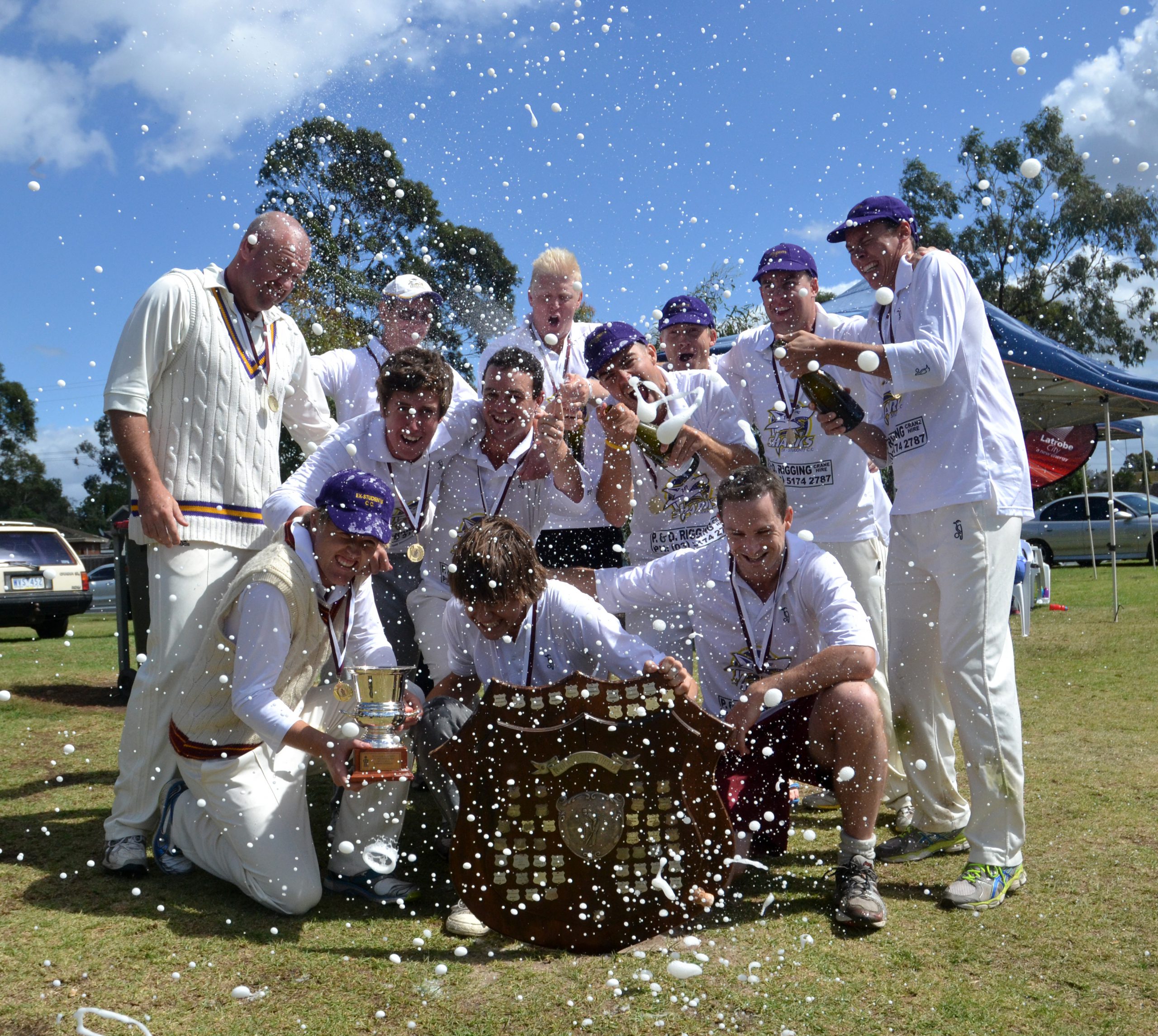 EX Students claimed a rare treble with wins across the grades on grand final weekend in Traralgon and district cricket.

Competition best and fairest Lee Stockdale hit the winning runs to guide his team to its first A grade premiership in 13 years after the Sharks mauled the Gormandale Tigers in a one-sided final.

“That was pretty nice (to score the final runs); I didn’t care who got them or if I made a duck as long as we won but to hit them I suppose it’s like a little fairytale,” Stockdale said.

“We planned really well for this game, we were up against a really good opposition and we played really well; I really believe we deserved to win this one.”

GORMANDALE won the toss on Saturday and had no hesitation in batting first on a hard Stoddart Park pitch.

The Sharks started off well despite a light drizzle, with Rob Voss and Barney Webber bowling a good line.

With the score on eight Kade Joske was first to go when caught in slips for three off Webber.

Disaster struck for the Tigers when Webber dismissed the reliable Kent Hammond for one.

Things were bad at 2/10 but when Gormandale captain Adrian Burgiel came and went for one to leave them at 3/13, the Tigers hit rock bottom.

Grantley Switzer departed for seven and the Tigers were down and out at 4/13.

Travis Switzer and Rob Darby put on 42 to stop the rot, but on the stroke of lunch Darby was removed for seven.

Shaun Barbour joined Switzer and they tried valiantly to build a partnership, but 24 runs later Switzer was out bowled by Andy Mathews for 47.

Barbour gutsed it out for 26, but the Tigers were outplayed and collapsed to be all out for 109.

The Sharks bowlers stuck to their plan and were sensational in their execution.

The Webber and James Pryde opening combination yielded 38 before the latter was out for 12.

When rain stopped play on Saturday Ex Students had amassed 1/55 to pass the halfway mark and looked to be cruising.

Webber and Jordy Gilmour resumed their partnership on Sunday morning in search of the 55 runs needed for victory.

Webber was removed for 36, but his innings had all but secured a memorable win.

Sharks’ captain Stockdale strode to the crease and steered his side to the title with 33 not out.

The skipper nearly closed proceedings with a six over deep backward square, but had to settle for a match-winning single as the ball landed inches short of the boundary.

Despite the magnitude of the rout, Stockdale said the satisfaction of the early blowout was nothing compared to the elation of holding up the cup.

“I don’t think it matters how much you win it by, I think (it’s about) the way we planned and the hunger in the group to want to succeed,” he said.

“It’s been a long time and we’ve got some blokes who have been here for eight or 10 years and probably played in one final, so to get here, win it and win it well is really rewarding.”

Webber capped off a great season by being named the Laurie Blake medallist for man of the match.

CENTRALS batted first and only managed 122.

Dave Kyle (27), Zac Gray (19), Ben Doble (29) and Brenton Ould (17) were the only players to reach double figures as Centrals collapsed in the face of a brilliant Ex Students bowling effort.

Sam Farmer (4/40) was the pick of the attack while Adam Jaensch and Nick O’Brien (3/1) were also outstanding.

Ex Students were 3/30 overnight after losing Paul Richards for a duck and Jackson McMahon and Jackson Beani for 10 each.

The Sharks regrouped on Sunday through Daniel Churchill (34*), Dean Forrest (20) and Adam Jaensch (42) who led their team to a comfortable victory.

Adam Jaensch was named man of the match.

Another sterling bowling effort from the Sharks restricted the West to a meagre 87 with Dylan Smith (20) the best of the batsman.

McGregor (3/21) and Andrew Bentley (3/28) did the bulk of the damage for the Sharks, and McGregor was named man of the match.