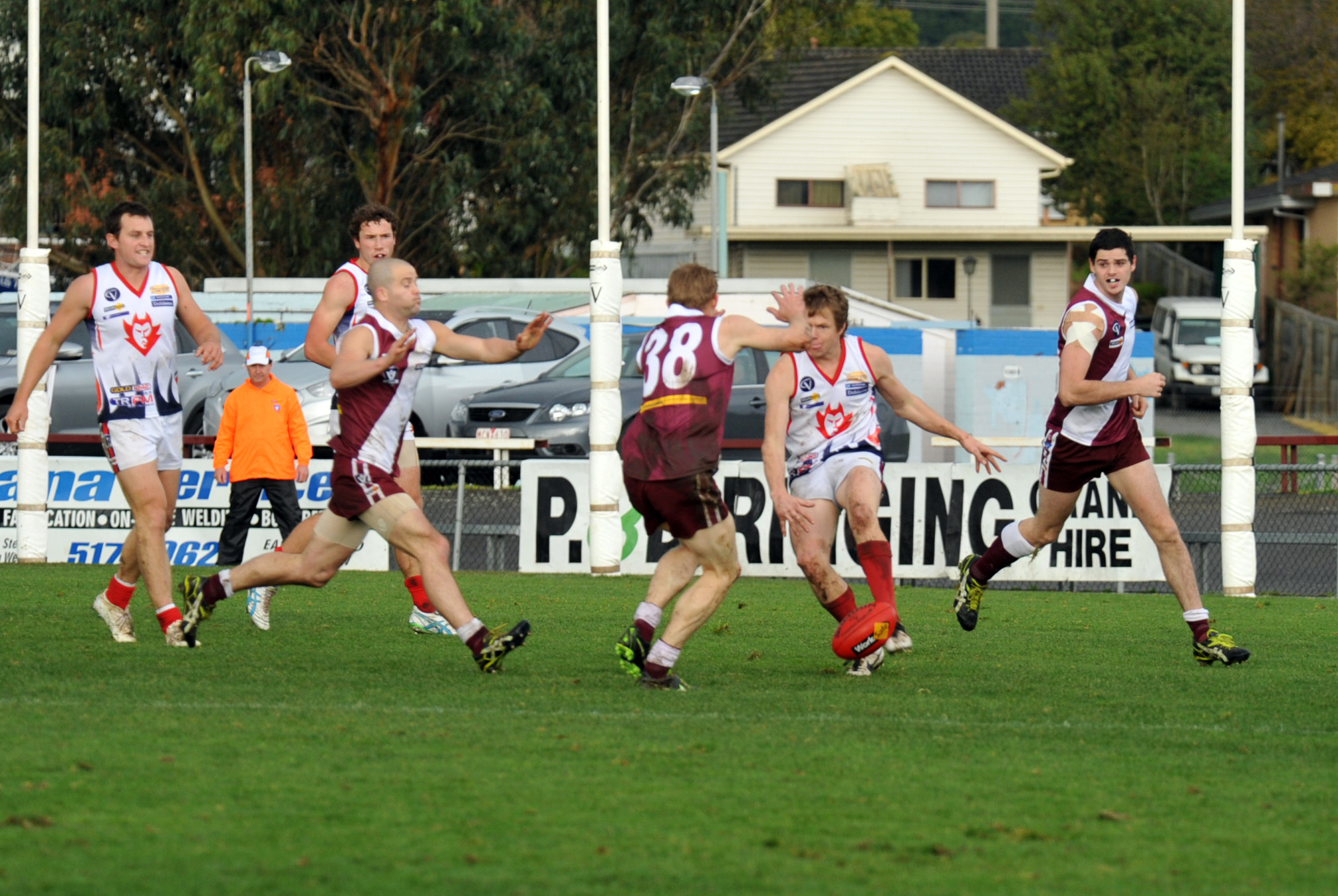 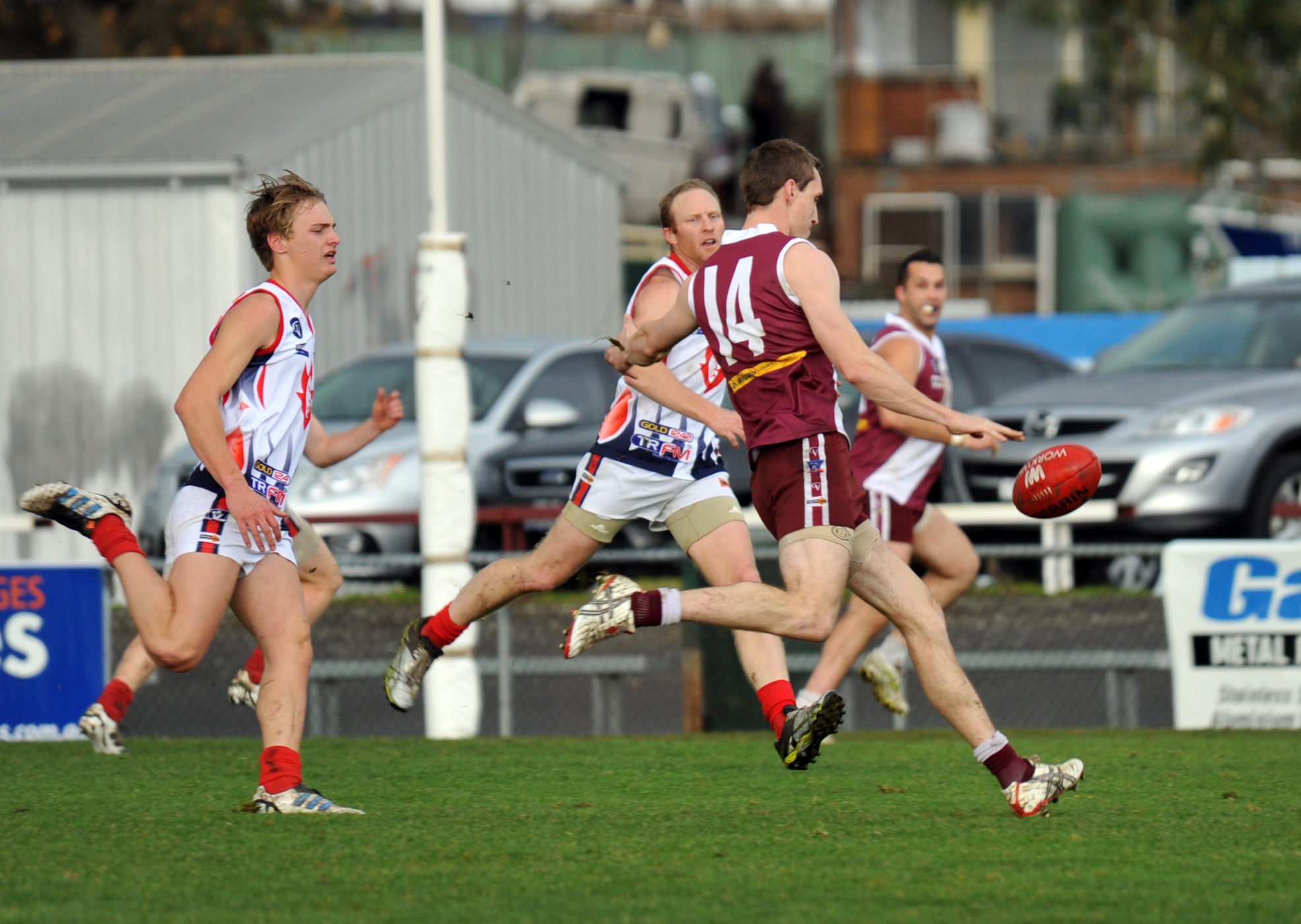 TRARALGON moved into third on the Gippsland League ladder after a big win at home over Bairnsdale.

Ruthless was the theme of the day in the Maroons’ camp and the side was exactly that on the park.

“We felt that Bairnsdale was going to come down here and treat it as a final and we did exactly the same knowing what bearing the result would have on where we sit in the five,” Traralgon coach Paul McCulloch said.

Having won its past four straight matches, and five of its last six, McCulloch said it was important to keep winning at this point of the season.

“We set ourselves to be a top three side. Effectively we are only in third until we play Maffra and that is going to be a really important game because it will give us the chance to lock ourselves in there,” he said.

Traralgon got off to a good start in a game marred by wet, wintry and muddy conditions.

The Maroons kicked four goals 10 in the opening term to lead Bairnsdale by 28 points at the first change.

The home team extended its hold on the match slightly after a more closely contested second term, however, by three-quarter-time its lead was out to 47 points.

“Obviously we are in a really good position but I don’t want to be satisfied with that,” McCulloch said during his three-quarter-time address.

Traralgon added three goals to Bairnsdale’s two in the last, in what proved to be a disappointing day out for the visitor.

Jackson Hall was the stand out performer for Traralgon with five goals.

The Maroons will now enjoy a week’s rest due to the split round.

“We have got a couple of blokes in that over 28 bracket that really need to freshen up, however I think freshening up mentally as well as physically is what they need,” McCulloch said.

Bairnsdale, which remains in sixth just a game outside the five behind Wonthaggi, will face another tough opponent when it hosts Sale on Sunday.

MORWELL returned to form after last week’s shock loss to Bairnsdale, fighting off a late comeback to beat Maffra in difficult conditions at Morwell Recreation Reserve.

The home team had the majority of scoring opportunities in an opening term which saw it kick four goals six to lead Maffra by 21 points at the first change.

Like all of Saturday’s Gippsland League matches it was the first quarter tally that proved the difference at the end of the day.

Both Morwell and Maffra went without a major in the second quarter and the margin was 24 points at half-time.

The Tigers retained the upper hand in the third with three goals while the Eagles managed only two despite a spate of scoring chances; the visitor added five behinds in a dominant but inaccurate third quarter effort.

Maffra carried its momentum into the last quarter.

After scoring a club record 251 to beat Drouin last week, Maffra managed a total of just 50 points against the resolute Tigers.

Mannon Johnson and Tom Phillips each kicked three for the Tigers while Ryan Foat and Adrian Burgiel kicked two apiece for the Eagles.

WONTHAGGI’S late season slump continued as the Power registered a fourth straight loss, this time at the hands of Warragul in a low scoring encounter.

The Gulls’ fifth win of the year came as a surprise to many.

After concerns about inaccuracy in recent weeks, Wonthaggi silenced its critics when it kicked four goals straight in the first term to lead Warragul by 11 points at the first change.

That would be the end of the highlight reel for the Power, which struggled in testing conditions for the remainder of the day.

The home team managed to add just six behinds to its tally during the remaining three quarters.

Its opponent too was kept goalless in the second but went on to boot two in the third and a fifth major in the last to run out a narrow four-point winner.

The loss saw Wonthaggi slump to fifth on the ladder, one game clear of Bairnsdale.

IT was another tough day out for Moe in the battle between first and last.

The Magpies made short work of the Lions in a percentage boosting 157-point win.

The visitor burst out of the blocks with an 11 goal-to-one opening term and led Moe by 10 goals at the first change.

The ladder leader piled on four majors in the second, and six in the third, before finishing the Lions off with an eight goal last term.

LEONGATHA made it three wins in a row for the first time this year when it defeated Drouin.

Five goals from Cade Maskell and three from Nicholas Nagel helped the Parrots to a morale boosting 54-point win.

The visitor dominated the opening term with four unanswered goals and led by 24 points at the first change.

Leongatha took its foot off the pedal in a more closely contested second quarter, before finishing the match off with a six- goal second half.