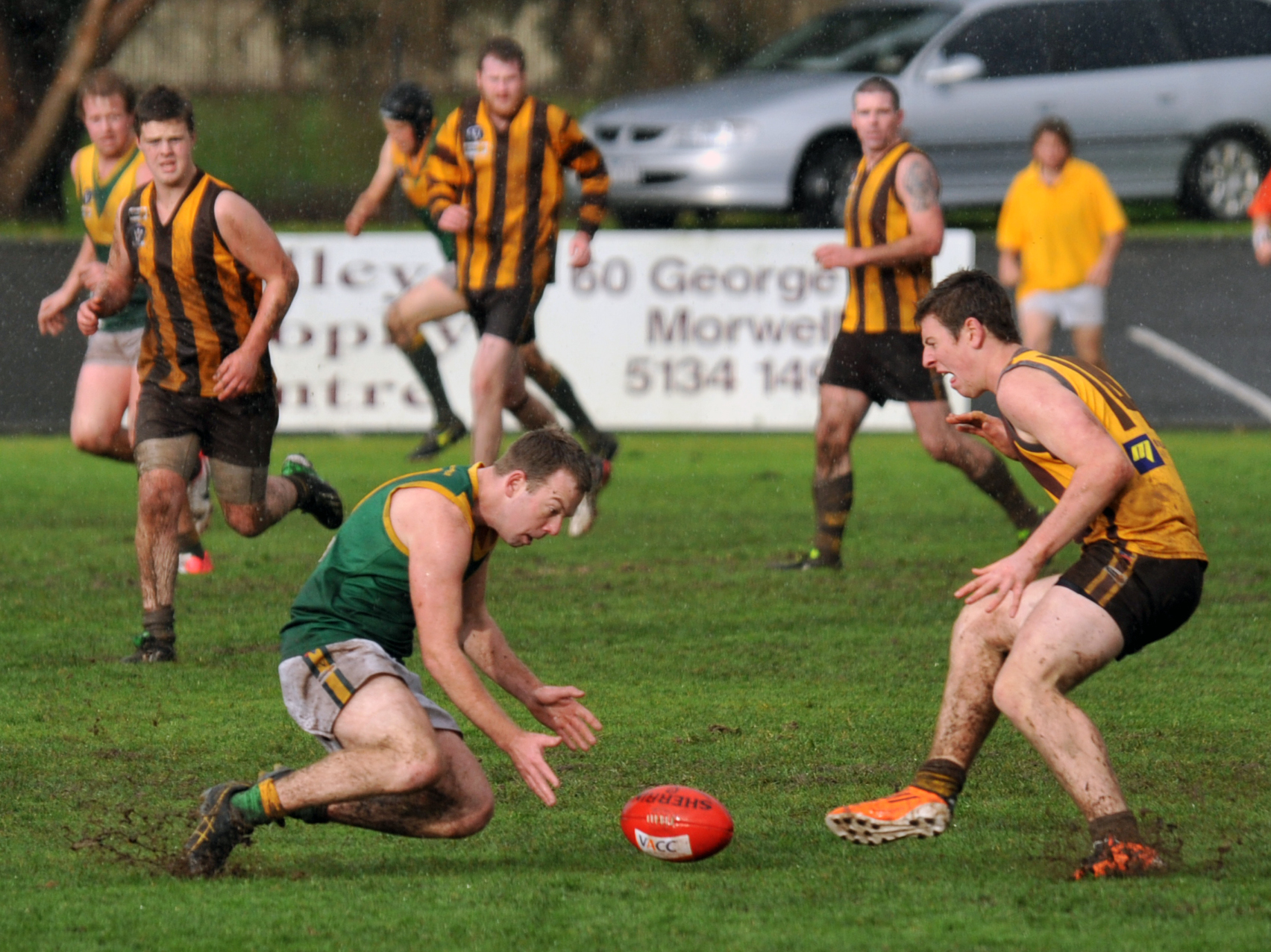 MISERABLE weather contributed to low scorelines in Saturday’s Mid Gippsland football round of matches as fifth-placed Boolarra brought Mirboo North down a peg with a 32-point win over the league leader.

It was a day out for the Demons, who created a few records on the way to an upset victory.

It was the first time since 1999 that the Dees had beaten Mirboo North at home and it was the lowest score kicked by Mirboo North since 1997 in the 100th meeting between the two clubs.

Mirboo North retained top spot on the ladder despite the loss, ahead of Newborough on percentage.

Boolarra kicked away in the first quarter, gaining a two-goal break, but it was tough in the wet and greasy conditions for either team to gain any telling breaks.

In conditions suited to the smaller brigade it was Boolarra’s talls in Scott Boddy and Mark Van Dyke who starred in the slogfest.

Both teams scored a goal each in the second as conditions worsened and by half-time it was still a two-goal gap.

Boolarra applied the pressure in the second half and restricted Mirboo North to just three behinds, while it attacked the sticks to add two goals, eight to run out 32-point winners in the surprise of the season.

The win virtually gives Boolarra fifth spot on the ladder and a chance for a playoff in the finals.

TRAFALGAR enjoyed a 39-point win over Yallourn-Yallourn North, restricting the Bombers to a mere behind for the game, but dropped to fourth on the ladder to Yinnar by 0.5 per cent.

Records were also broken in this match. The aggregate total was the lowest between the two clubs in 83 matches played.

It was also YYN’s lowest ever score against Trafalgar, relegating their 0.3 in 2009 to second on the list.

The only thing YYN won on the day was the toss and was the first team to score (its only point for the day).

Trafalgar slogged its way to an important win but it was not pretty football.

Early goals to Michael Farrell kept the advantage in Trafalgar’s favour as it ran out winners by 39 points.

YINNAR gave itself a two per cent boost to gain third position when it defeated Thorpdale by 63 points.

Yinnar set the victory up in the first quarter before the weather turned for the worse.

The Magpies had the edge with their smaller players creating havoc around the packs.

At times it looked like a rugby match as scrums developed in the muddy conditions. Kane Grinstead-Jones with four goals was the leading scorer on the day; his individual tally bettered Thorpdale’s combined score.

HILL End won its fourth successive game, but its run to the finals is in jeopardy. Boolarra is now eight points ahead and, with three hard matches to play, it will be hard going for the Hillmen to make the five.

It was tough work against Morwell East as the Hillmen had to come from behind. Trailing at quarter-time by 21 points, Hill End levelled by half-time and skipped away after the break adding four goals, 10.

Morwell East was limited to three behinds for the half and, in a strong defensive last quarter by Hill End, failed to get within its forward 50 as Hill End ran out winners by 31 points.

It was Hill End’s first win at Morwell East since 2007.

For the second week in a row Karl Mutke was the top scorer for Hill End.

IN a rare event for local football Newborough and Yarragon played out a scoreless first quarter.

Newborough finally put points on in the second, but added just one goal, six.

Conditions were poor at Yarragon with players continually losing their grip on the greasy ball and at times it was difficult to tell the players apart due to a heavy coating of mud.

After a half-time clean-up Newborough came out fighting in the third. Jarrod Bennetts got his radar going to score three goals as the Bulldogs ran away with a 78-point win.

Inaccuracy could have cost Newborough top position as it now trails Mirboo North by 37.64 per cent.

TRAFALGAR will celebrate its 125th anniversary this weekend when it plays rival Yarragon for the Waterloo Trophy.

The club will also release the book “Victory in Our Blood” by Paul Taylor, who has spent many years working on the project.

The 400-page book will include 50 pages of historic club photos.

To coincide with the release of the book the club has arranged a reunion of the 1913 and 1923 senior premiership teams. The club is expecting players from the 2003 reserve and 1973 and 1983 fourths premiership teams to attend.