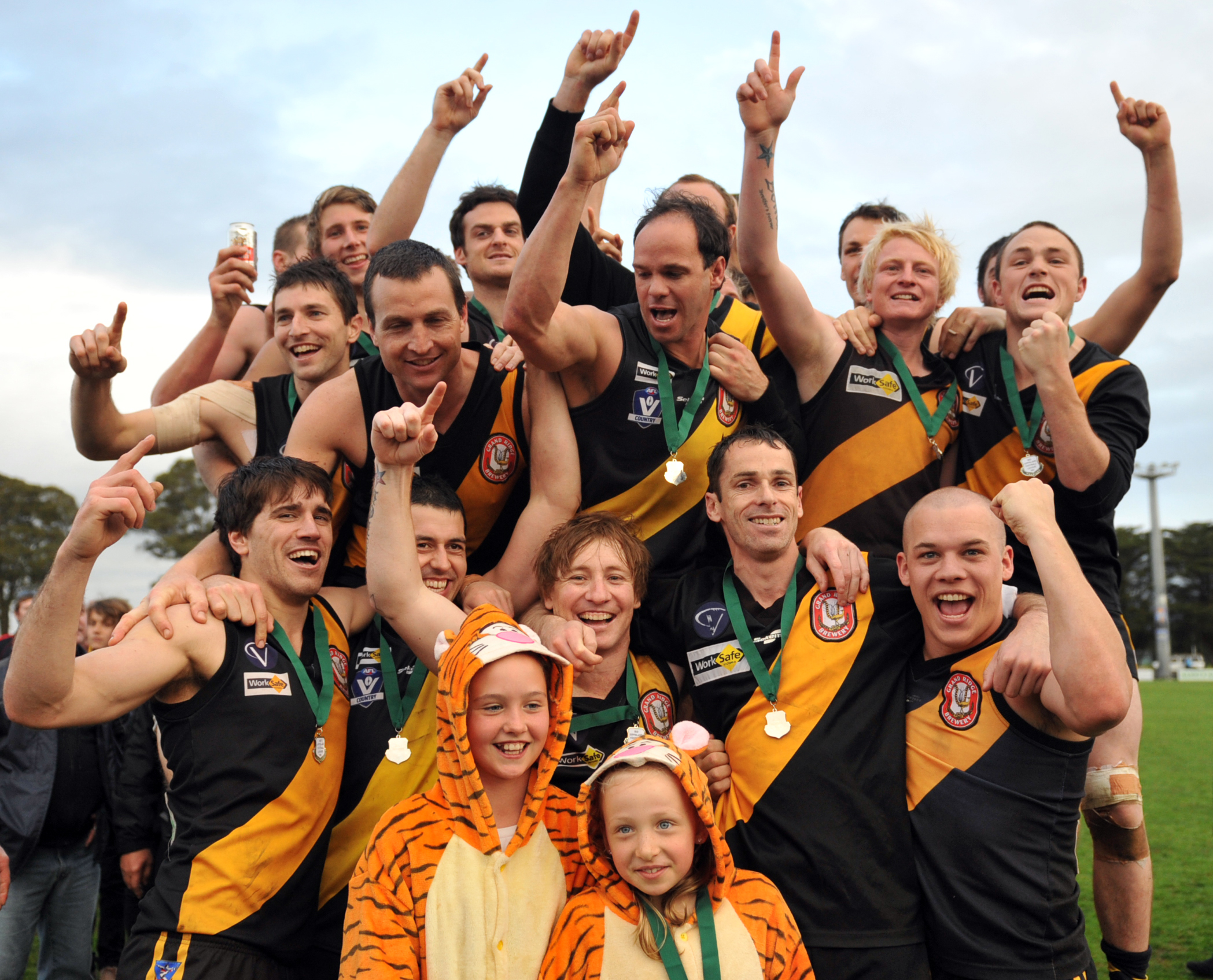 IT came down to the final kick of the Mid Gippsland football season for Mirboo North Tigers to be crowned 2013 premiers on Saturday at Morwell.

Newborough trailled by four points with seconds remaining when Luke Webber received a free kick from just on the forward 50 line.

Without hesitation he lined up a long-bomb to the goal-square, but as his boot hit the ball the siren sounded and the Sherrin fell short, dashing Newborough’s hopes of a grand final win.

Mirboo North fans erupted in cheers and the Tigers celebrated, while the Dogs were left devastated for the second consecutive year.

The wind that had tormented players during the fourths, thirds and reserves game died down and gave way to rain for the senior fixture, which fell for most of the match.

The Tigers led by three points at the three-quarter-time break and the premiership cup was within both sides’ reach.

In an arm-wrestle of a last quarter, the Tigers managed a behind before Webber booted a goal to put Newborough in front, 65-62.

Mirboo North had their opportunities, but could not find the target with Holland missing the lot and Tim Traill scoring a behind.

Young Tiger Kal Nash ran on to score a crucial goal with minutes remaining to send the Tigers to the front by four.

The Bulldogs delivered the ball to their forward line in the final throes, but when Webber’s kick ran out of legs, so too did the Dogs’ grand final dream.

Nash, after winning his first grand final off his own boot, said he was glad he was not forced to take a set-shot to kick the winner.

“(After the shot) I didn’t think it was won, ’cause I thought they were going to kick one in that last few seconds, but we got there. Pretty stoked. We’ll be celebrating all night,” Nash said.

The day was more special still for Nash as he shared the victory with brothers Jake, among the Tigers’ best players, and Liam, who lined up for Gippsland Power throughout most of the season.

Tiger coach Troy Hamilton said he felt relief more than anything when the final siren sounded.

“(After Nash’s goal) we knew there was still time. We just tried to throw everyone back, but we were just hanging on for dear life I suppose,” Hamilton said.

Hamilton said guts and determination got the boys through and the win was made possible by players stepping up in the final quarter.

“Our boys played fantastic. It didn’t all go our way, but we just kept going. There were too many players that didn’t want to give in, so that was the key I think,” he said.

Newborough’s Chris Weller was named best on ground in the post-match ceremony.

Bulldogs coach Allan Chandler said his side did everything they planned to do, except for win, adding unfortunate errors cost them the game.﻿

“I said to the boys after the game there was 100 different times when it could have gone our way and it didn’t. And you can blame yourself, but at the end of the day it’s not going to change the result. There’s no use blaming yourself,” Chandler said.

He said young players’ development and the whole side’s improvement were what they could take from the season.

Mirboo North scored first and got out to a three point lead at quarter-time, but the Magpies booted three goals while holding the Tigers scoreless in the second quarter to lead by 21 at half-time.

The Tigers came back in the third quarter, narrowing the margin to 15, but could not score in the last term.

The Blues seemed spooked by the Panthers’ fearsome abilities and did not play their best football.

The Panthers led at all breaks and held the Blues goalless in the last quarter.

From three scores each in the first quarter Yinnar had managed two goals one, while Yarragon had three behinds.

The Magpies held the Panthers goalless for three quarters to post a five goal win.