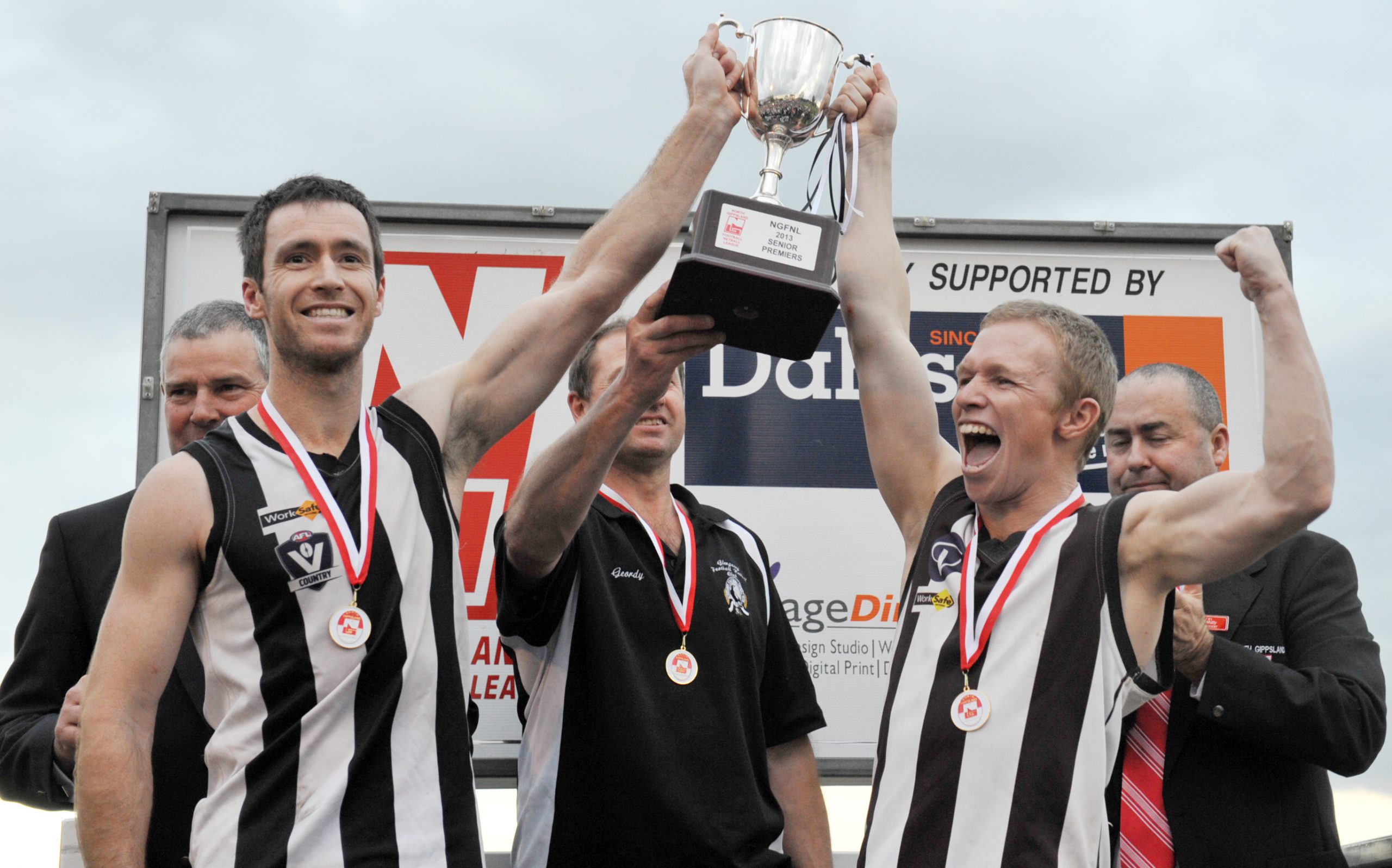 GLENGARRY broke a 17-year North Gippsland premiership drought in thrilling fashion before a record crowd of more than 4400 when the decider of the decade against Heyfield was forced into extra-time.

Kangaroo Cal Egan’s behind in the dying stages of regular time drew scores level at 14.13 (97) apiece, adding 20 minutes to the clock to determine a winner.

King, the premier centre half-forward of the competition, took all before him on the grand stage.

He booted a game-high seven majors, contributed to a number of others and, importantly, when the game was there for the taking, stood tall to goal and extended the Pies’ lead to 13 points.

Glengarry star forward was not alone in a true team effort.

The Magpies held on to win when the game was in the balance as the Kangaroos, led by coach Adrian Cox, threw the gauntlet down in a last ditch attempt to seal back-to-back flags only to fall short by a straight kick.

King kickstarted proceedings in the early going with a strong lead and mark, then split the sticks to open the scoring.

A shot on the run by Heyfield’s Josh Stubbes missed to the near side, however, defensive pressure by the Kangaroos forwards set Brett Szabo up for a goal before he left the field with an ankle injury.

Cox was the danger man of the quarter.

The class of the Roos’ coach shone through as he dodged the opposition to shoot for goal from 30 metres and lift his side 10 points clear.

King registered his second for the term, before Kodie Woodland got the quick reply to keep the momentum in Heyfield’s favour.

True to the opening term’s ebbs and flows, Connor Cook got the response to keep the Magpies in arm’s reach before Jesse Bedggood’s booming kick from 40 metres recorded the Roos’ fourth.

Glengarry started the second term on the front foot with the first score, before a quick reply by Heyfield’s Mitch Dowse restored the ledger.

It would be the last Heyfield goal in a quiet term which saw King and company turn it on in the opposing forward line.

Coach Ryan Potter’s major handed Glengarry the lead, and his side did not look back in a blistering 15 minutes of play which saw King add three and Winkler get in on the act as the Magpies built a 23-point buffer at the long change.

Heyfield lifted in the third, hitting the opponent, and the ball, hard as it worked to contain the run and drive of Gengarry’s Potter, Lochie Little and Brock Rawson.

Heyfield began to win a number of crucial contests around the ground as it inched closer on the scoreboard.

Manning up at the contest the Kangaroos held the ball tight to shut down Glengarry’s run and create their own.

Two quick majors by Dowse set the tone for Heyfield’s six-goal-to-one term, drawing the premier to within four at the final change.

A heart-stopping final term, which saw seven majors and some handy behinds scored, ultimately expired with a drawn scoreline at the final siren.

With extra-time on the clock and physical exhaustion setting in, the stage was set for a season defining 20 minutes of play.

His next shot missed but he achieved redemption moments later; he added another as the margin blew out to 14 points.

Tactics quickly changed for the Kangaroos.

Jesse Bedggood was thrown onto the ball, Cox lifted to another level, Kodie Woodland found the goals and the Dowse brothers Nic and Mitch attacked the ball with hard ferocious running.

Nic Dinsdale brought the margin back to a straight kick after several misses to Heyfield, and the Kangaroos went on the attack again through Dowse, however the siren rang on the side’s last ditch attempt.

FIVE goals from Heyfield’s best-on-ground Nathan Wellins helped the minor premiers to a 21-point win over Traralgon Tyers United in the reserves final.

Last year’s bridesmaids, the Kangaroos, were simply too strong in the final quarter.

TTU challenged on a number of occasions and came to life but could not match Heyfield, which booted away on the scoreboard.

COWWARR thirds claimed a first premiership title in as many attempts with a 16-point win over the competition’s number one ranked side, Churchill.

Bursting out of the blocks, the Saints slammed home five majors to start the contest before a further five in the second term handed the side a 14-point break at the main change.