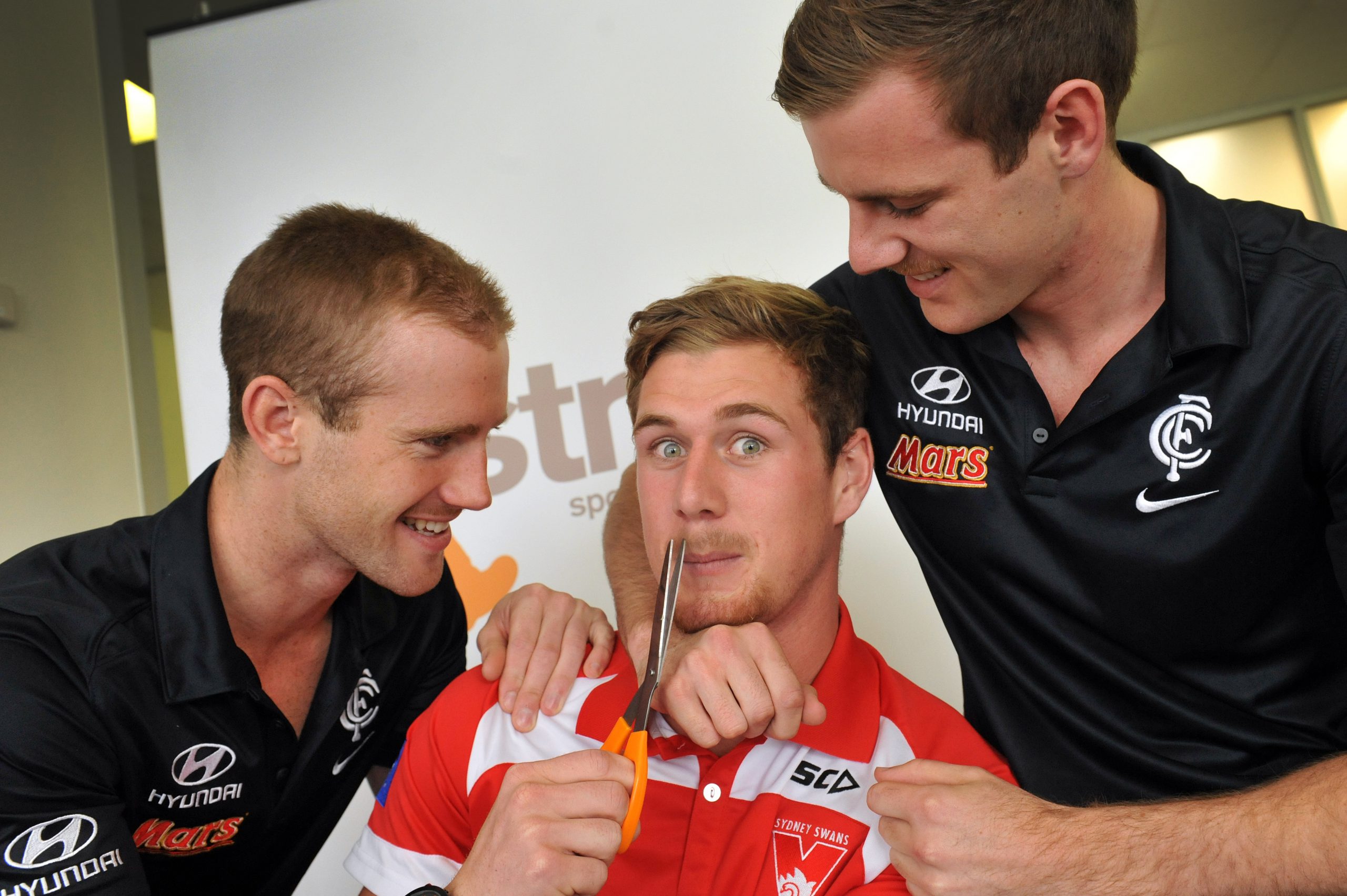 THEIR moustaches may be questionable but the cause former Gippsland Power stars Tim Membrey, Nick Graham and Sam Docherty are growing them for is anything but.

The trio, along with fellow Gippsland AFL graduates Jed Lamb and Tommy Bugg, have taken up the Movember challenge to help raise funds in the fight against prostate cancer under the Stride Sports Management banner.

Visiting Traralgon last Thursday to receive a donation of $500 from Ben Wilson at Property Central, the boys’ bristles were coming in with varied success.

First time mo-grower and Sydney Swan Membrey was halfway toward handlebars and, while struggling to make ends meet, had confidence of imminent acceleration.

“I’ve tried to go for a bit of a handlebar but it’s really struggling, I’m waiting for it to join up, once that joins up I reckon I’ll be up there,” Membrey said.

“First time I’ve had a crack at it, bit of a slow start but I think I’ll pull through very strong coming into the later month. “It’s all for a good cause… I was all for it to get behind it and try to raise some money.”

Bereft of his signature blonde do after Carlton’s end of season footy trip, 2012 Morrish Medallist Graham was seeking hair redemption with his facial styling, a classic pencil ‘stache.

“I’ve got the bald head and the mo running at the moment so not looking 100 per cent,” he said.

“The boys knew how much I loved my hair so they decided to pin me down on the footy trip and because I was the rookie they shaved it off; I went up to my room and had a bit of a cry for a while and now decided to get over it… hopefully by mid-February it’ll be back to where it started.”

New Blue Docherty, who was traded to Carlton from the Brisbane Lions last month, sported a red tinge to his uncomplicated upper lip arrangement, resembling an additional eyebrow.

“Usually I just have short stubble but I thought I’d shave it all away and try this dirty little thing,” he said.

“There’s a bit missing on the middle of my face so I thought I’d throw it on the top of the lip.” Carlton gave up pick 33 in this year’s draft in exchange for the defender who grew up barracking for the Blues.

After making his debut at Brisbane this year and playing 13 games, the 20 year-old said he was excited to join the same club as former Power teammate Graham.

“Stoked to get down, I was pretty happy getting to Carlton, there was a few clubs that I looked at but Carlton was by far the best,” he said.

“I played my top age year when he (Graham) was bottom age and we played a fair bit of footy then so it will be good to get back on the field together.”

The management company took up the initiative after one of its directors was diagnosed with prostate cancer.

“In a sports management company, especially AFL, men’s health is pretty important so we want to do everything we can to raise some money,” SSM spokesperson Matt Bain said.