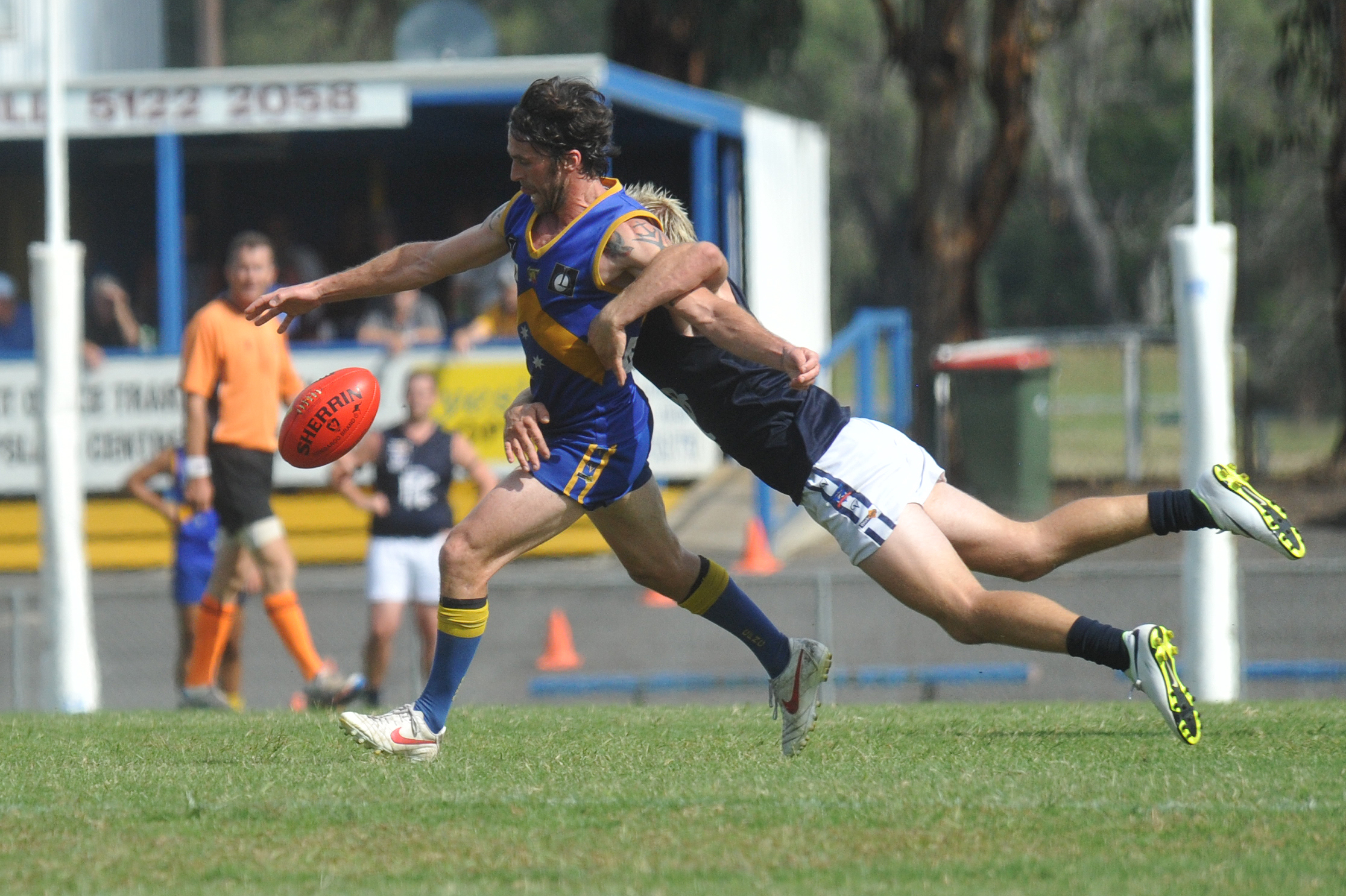 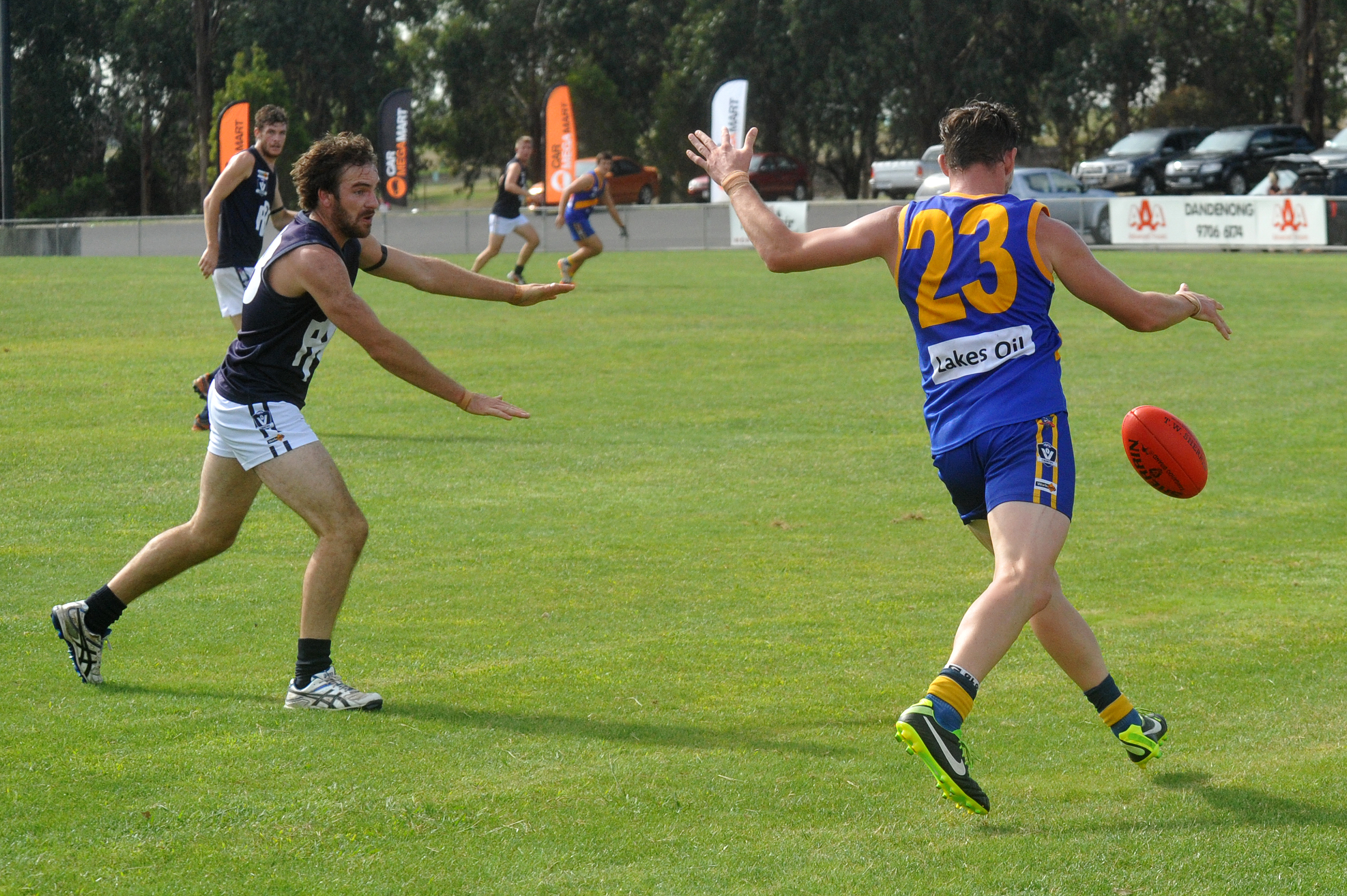 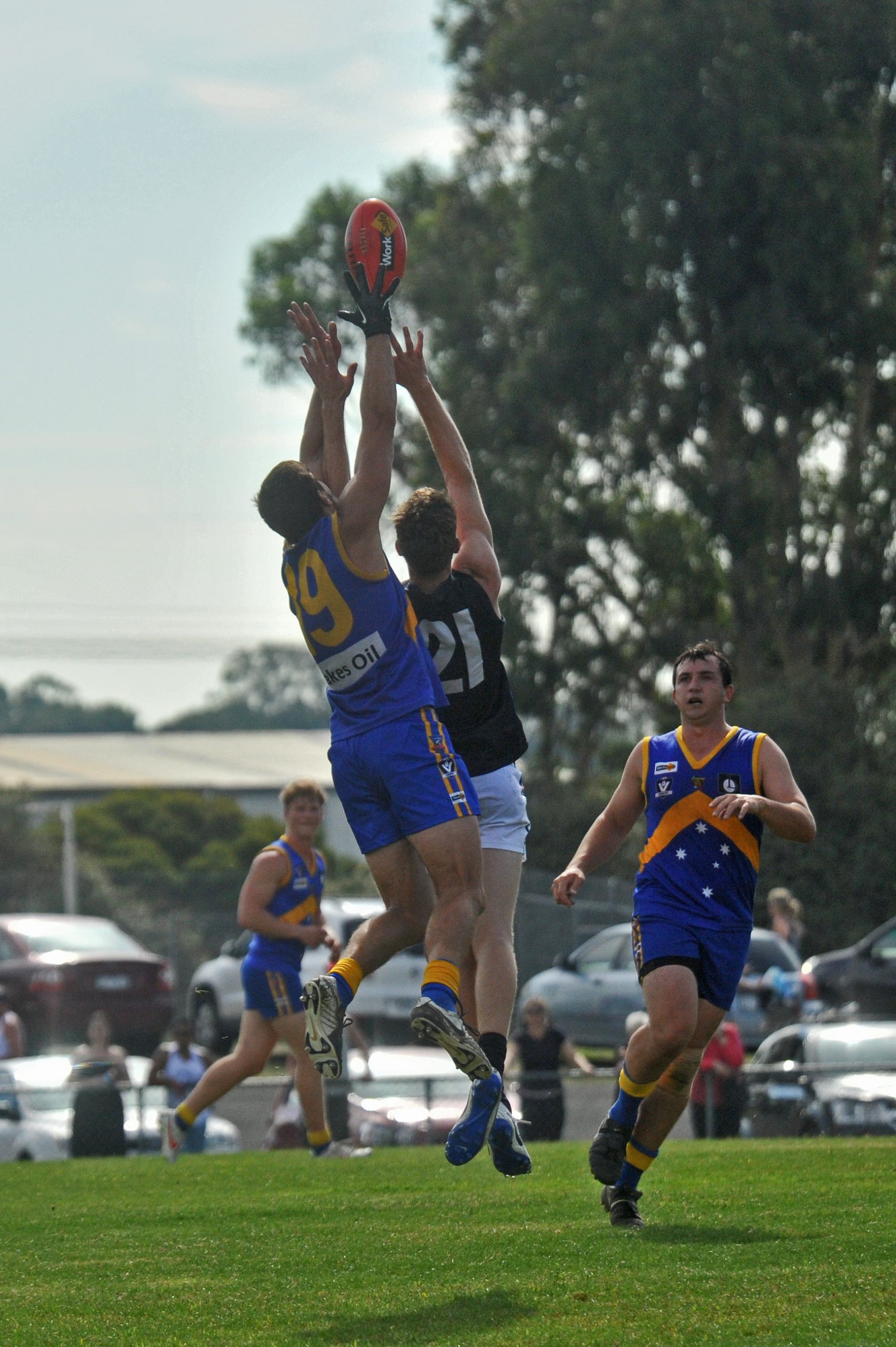 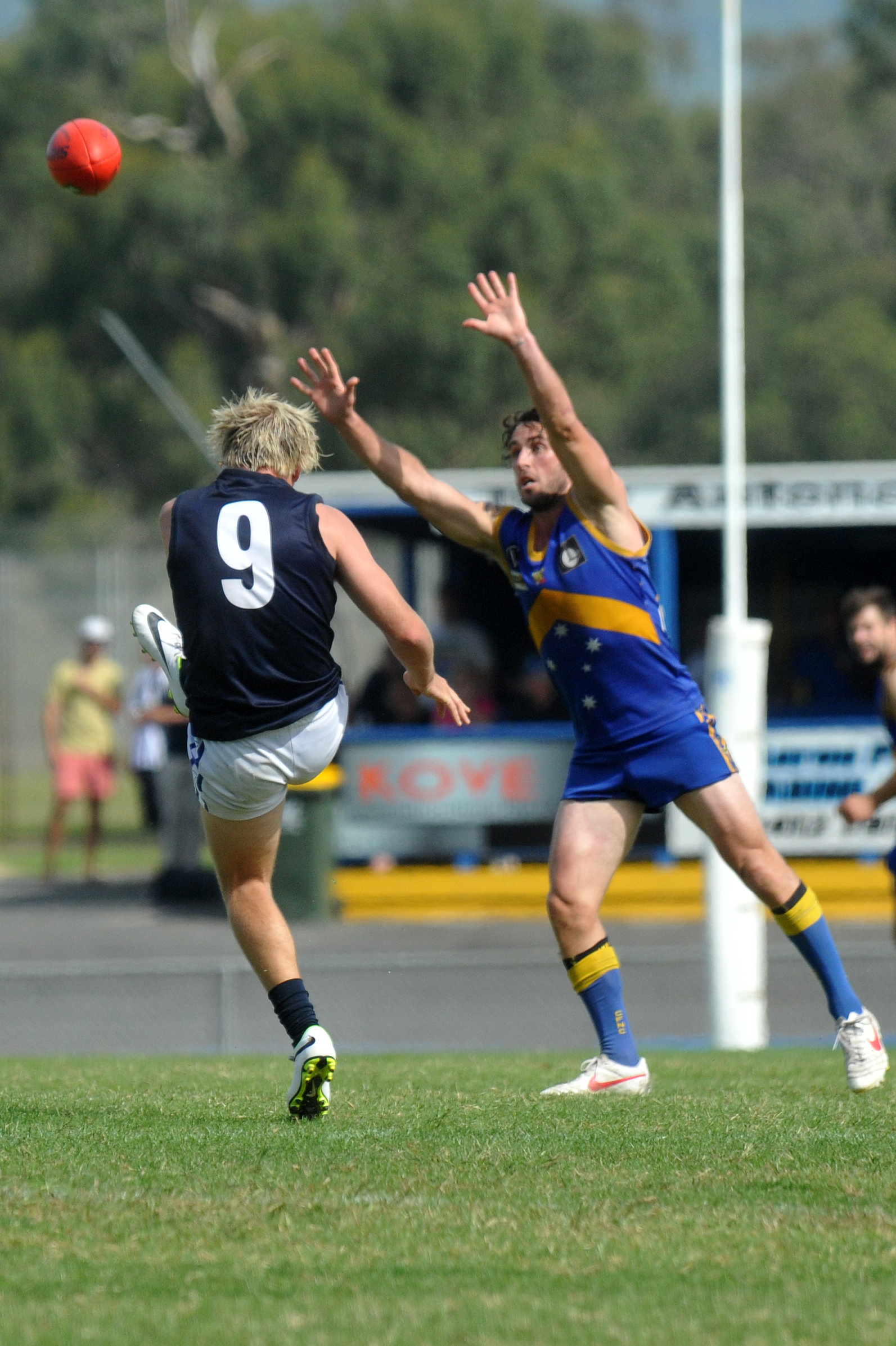 SATURDAY’S blockbuster grand final rematch between reigning premiers Glengarry and last season’s powerhouse Heyfield lived up to all expectations early, before the fitness of the Kangaroos came to the fore in the opening round of North Gippsland Football.

Glengarry club stalwart Don Duncan started the Magpies’ premiership celebration by unfurling the flag ahead of the big clash.

As it wafted over proceedings the home side marked its intentions early, slotting through the opening goal of the match with lightning speed in the first minute.

It was followed by a second unanswered major after a strong mark to Josh King saw him kick his first of five for the contest.

Play concentrated back and forth between the two half-backlines in a physical contest as Heyfield rued missed opportunities in front of goal, before clawing back two majors to trail by two behinds at the first change.

New recruit Lukas Jenkins proved a wildcard for the Kangaroos; the big man won the ruck contest against Aaron Winker, providing the fleet footed brigade of Jack Woodland, Nic Dinsdale, Dave Kelly and Nic Dowse with first use of the ball.

The third term was a more even affair on the scoreboard.

The Magpies, through Mark Engley and King, kept the scoreboard ticking over but could do little to eat into the deficit.

For the visitors Joel Dinsdale was a standout with three majors, Jack Woodland impressed with his pace and skill and Nic Dinsdale accounted for several opponents.

The Magpies’ key forwards in last year’s grand final, Engley and King, dominated the Kangaroos backline while defenders Truin and Rowson worked tirelessly to hold their opponents at bay.

New kids on the block Yarram sent a message to the competition with a dominating performance against Traralgon Tyers United.

Boasting 10 individual goal kickers the Demons exploded out of the blocks, slamming home six majors in a frantic opening term before registering a further five to leave the Bombers wanting at the long change, 11.6 (72) to 4.4 (28).

The unknown prospect has the competition on notice with coach Griffin Underwood and his brother Ryan leading from the front in an impressive performance.

With their backs up against the wall, adding a mere two behinds in the third term, the Bombers, led by new recruit Matt Gibb and captain Luke Middleton, lifted to turn the game on its head.

The visitor dominated the final term, leaving little in the tank as they slammed home eight goals to two to draw within 16 points at the siren, but the Demons clung on to a 15.8 (98) to 12.10 (82) victory.

Yarram’s Corbin Sutherland was the lead goal scorer for the home side, finishing the contest with three majors, while TTU’s Tyler Mustoe also booted three.

The new breed of Wildcats starred in Woodside’s win over Boisdale/Briagolong, but it was far from one way traffic in a contest of two contrasting halves.

The opening term belonged to the Wildcats.

The visitor started strong and the Bombers quickly found themselves trailing by 31 points at the first break.

Through Josh Tait and James Cook, three goals each, in attack, the Bombers turned the tables on Woodside by booting eight goals to one to hit the lead by two kicks.

After the long change Woodside, through Justin Staley, Tom Love and Shannon Winmar, caused havoc with a barrage of goals, piling on 10 majors for the second half to cruise home by 31 points.

Staley, Love and Winmar provided headaches for the Bombers’ defence with 10 majors between them in a stellar performance in front of goals, while Matt Scholz and Matt Griffin were solid contributors in a strong team effort.

Cook was a standout for Boisdale/Briagolong, new recruit Matt Lee made an impact in his first match in the red and black and Regan Tait also stood tall.

The match was evenly poised at half-time; both sides’ desperation at the ball was evident but the Blues took an 11-point lead at the break.

The visitor exploded out of the blocks in the third term and its solid quarter put the Cougars 38 points behind at the final change.

Rosedale’s momentum was not halted by the change and it added a further eight goals in a stellar final term.

Blues powerhouse forward Andrew Flanagan was the main figure in front of goals, setting the impetus for victory with an individual haul of eight majors, while Brandon McDonald chipped in with five of his own.

Brad Scott was a valuable contributor for the home side, ball magnet Dale Fleming worked tirelessly around the ground in his first game back at the club while the presence of pacey tall Gerard Barnes also benefited Rosedale.

For the home side Joey Whykes led from the front in a best on ground performance.

Despite trailing for the majority of the contest, a new look Gormandale proved a handful for Sale City.

With the signature still wet on Jake Schuback’s contract the Dogs unfurled another star recruit ahead of the contest against the Tigers.

Aiming to hand new coach Hayden Burgiel a first up win the Dogs found themselves in a tight contest as the Tigers hit the front in the first quarter.

It was the Tigers’ new recruits Josh Sandy, Luke McLean and David Schulberg who made their mark early as they challenged their highly fancied opponents.

The young pups found some bark in the second term to turn a four point deficit into a 14-point lead.

The Dogs did all they could to hold the visitors at bay, but as they had done at will throughout the contest the Tigers again came at the home side to reel the margin back to nine points at the end of the third term.