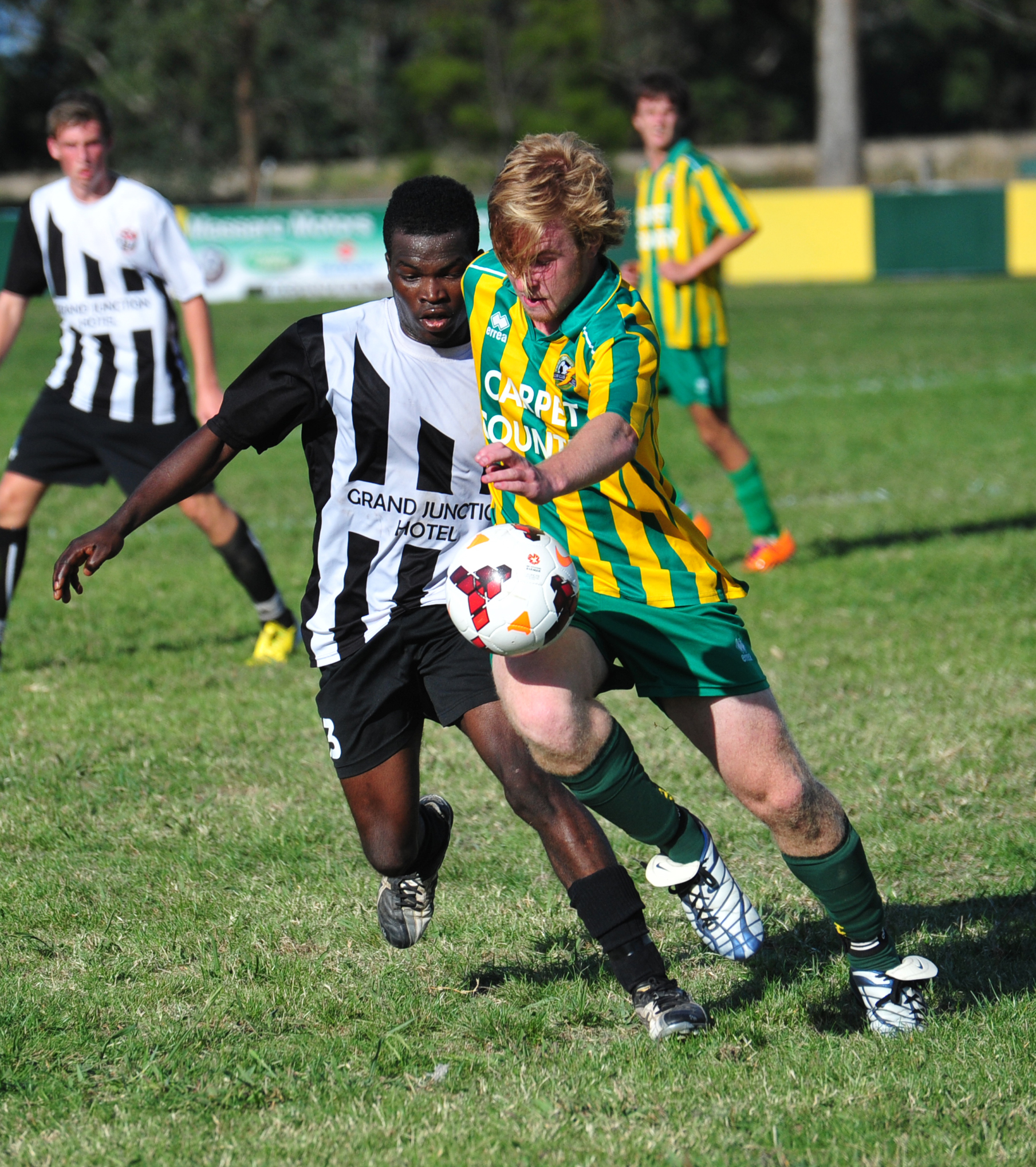 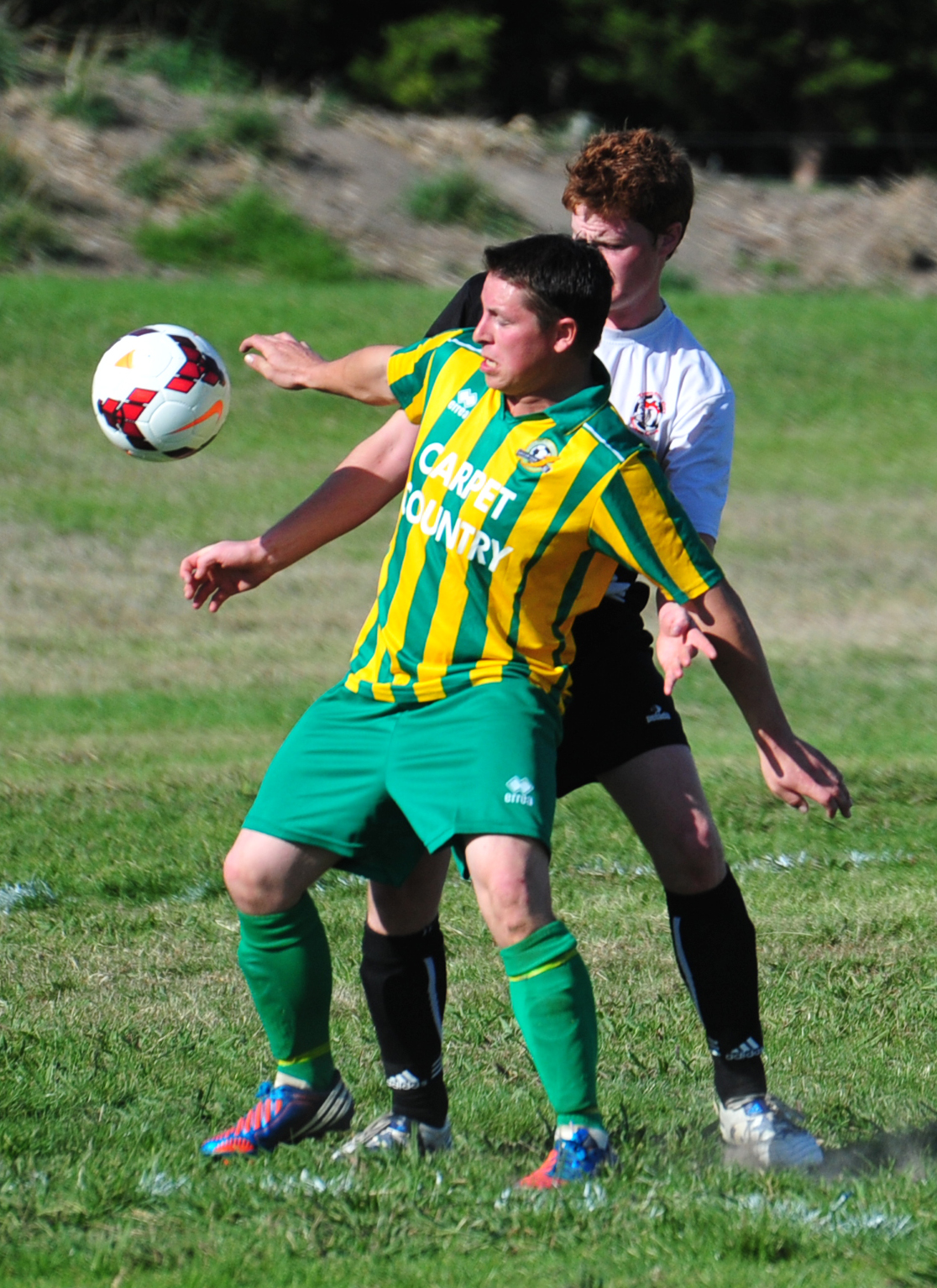 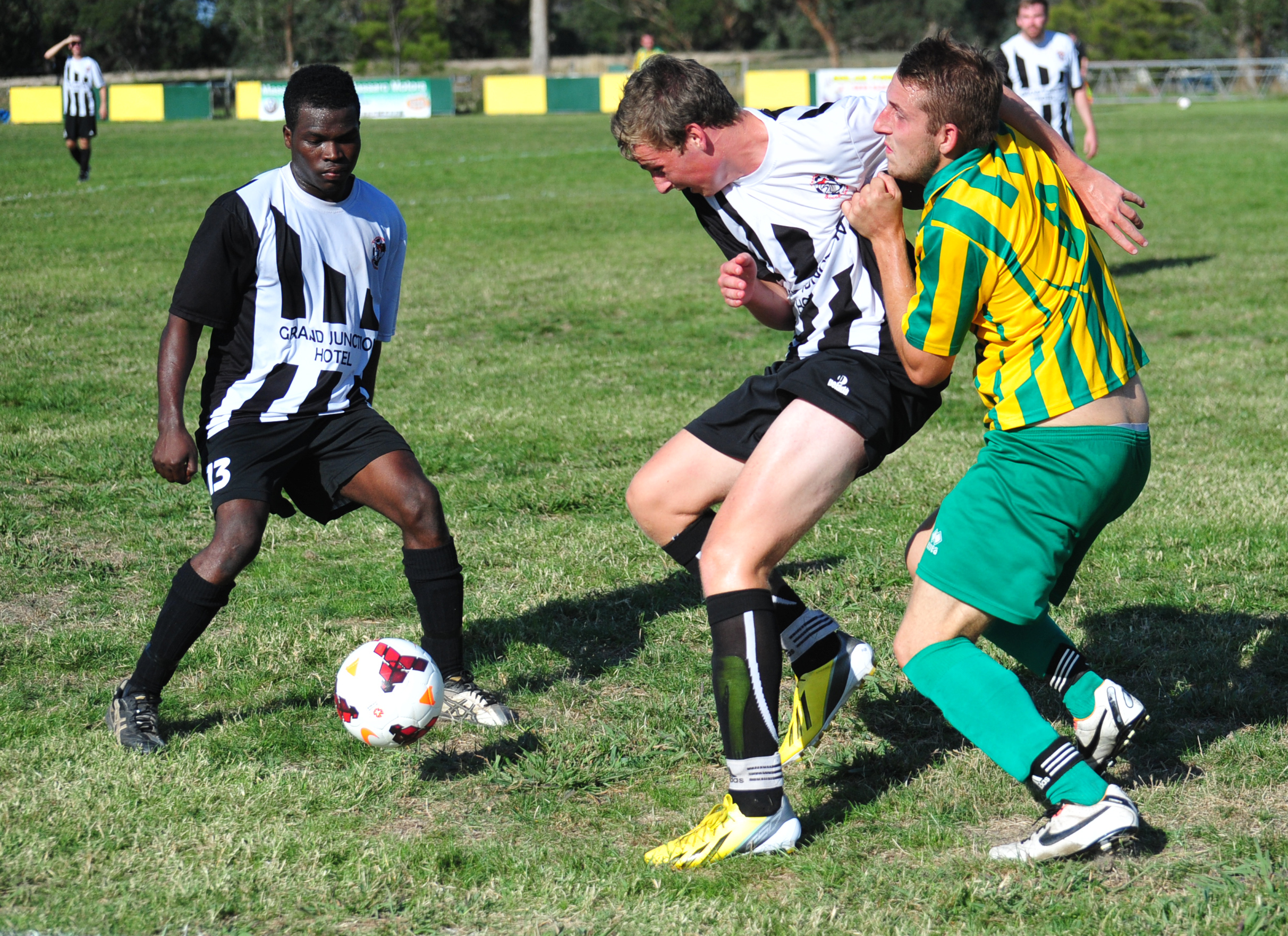 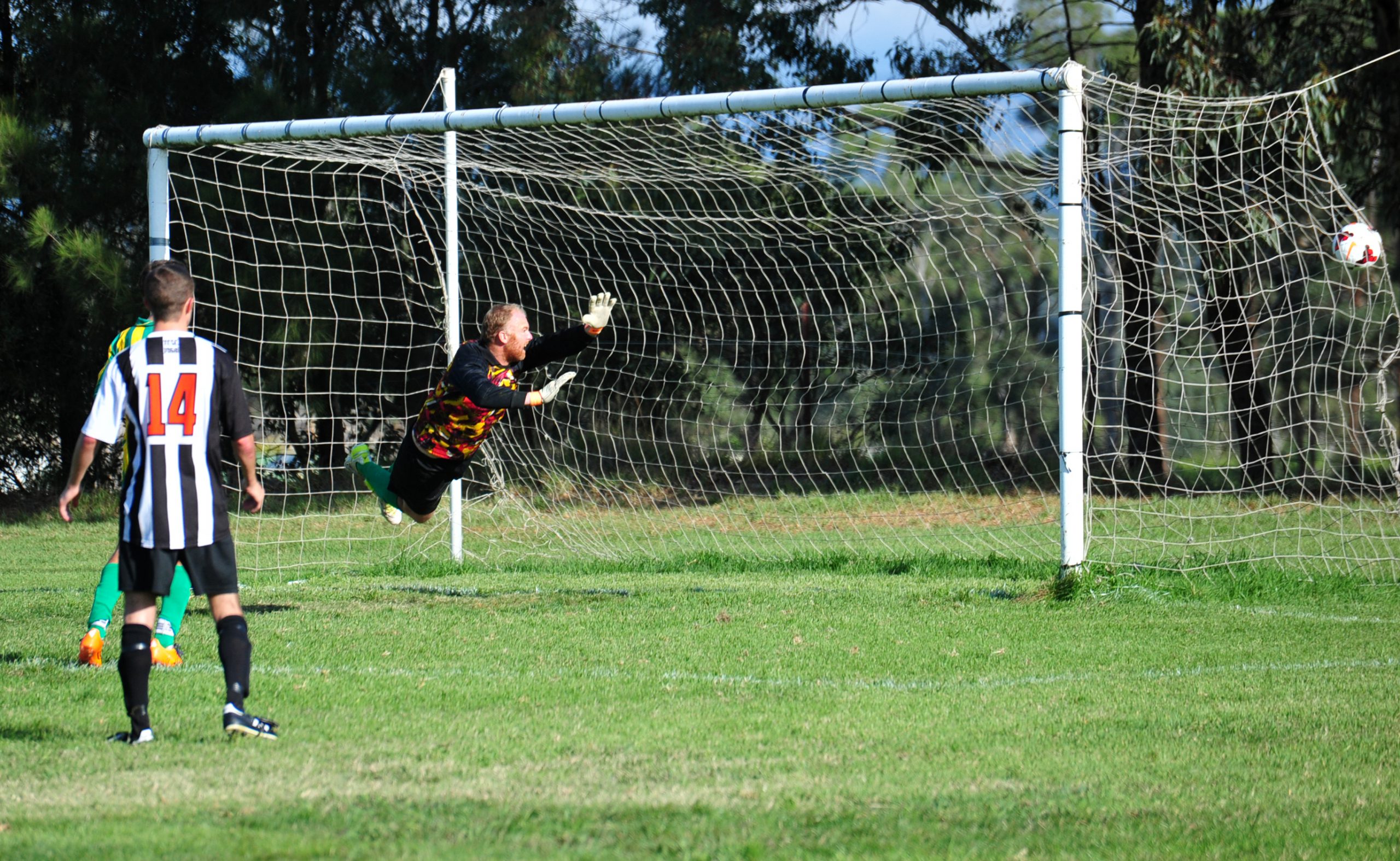 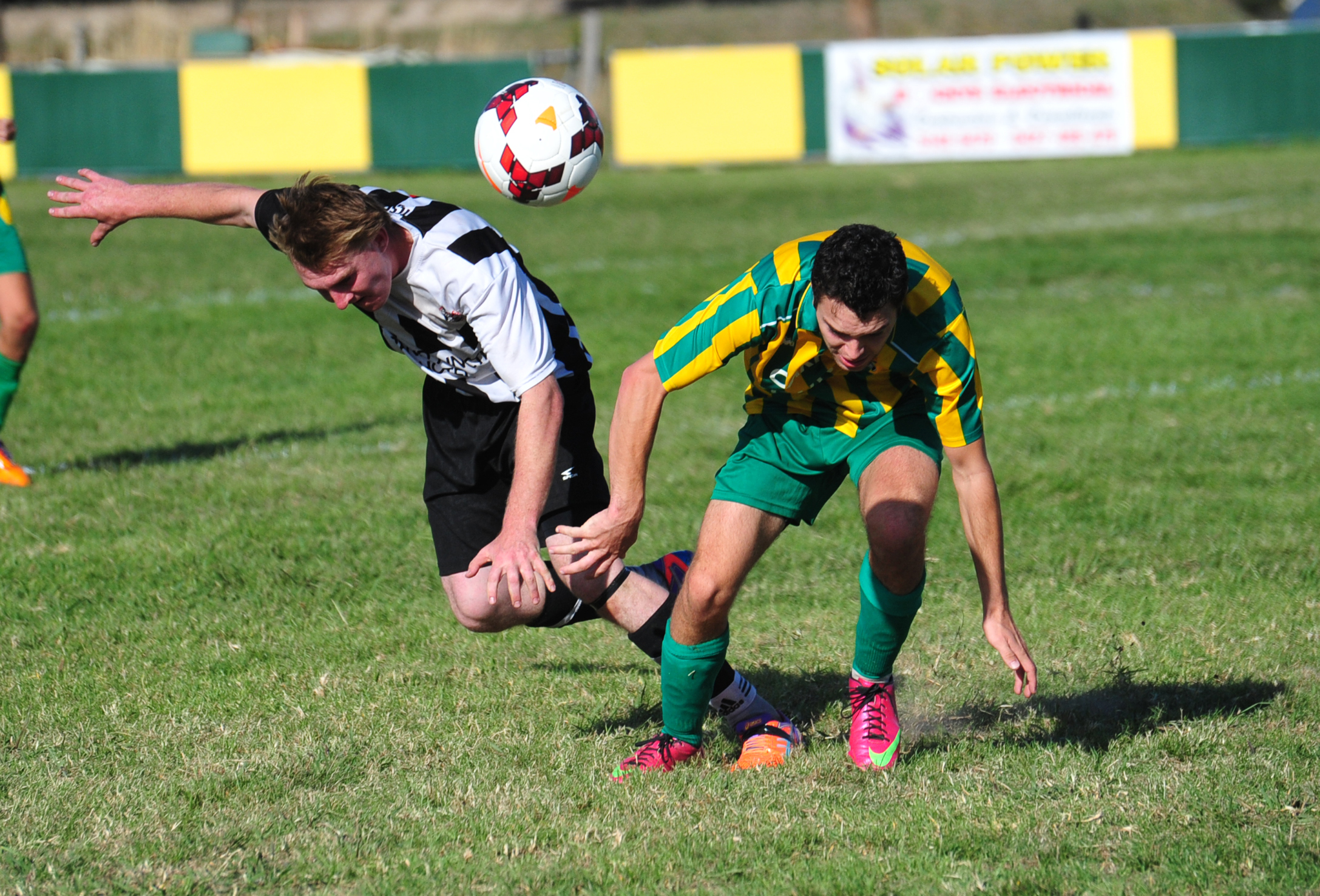 Tyers grabbed its first point for the Gippsland Soccer League season with a fighting 2-2 draw at home to Traralgon City.

With new coach Richard Lehrner replacing Con Nicolopoulos ahead of the clash, the Lightning brought the thunder early, striking twice in the first half through Jake Budisa and Cameron Mccallum.

Roosters frontman Mark Fairbrother pegged one back for City to make it 2-1 at the break, but Tyers continued to dominate possession early in the second half.

City forced Lightning to fire mainly from long range, and from the 60-minute mark began to dominate the game.

Speedy striker Dau Mayen was sneaking in behind the Tyers defence at will, and generated several promising moves with his pace.

City fired its first shot in anger on 65 minutes when Robert Speir blazed just over the crossbar, before a fiery exchange in the technical area saw Roosters coach Peter Lietzau ejected.

Tempers flared after a rough challenge on City youngster Daniel Holt, leading to the dismissal, and the Roosters rallied on the park following a brief dust up.

Braydon Bates saw red for a challenge on Mayen at the edge of the box, and Fairbrother drilled the resultant free kick past Steve Ward into the top right corner to make it 2-2.

Fairbrother had a second chance from similar range minutes later but fired high and wide, before Ward repelled Mayen with a desperate one-on-one save.

“We knew that Tyers were going to come out strong after getting rid of their coaches through the week and we knew this was a game we had to win, but they played really with a lot of heart,” he said.

“A point is better than nothing I suppose but we missed the chances that we should have scored. It ended up the game was a bit of fight-ball, it was hit and run.”

A TY Christy-hat-trick helped Monash rally late to claim its first three points for 2014 in a high scoring 5-4 win over Olympians.

The Wolves stamped their authority early as Christy and Isaac Abas made dangerous moves up front.

Christy opened the scoring midway through the half, placing the ball past Olympians custodian Ben Johnstone after receiving a Chad Shelley pass inside the area.

The visitor hit back immediately to make it 1-1, but as the interval approached Abas reclaimed the lead for Monash by smashing home at the far post from a Ryan Semple cross.

Monash should have closed it out straight after the break but was unable to turn promising build up into goals, and Olympians again struck to draw level.

Monash reclaimed the lead when Christy rose highest to head home an Ethan Lawrence, but it was again short lived as Olympians levelled at 3-3.

The visitor put its nose in front for the first time with 10 minutes to play after a quick counter attack saw Simon Ieradi slide past Ross Johnson in the Monash goal. With time running out Christy struck again but the action was not finished as Monash surged forward one final time.

Shelley latched on to the ball in the box, turned inside his opponent and blasted home to give Monash a thrilling late winner.

On a day of several milestones, Falcons ensured club stalwart Scott Mackeown’s 100th game for the club was an enjoyable one as the Birds convincingly beat reigning league champion Moe United 2-0 at home to send it to joint top of the table.

Moe began as firm favourites but realised it was in for a tough day when the home side came out full of vigour.

Falcons was unlucky not to take the lead early but midway through the first half in form striker Jesse Kennedy made amends, continuing his scoring streak with an astute finish from inside the area when sent through on goal by a sumptuous Tommy D’Alia ball.

Moe was on the back foot but continued to battle, however it could not fashion a clear cut chance on goal in the first half as the score went 1-0 to the break.

The Red Devils came out with renewed intensity after half-time and created a wonderful chance from a corner that was headed over.

Moe continued to press but a resolute Falcons backline continually thwarted any major advances on its goal.

With 20 minutes to go, a perfectly weighted set piece from Nick D’Alessandro was expertly nodded in at the near post by Joe Auciello to put the result beyond doubt.

The 2-0 win was Falcons’ third clean sheet victory in-a-row, a feat it had not achieved since its reinsertion to the Gippsland Soccer League.

Another Tommy Nguyen hat-trick propelled the Swans to a 5-1 triumph over Newborough Yallourn United away from home.

On the road for the first time this year Sale had NYU on the back foot from the get go, keeping possession and utilising its speed going forward.

The deadlock was finally broken in the 26th minute when a well taken free kick from Sale captain Ashley Ross found Robbie Stephen, who took his opportunity well and headed past goalkeeper Justin Mathison.

Sale was awarded another free kick on the 30-minute mark and dynamic forward Tommy Nguyen stepped up, finding a gap to make it 2-0.

Minutes later Nguyen added to his tally with a thunderous shot after cutting inside the Newborough defence, leaving Keeper Mathison helpless.

Up 3-0 at the break Sale made a few changes, bringing on new recruit Slade Whitfield.

The Swans continued to dominate play and were rewarded in the 55th minute with a well taken header by Jon Piefke.

Nguyen added a fifth to round out his hat-trick for the day before Newborough was rewarded for its endeavour with a well taken consolation goal, scored by Jayden Shaw.

Sale United will now turn its attention to Fortuna this week at Baldwin Reserve.

Man of the match Ray Myers inspired Churchill United to pass its first major test of the season with an impressive 3-0 victory over arch rival Fortuna on Saturday night.

The Rams dominated play in the first 20 minutes and if not for a spectacular diving save from Fortuna custodian Justin Kosakiewicz Churchill would have claimed an early lead, but Jamie Robson’s authoritative header was tipped around the post.

Under returning coach Dominic Palermo Fortuna’s game plan of counter-attacking soccer was on show as Hayden Tanti and Jamie Pistrin began to press the Churchill defence to even up the balance of play.

Churchill took the lead when Myers went on a run down the wing, neatly dribbling past defenders before blasting his shot past Kosakiewicz from an acute angle.

Fortuna attempted to respond but Dylan Fairbrother’s blistering shot from 30 yards out was saved confidently by Churchill keeper Jason Sands.

Fortuna’s international recruit Mathew Ross was forced from the pitch prior to the interval with a wrist injury, but the Englishman surprisingly returned in the second half with arm strapped and stoically contributed despite obvious discomfort at every challenge he threw himself into.

Churchill almost made it 2-0 when striker Paul Riess rattled the cross bar with a long range shot soon after the restart.

It was soon 2-0 however when Myers claimed his brace after an inch perfect ball from Taylor Jackson sprung the Fortuna offside trap and allowed the burly winger to slam past Kosakiewicz.

Churchill ended the contest 3-0 when Riess collected a pass from Matthew Maselli to round Kosakiewicz.

Myers has been a huge asset for the Rams since stepping up from the third tier reserve grade last season.

Pegasys had the bye.