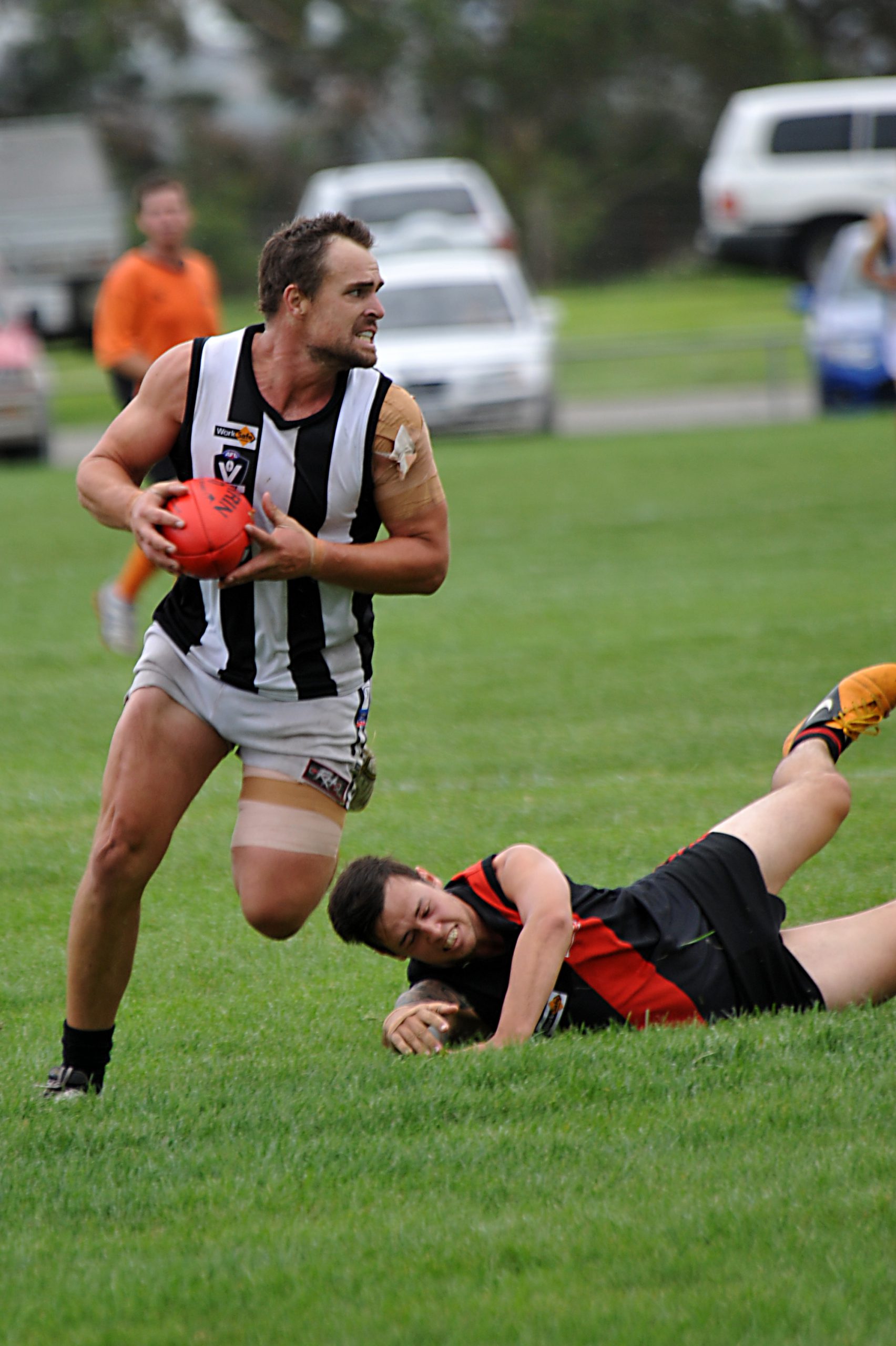 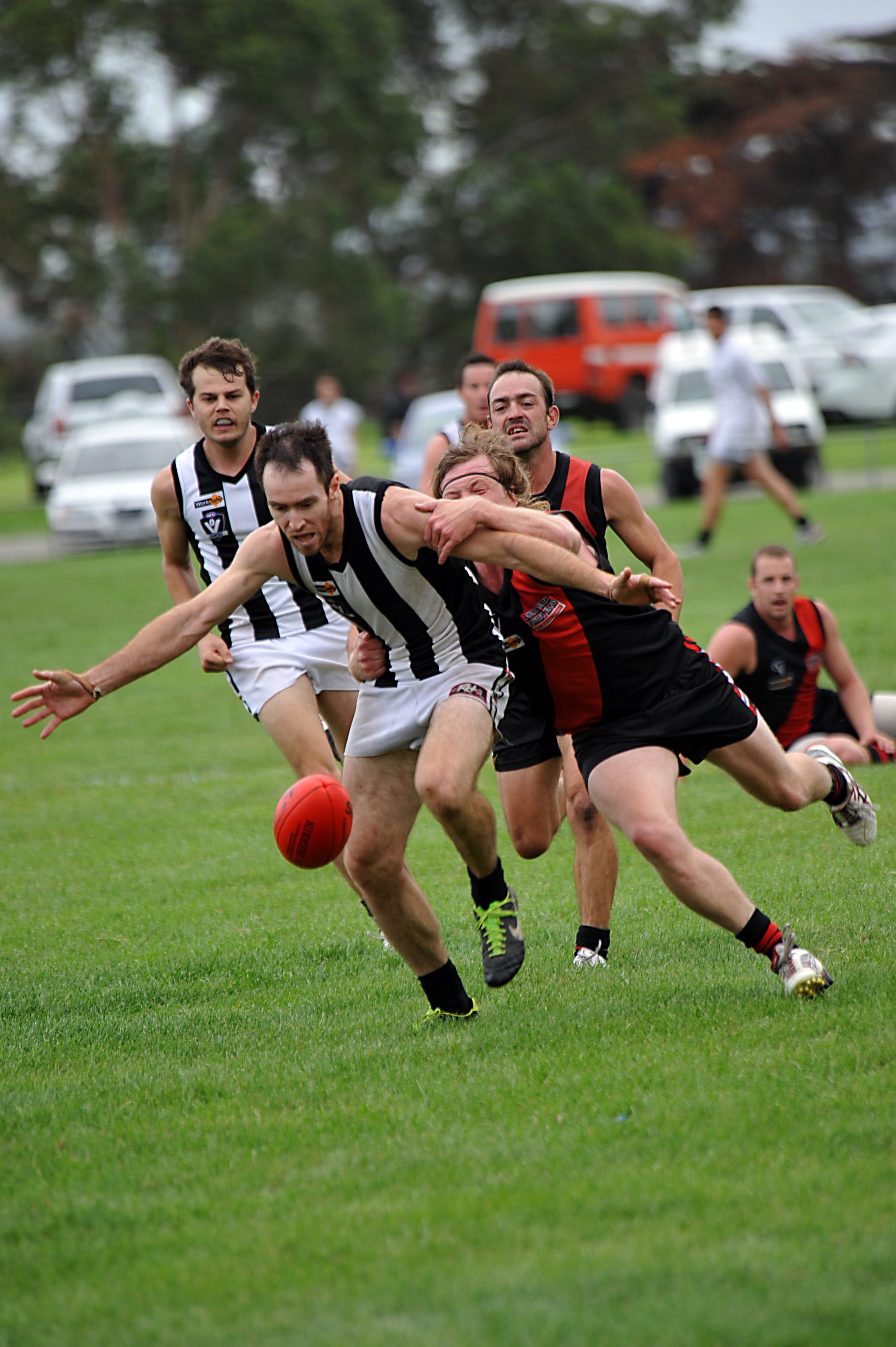 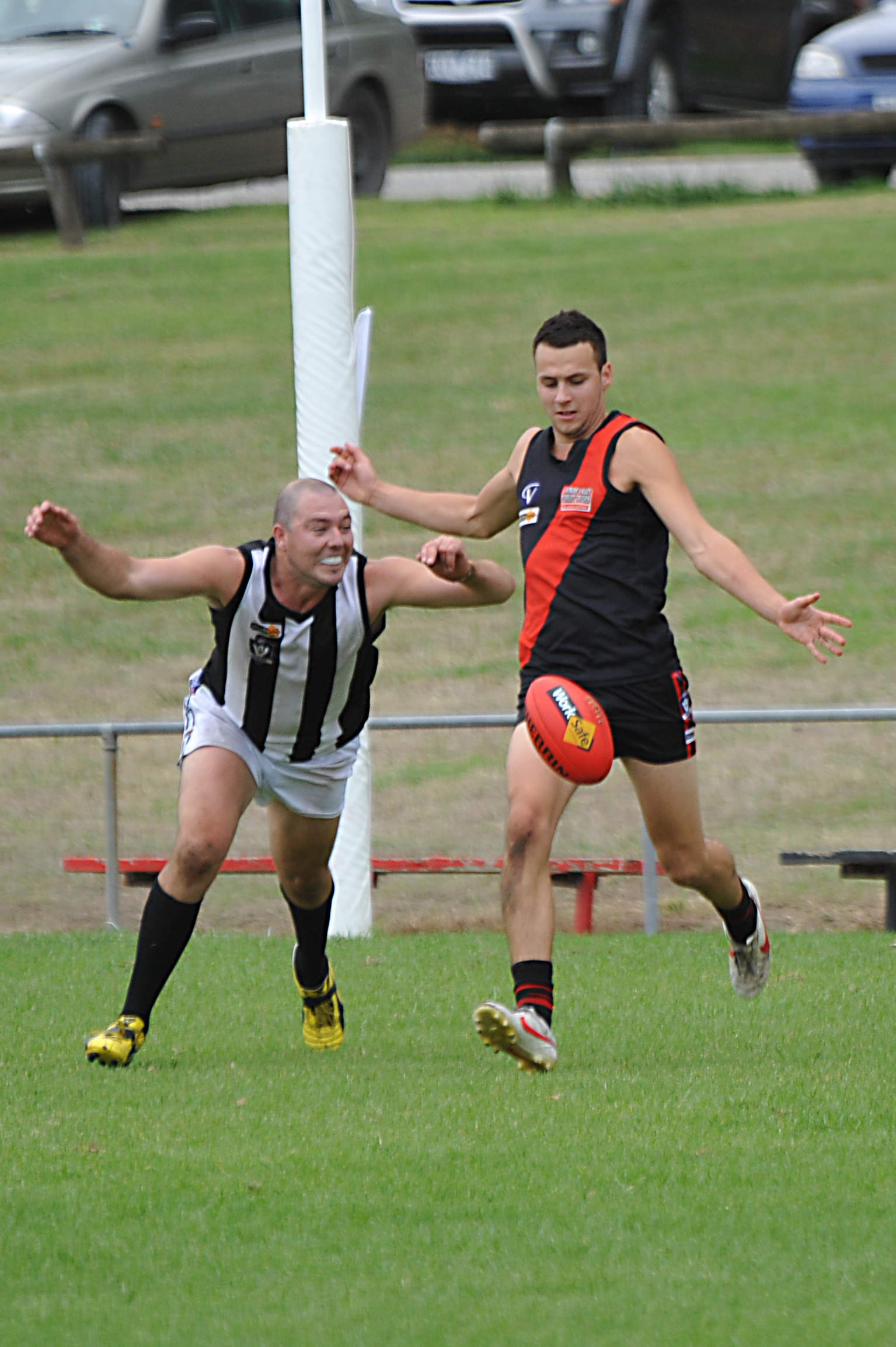 Trailing by 13-points at the long change, King’s three critical goals in the third term brought his side back ahead of a match winning final major.

King was kept well in check in the first half, however his strong contribution in a blistering seven minutes in the third saw the Magpies slam home four unanswered goals to regain control.

Fittingly it would be King who nailed the last goal of the game to effectively shut out the Bomber challenge. In a nail-biting final 10 minutes spectators were treated to a classic contest.

Taking a nine point lead into the final break, the visitor looked on song to open its season ledger, however TTU had other ideas and peppered away at the scoreboard to reel the margin back to a point midway through the final term.

There was no more exciting fixture than the contest between the new look Saints and Churchill.

Cowwarr burst out of the blocks with 11 shots in the first quarter to own a 27-point buffer at the quarter-time huddle.

After the unfurling of the thirds’ premiership flag earlier in the day several of their champion number stepped up to the ranks of senior level and caught the visitors off guard.

There was plenty of passion and pace in the contest early as the Saints’ running brigade of Brett Street and Pat Tainsh missed shots on goal before Bill Phelan opened proceedings.

There were wasted opportunities at the other end as well, with two missed shots in front of goal for Churchill in as many minutes.

The behinds continued when Brendan Holt missed before the Saints rebounded from defence with Brad McBride to register the same result.

With goals hard to come by, McBride’s vision to switch play from one pocket to the other set Shane Morgan up for his first of three for the day.

It was followed by another to Cowwarr as Churchill found itself quickly on the back foot and relegated to playing catch up footy. The visitor struggled to buy a goal; best on ground Travis Brighton exploded from the centre bounce to hit the chest of Dillion Leys but the big man’s shot from tight in the pocket missed all.

A late term major to the Cougars opened their account, before a booming kick from outside the 50 metre line saw Leys score as coach Allan Chandler’s direction of playing wide along the boundary came to the fore.

It would be followed by another when Chris Williams kicked his first of two as Churchill wrestled control of the contest and began to reel the Saints’ quarter-time lead in.

The second term belonged to Churchill as it held the home side to a mere behind to trail by a kick.

It would be Holt that inspired, levelling scores with the opener of the premiership term, as the Cougars stacked numbers around the fall of the ball to hassle their opponent into mistakes.

Holt’s major was answered by a strong mark to Morgan directly in front of goal, and his second levelled scores ahead of another to the Saints which provided breathing space.

The two sides traded blow for blow on the scoreboard; Churchill’s third of the quarter was followed by one to Street which created a two goal buffer to the Saints.

With both sides left one man down following the carding of Joey Whykes and Luke Cooper, the Saints added their second on the run with best on ground Robbie Ferguson in on the action.

A thumping kick to Nick Celima made it a 10-point ball game before Churchill attained the lead through Williams.

It would be quickly relinquished when Morgan’s missed shot at goal was picked up by Ben Plozza who snatched the lead back.

Holt’s snap in the dying stages of the contest gave Churchill the lead, however the Cougars were forced to wait and watch a Brad McBride shot on goal after the siren. It fell short, much to the relief of the Cougars, who clung to a two-point victory.

A seven point lead favoured the Tigers at the first break before the Bombers turned the tables to lead by a behind at the long change – a lead they would extend to 13 at the final break.

The two sides went blow for blow in the final 30 minutes of the contest.

Danny Pratt was the go to man in front of goal for the Bombers while the duo of best on ground Luke Francis and Sam Marks lit up the forward line for the Tigers. Trading blows on the scoreboard the Bombers kept within arm’s reach before a late major saw the visitor hold on in a nail biting five point victory, 15.7 (97) to 14.8 (92).

Boisdale’s majors came through Pratt who was the lead goal scorer on the ground with four.

For the Tigers, Luke Heggarty was impressive in his 150th club match while Marks’ performance was vote worthy.

After a low scoring opening term, the Kangaroos stamped their supremacy in a performance much like last week’s second quarter.

The home side slammed home seven goals to one to all but claim the points by the break.

A further nine goals were added to the Roos’ total after the break when Kodie Woodland (six) and Daniel Stubbe (five) took their opportunities in front of goal.

A large crowd flocked to Rosedale for the season’s first Sunday contest as Yarram provided stern competition for the Blues.

Trailing by 21-points at the final change, the words of Rosedale coach Nick Leechino rang in the ears of his players as they came out firing in the final 25 minutes of play to run over the top of the Demons six goals to two.

After leading by 17-points at half-time the Demons did all they could to hold the Blues at bay in the third term and restricted the home side to 1.4 (10) and appeared poised for a second win.

However it was a case of deja vu for the Demons as they dropped off in the final term, this time to be overrun by 11-points at the final siren.