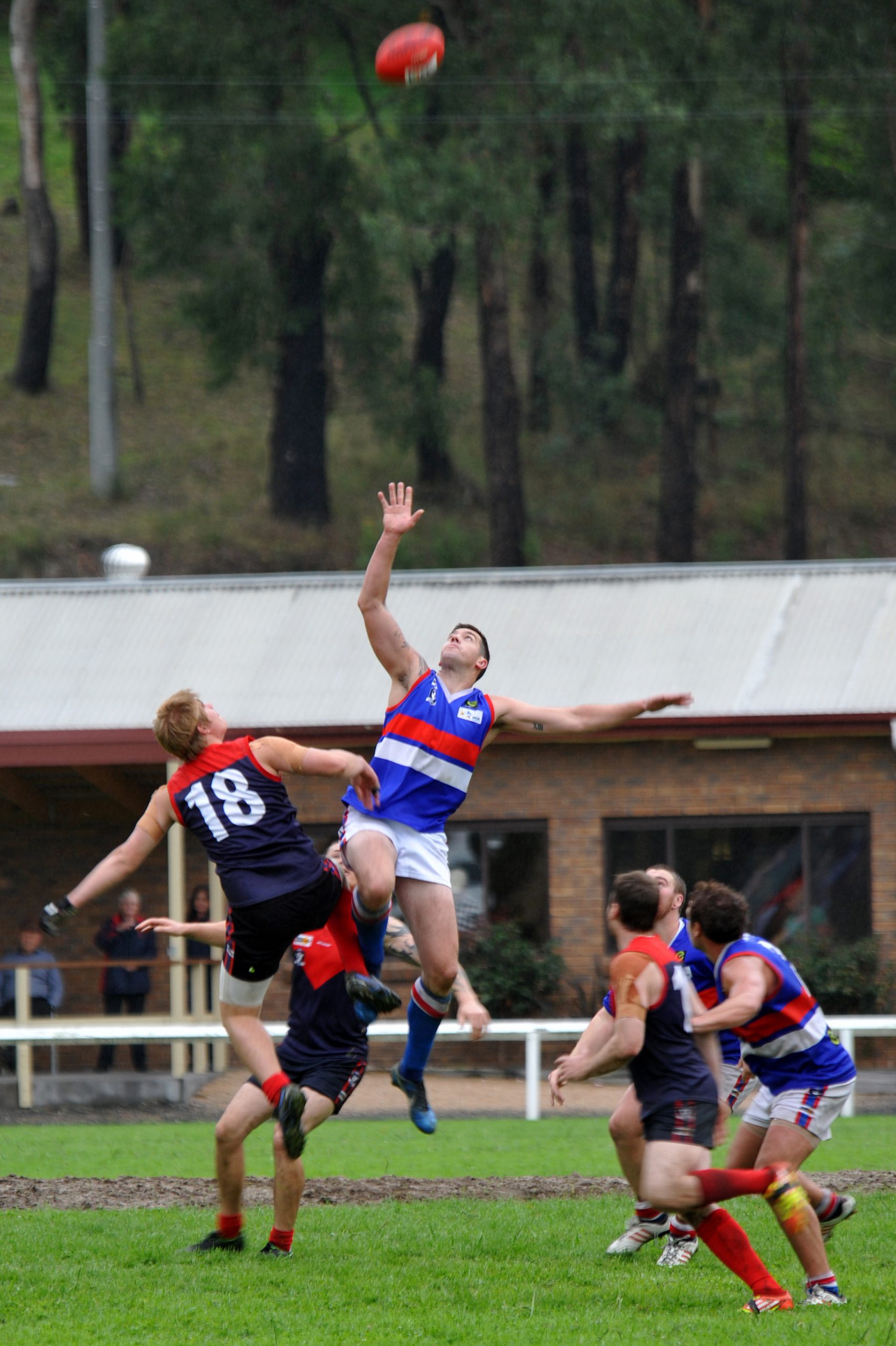 WET conditions turned many Mid Gippsland matches into mud slogs by the finish in a frustrating weekend of football.

Thorpdale earned a first win for rookie coach Nathan Scurrah, Trafalgar retained the Waterloo Trophy with a barnstorming victory over Yarragon, Newborough dashed Boolarra’s hopes of a double by inflicting a 21-point defeat while Mirboo North made it two in a row at the expense of Hill End.

Newborough’s long list of injuries did not stop it conquering Boolarra in a tight game played in greasy conditions.

The Demons were expected to push Newborough and for three quarters did so.

While Boolarra did not head Newborough at any stage, it got within four points at three-quarter-time.

Bulldogs coach Glenn Michie stirred his team into action in the last term with some inspiring play, and the whole team lifted.

Newborough produced its best quarter of football to run out 21-point winner and remains one of two undefeated teams.

In a day not suited to forwards Rhys Jacobs and Mick Gelagotis both nabbed two each for Newborough and former Hawk Steve Tobin Junior scored twice for Boolarra.

Newborough’s Brennan Mills, Daniel Risol and Jarrod Bennetts impressed, while for Boolarra Andrew Thorpe got the nod for the second successive week with good support from Ken Towt, Matt Buglisi and Jack Battersby.

Trafalgar blew traditional rival Yarragon out of the water to retain the Waterloo Trophy.

After a slow start, the Bloods scored 4.5 (25) in the first term to nil before the floodgates opened.

The Butler boys were instrumental in the big swing, Tyson Leys and Matt Riseley were holding their marks even in the greasy conditions and their accuracy was spot on as Trafalgar went on a rampage.

Yarragon had no answer and by half-time the Bloods led by 60-points.

The carnage continued after the break as Trafalgar added insult to injury with a further 6.5 (41) to 2.1 (13) and at three-quarter-time the only question was the Bloods by how many?

The answer was 121-points after another dominant term.

The alarm bells are now ringing at Yarragon.

After a promising start with an opening win against Yallourn Yallourn North, the Panthers have dropped two games by huge margins.

Trafalgar’s speedy outfit will be up near the top this season even though it went down to Boolarra last round.

Of the 24.20 (164) to 5.7 (37) win Leys and Riseley both scored four for Trafalgar to be among the best on ground along with Jace Butler and Joel Bragagnolo. Michael Hughes scored three and coach Anthony Pavey booted two for the Panthers.

The Blues heeded the call made by their coach but it was not a pretty match to watch with conditions at the George Bates Reserve wet and miserable.

Thorpdale adapted to conditions better and popped out to a 18-point lead at the first break and was never headed, increasing the margin to an eventual 52-point win. Coach Nathan Scurrah made his first appearance and would have been pleased with a couple of goals.

The match was virtually over by half-time and players went through the motions until the final siren.

Tim Lappin topped the Blues list with three goals and was also among the best along with Corey Celima, Brendon Santurini, and Deen Allen.

For the Bombers it is going to be a tough road ahead, but there is still hope in the camp that a win is not far away.

Braden Paulett, Dale Murphy, Owen Budge and Derk Pol were among the best.

Mirboo North won its second match on the road by 51-points over Hill End in cold and blustery conditions. Setting up the win in the first quarter the Tigers were able to score at a regular rate.

Tim Traill was the focal point up forward and by the first break he had three majors.

Hill End has now been on the end of three losses, which is a far cry from last year’s efforts.

Mirboo North was never in danger of defeat, but endured a few worrying moments as Hill End found some weaknesses in a normally strong defence.

Traill was back to his best with six goals and a best on ground effort, with great assists from Jacob Nash, Joe Brooks and Josh Taylor.

For the Hillmen, Richard Horton, Phil Town, Simon Fiddelears and Joshua Costa were voted as best.

Yinnar retained top position to remain one of two unbeaten teams after round three.

Yinnar started the day well and by the first break established an 18-point lead, but this was whittled back by the East which drew level at half-time.

Frankie Marks was playing well up forward and was the primary target, finishing with five goals.

It was still anybody’s game up to three-quarter-time when Yinnar led by seven-points.

Smart moves by Yinnar coach Sam McCulloch enabled his men to be more direct toward goals.

Yinnar edged further ahead to run out winners by 41-points.

James Dowling was in medal winning form and was ably assisted by Jayden Embry, Reece Malcolmson and Daniel Yates.