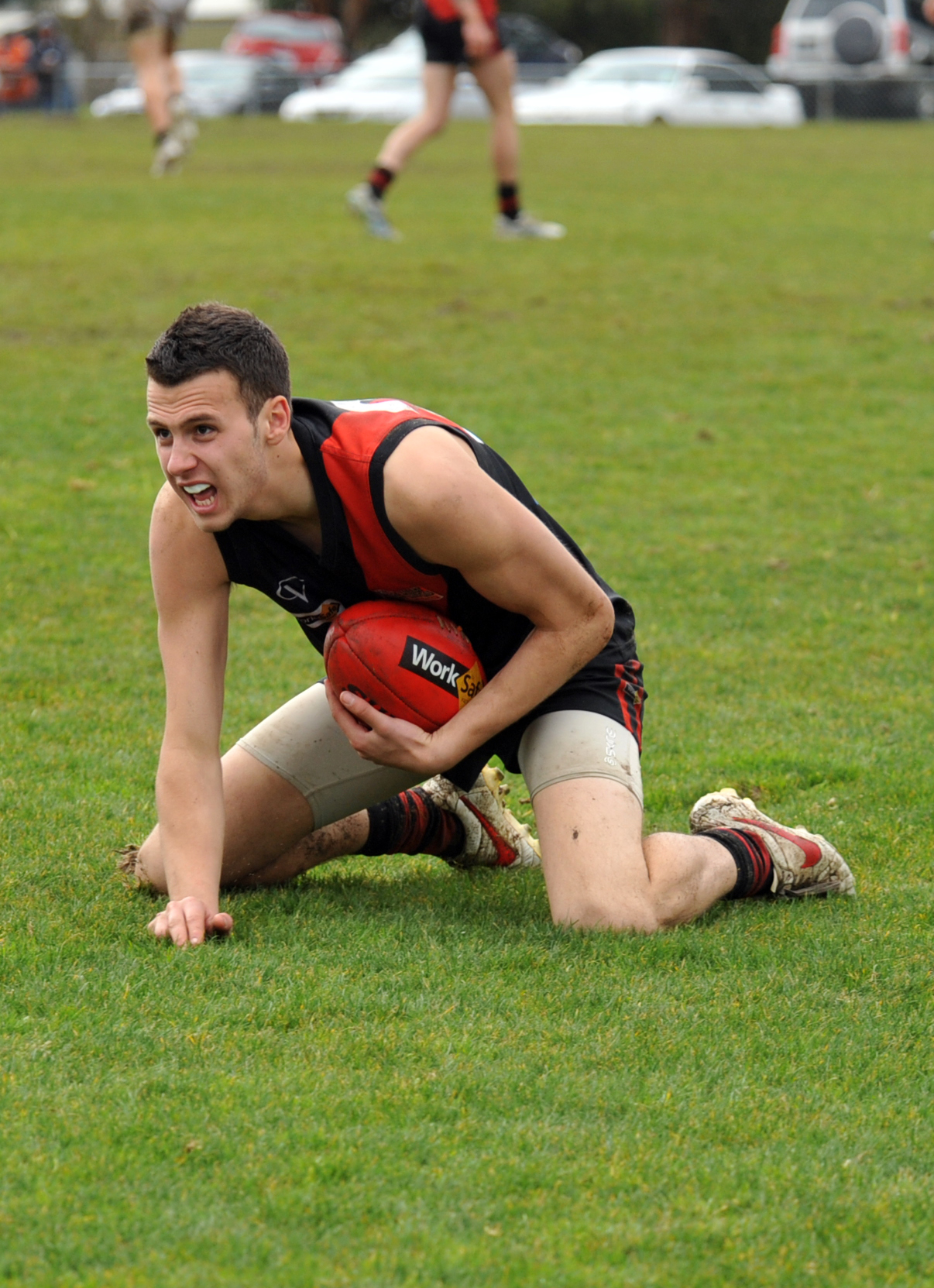 WET and slippery conditions challenged many sides across the grounds, and the clash between two improving teams, Sale City and Boisdale/Briagolong, was no exception.

With a large crowd taking cover from the weather on the sidelines, the Dogs’ young pups excited as the Bennetts – Mitch and Beau – owned the forward 50 early in the contest.

The visitor got off on the front foot when Brandon Rathnow combined with Jake Evans to open proceedings, before the Bombers rebounded from defence to register a major of their own.

As the rain increased, both sides squandered chances in front of goal before Mitch Bennett scored his first of five for the afternoon from outside 40 metres.

Rathnow contributed his second goal assist for the term before his own major made it three unanswered for the Dogs.

A 50 metre penalty gifted Mitch Evans his first as the Dogs skipped away to a 19-point lead at the first change.

The Bombers had their chances; Jim Cook missed early in the term before Matt Lee looked to steady the ship.

Outscoring the visitors in the third term the Bombers reeled in the deficit, but were little match for the Dogs in the last.

Simon Jackson was named best on ground, captain Nicol Sandison never dropped his colours while Lee wore his various opponents like a glove in a strong tagging role.

When the game was briefly in the balance, it was City’s talented youngsters who put the pedal down.

Both Mitch and Beau Bennett were sublime, Rathnow was key in setting up several majors and was among the play throughout the afternoon while Josh Barbetti was a solid contributor.

An undermanned Traralgon Tyers United failed to plug the holes in its depleted cavalry as Heyfield turned in a clinical performance.

Struggling to make an impact on the scoreboard throughout the contest the Bombers were forced to play catch up footy early on and were simply no match.

Registering a mere one major per quarter, last year’s semi-finalist was left to watch in awe as Heyfield key forwards Daniel Stubbe, who booted five goals for the match, and Jesse Bedggood stood up and stretched the Bombers’ back six.

The final scoreline of 15.16 (105) to 4.7 (31) could have been far greater had the Kangaroos seized all their opportunities in front of goal.

Heyfield defenders Scott Anderson and Matt Goodwin were named among the best, with midfielder Jack Woodland collecting the votes for best on ground with his bold, aggressive approach and fierce attack on the ball.

For the Bombers Hayden Hector was named best.

Churchill claimed the Lakes Oil Cup with a five goal victory over Woodside at Gaskin Park.

After starting slow last week, the Cougars did not make the same mistake and broke away to an early three goal lead.

Churchill was well served in the engine room by Brandon Mahoney and Travis Brighton who gave their pacey midfield team mates and forwards first use of the ball. The Cougars continued the momentum in the second term, again outscoring the visitor to extend their quarter-time margin to 36 points at the main change.

There was little reprieve for the Wildcats, who struggled to match the pace of the Cougars on the wide open spaces of Gaskin Park, as Churchill cantered home eventual 30-point victors 17.11 (113) to 12.11 (83).

Glengarry clawed its way back from a five point three-quarter-time deficit to snare a climactic one-point victory over Rosedale in the match of the round.

For the second week in a row the Magpies rallied to come from behind and snatch victory at the death, and this week it was the Blues that felt the wrath of the reigning premiers.

In a level pegged opening term, the two sides exchanged blows on the scoreboard with Josh King and Mark Engley the go to men for the Magpies while Craig Mayman chipped in with three for the Blues.

Glengarry led by a point at the first change, a lead they would extend to three at half-time.

The third term was another even affair when the Blues registered three majors to two as play rebounded back and forward between the half-backlines, as Rosedale turned the tables to lead by five-points at the final change.

The Magpies regained their poise in the final term to outscore the Blues three goals to two and for the second week in a row overrun the opposition in the dying stages of the contest.

Glengarry’s Dean Pearce and veteran Trevor May were solid performers and were named among the best.

For the visitor the goals were shared among five individuals with Jed Hickey and Dale Fleming dogged performers.

Yarram recorded its second win of the season despite a scoreless final term.

The Demons have faded regularly in the fourth quarter to date and did the same again on Saturday against the Saints.

Yarram started strong with a 10-goal to four opening half, and the Demons’ potent forward structure slammed 10 goals in a blistering third term.

Ryan Underwood slotted home four and Corbin Sutherland added three to his season tally of 10, with the pair two of 12 individual goal scorers.

For the Saints Siaosi Lay-Blake was named best on ground, while Sean Alexander and Cory Banister were solid performers.