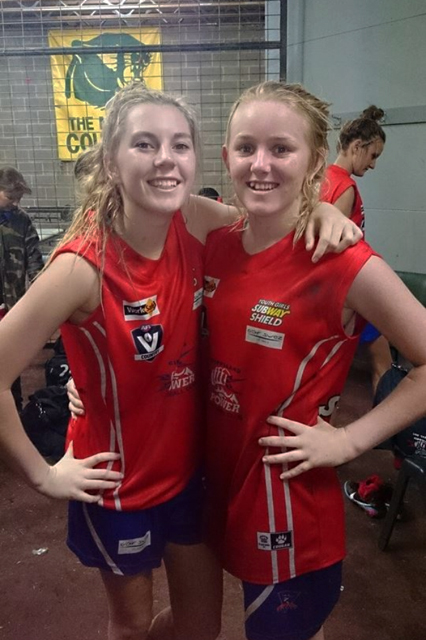 GIPPSLAND Power’s first female team made a huge impression at the V/Line Cup youth girls competition last week, finishing runner up to Geelong by a single point in its debut tournament.

The 24-strong team, hailing from Pakenham to Mallacoota and comprised primarily of players from other codes, handed heavyweight Ballarat its first loss in three years to begin its campaign with an 8.11 (59) to 1.3 (9) drubbing.

Ballarat was kept scoreless through the entire first half in a dominant display by a fleet-footed Power posse.

After 12 weeks of training under coach Nikki Schroeter, even the opposition was full of praise for the Power’s performance.

“The coach of that team was absolutely amazed with the talent that our girls had, he actually said to his girls in front of ours ‘that’s what football is all about’,” she said.

Fellow newcomer Western District received the same treatment at the hands of the Power in the second and final pool match, as the Gippsland girls got up by 72-points, 13.12 (90) to 3.0 (18) to qualify for the first place playoff.

Shayla Marsh kicked three goals in the rout, as did Casey Sherriff to take her tournament total to five.

Rain reduced Northcote’s Bill Lawry Oval to a boggy marsh for a low-scoring final against Geelong.

Both sides managed just the one goal each in the muck and mire, but Geelong’s three behinds to the Power’s two saw the metropolitan side home by one point.

Power led all match after Shayla kicked a major in the opening term, however Lucy Degroot’s final term goal rescued the result for Geelong, 1.3 (9) to 1.2 (8).

“It was pouring, it was just a big mud-bath,” Schroeter said.

“The ball was all over the ground, it was not a real game of football, it was horrible conditions.”

Despite the narrow loss, Schroeter said the performance of the newly formed team exceeded all expectations.

“The girls put everything they’d learnt in training (into practice) and we couldn’t be more proud of the way they represented themselves and Gippsland,” she said.

“It was my first time coaching at such an elite level, these girls showed me what they’d learnt, put boot to ball and gave it a real hard crack.

“We were blown away with how well we did… we had the pace that no-one else had… we got that ball moving and they couldn’t keep up with us.”

Two Power girls, Brodi Pedretti and Shani Dixon, were selected in the state under 18 side, and six of the side’s number made the

As the AFL continues to work toward a TAC Cup female equivalent, Power will regroup in November ahead of the 2015 tournament.

Schroeter said the girls were “shattered” the tournament was over, and many wanted to continue training, while some will join local sides contesting the Gippsland girls youth competition, gearing up for its second season.

Others will continue to keep their skills sharp under Schroeter’s tuition at Lavalla Catholic College, as the school targets back to back School Sport Victoria state titles.

“There was a few girls saying where can we go from here?” she said.

“Now I think we’ve started something it’s only going to get better. That shield will be ours next year.”

Schroeter thanked the girls’ parents for their ongoing support of the program.