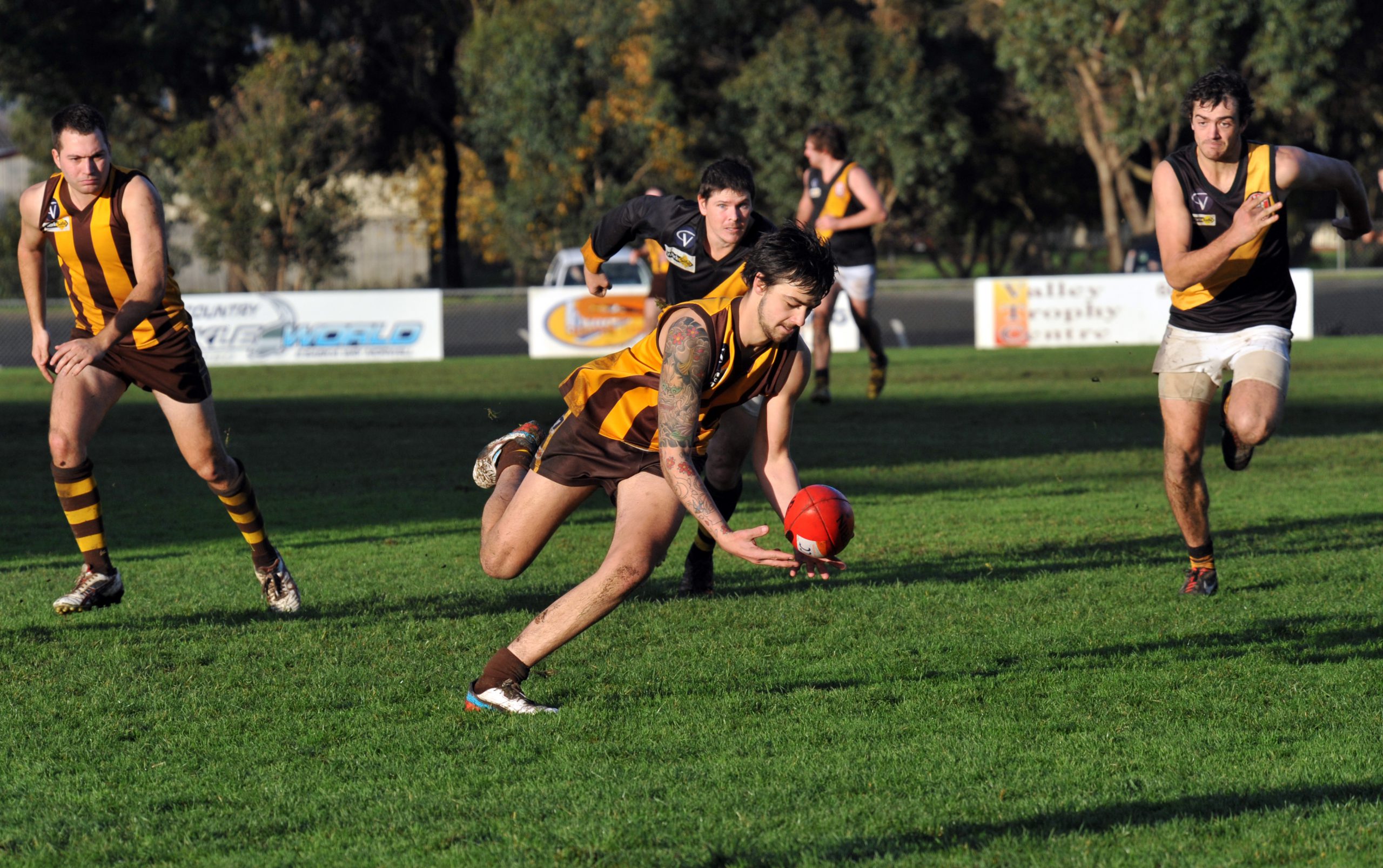 TWO matches stand out in round six of the Mid Gippsland Football League.

Sixth-placed Morwell East plays away to fourth spot Mirboo North and top side Yinnar travels to third on the ladder, Trafalgar.

Both games will have implications as to the make up of the four, even at this early stage of the season.

MIRBOO North has suffered just one defeat, albeit a flogging, while Morwell East has only won two of five after losing the past three.

Clashes between these two have been fierce affairs in recent times and Saturday should be no exception.

Both coaches know the importance of a win; for Mirboo North it would mean a shot at grabbing second position while Morwell East is caught up in the log-jam and hovering around sixth position.

The Tigers have most of their players back and are nearing full strength, with key forward Tim Traill picking up steam after a bag of eight last week.

Morwell East has failed against the top three teams – Newborough, Newborough and Trafalgar – but can ill afford to drop this match if the Hawks are to climb upwards. They have the potential to be in the four but on field performances have been below their best.

This game has all the hallmarks of a mighty clash with the undefeated Yinnar up against a revitalised Trafalgar.

The Bloods have re-invented themselves after a second round loss and are playing exceptional football.

Their will and stamina will be tested against Yinnar, which has running players, goalkickers and a strong defence.

Yinnar has the best of both worlds at the moment with a mean backline, letting through an average of just 39.8 points per game while amassing a median 129.4 points. Trafalgar’s figures are 84.8 for and 47.8 against.

Yinnar’s biggest find for the year, Tim Aitken, is having a good time in Mid Gippsland after crossing from the Gippsland League and has scored 21 goals in four games.

He is not the only target and Yinnar has plenty of players who can kick goals when required.

The Pies should continue on their merry way and take the points.

NOT much separates these two on the ladder with one win each.

Yarragon beat Yallourn Yallourn North in the opening match then suffered four losses, while Hill End took three games to get going before finally breaking through for a much needed win against Thorpdale two weeks ago.

Both units have gone through the injury cycle with better players out, making it difficult to field a top team each week.

Hill End tend to make it hard for visiting teams and Yarragon will have to work hard to upset the Hillmen.

WITH two wins to one Boolarra goes into this game as favourite, but Thorpdale has yet to reach its full potential with injuries and work commitments decimating the club.

Boolarra has also suffered but can proudly boast a win over a top four side, while Thorpdale can only claim YYN as a victim.

The return of Nick Hider will boost the Demons, but they still lack depth of reserves to fill senior spots when required.

Thorpdale has had great service from recruits Kris Bedford and Rhys Gieschen and more support for them could give Thorpdale a bit of an edge.

This one will be closer than expected and the Blues may just get over the line.

THE Energy Australia Cup is up for grabs between Newborough and YYN with the unbeaten Dogs firm favourites to retain the coveted trophy.

Newborough can be pressured to play below its standard but with five wins on the trot is looking finalist material.

The Dogs are expecting a hard game against the Bombers and with reputations at stake Newborough should prove too good.

Mick Gelagotis has found his form in front of the sticks and will be called upon to score a bag for the rampant Dogs.