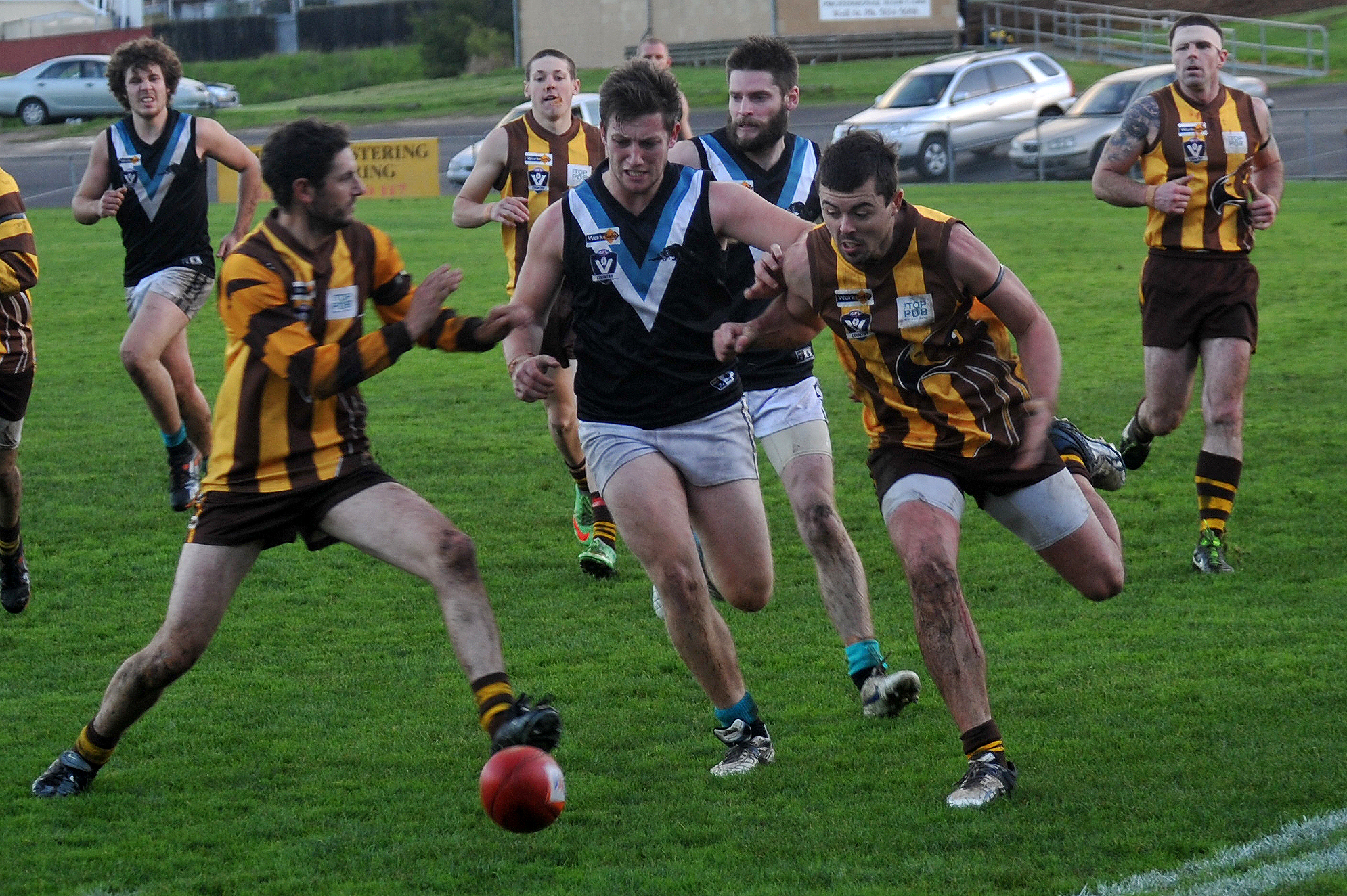 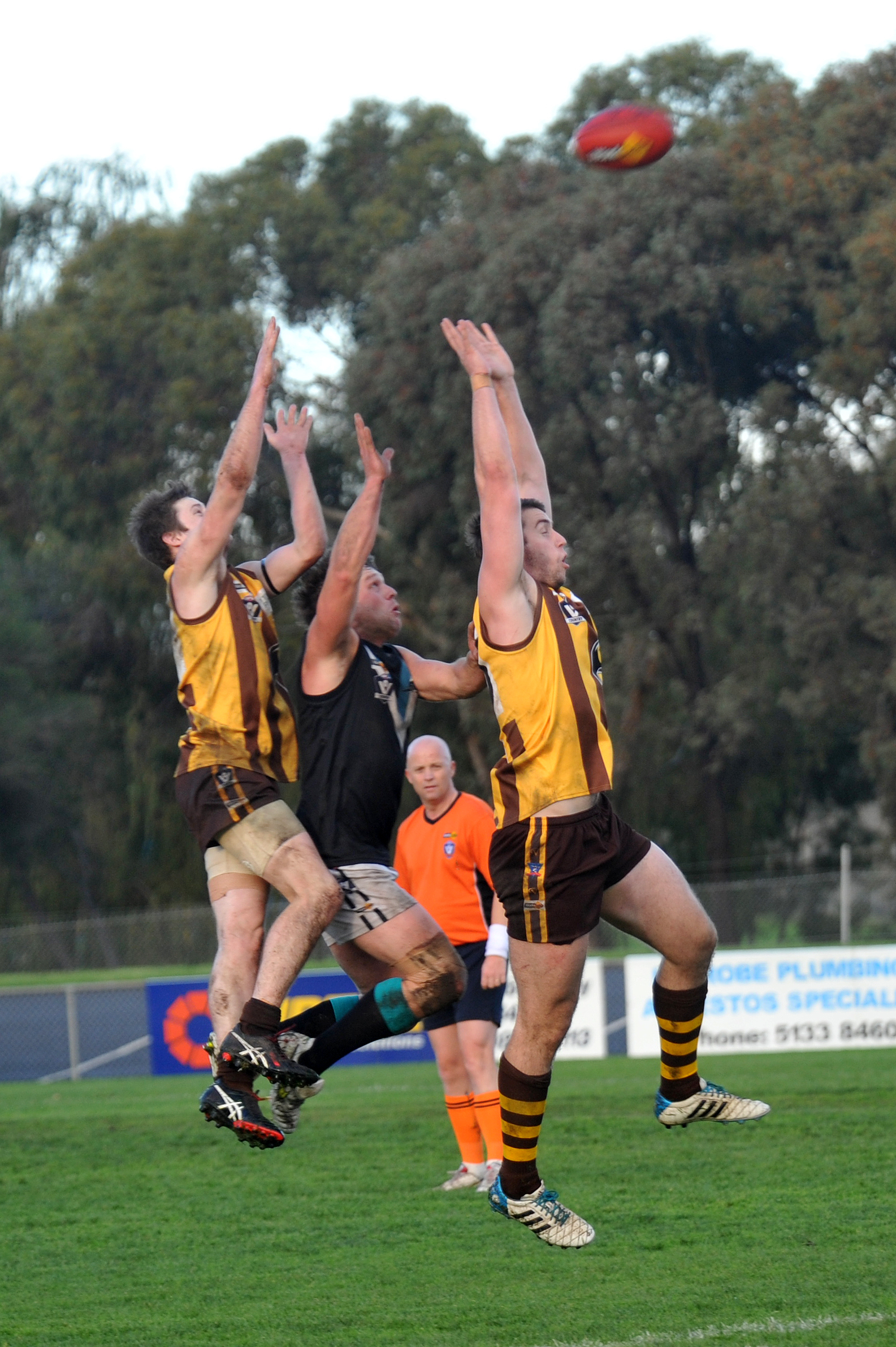 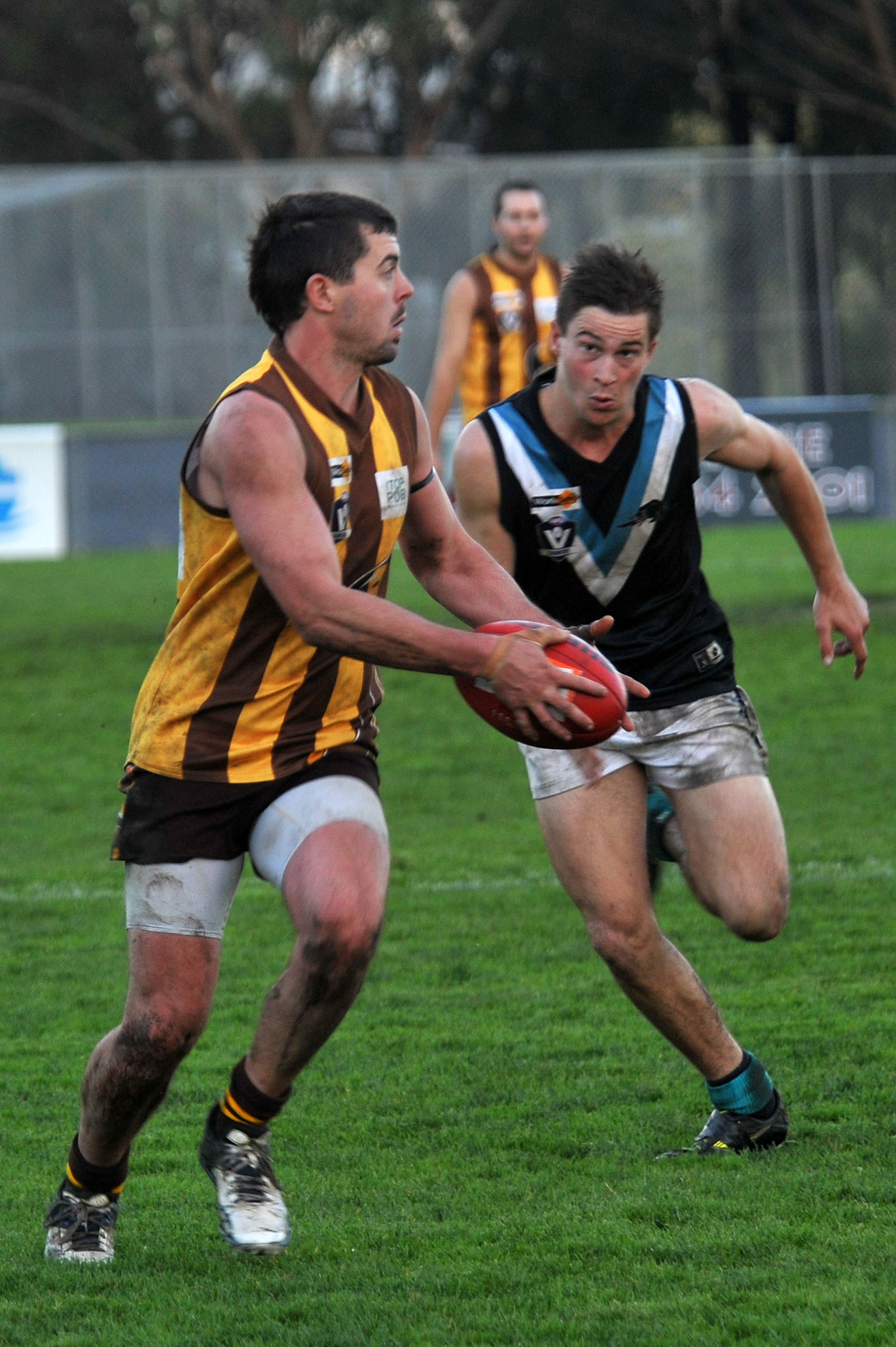 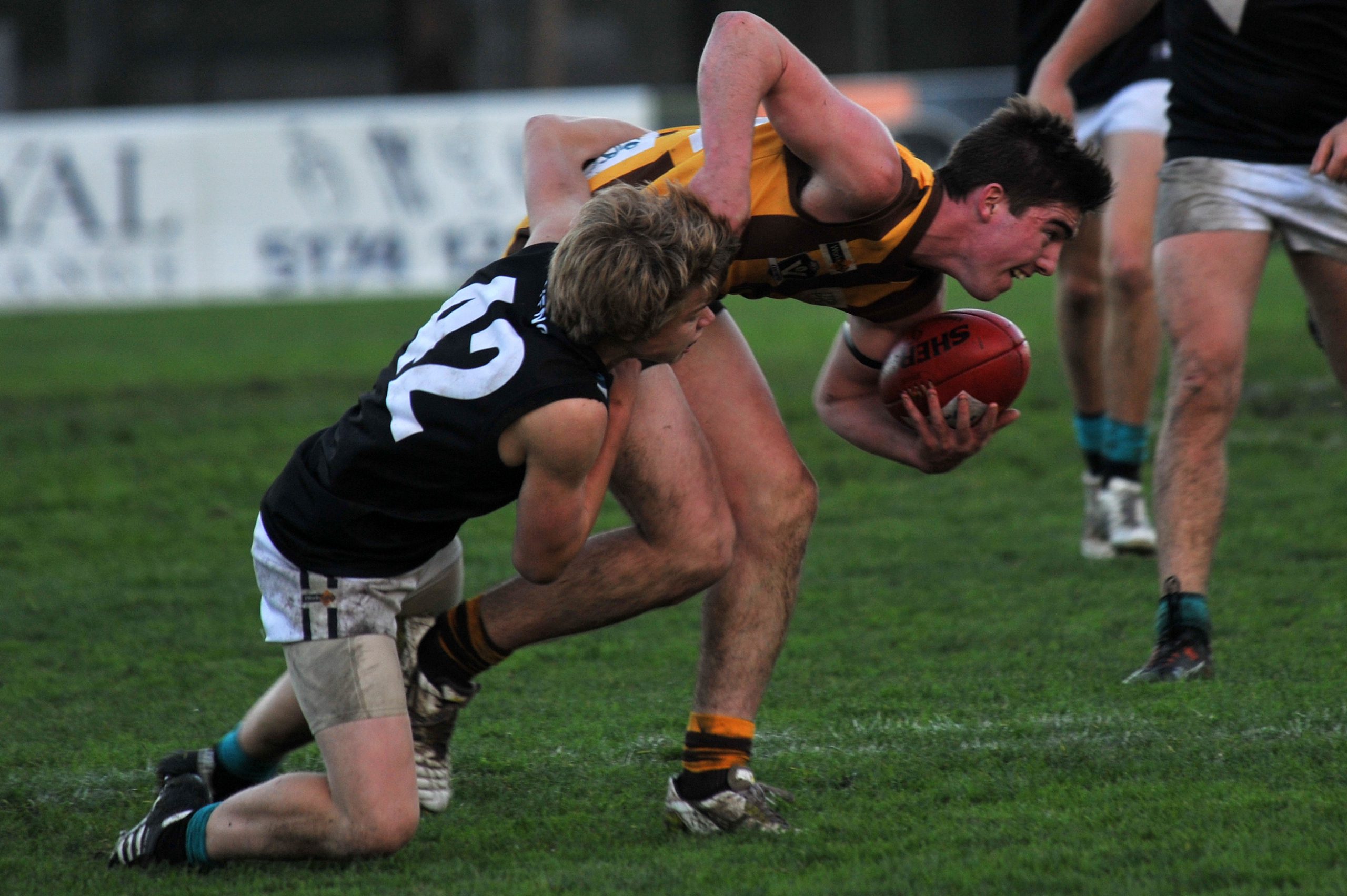 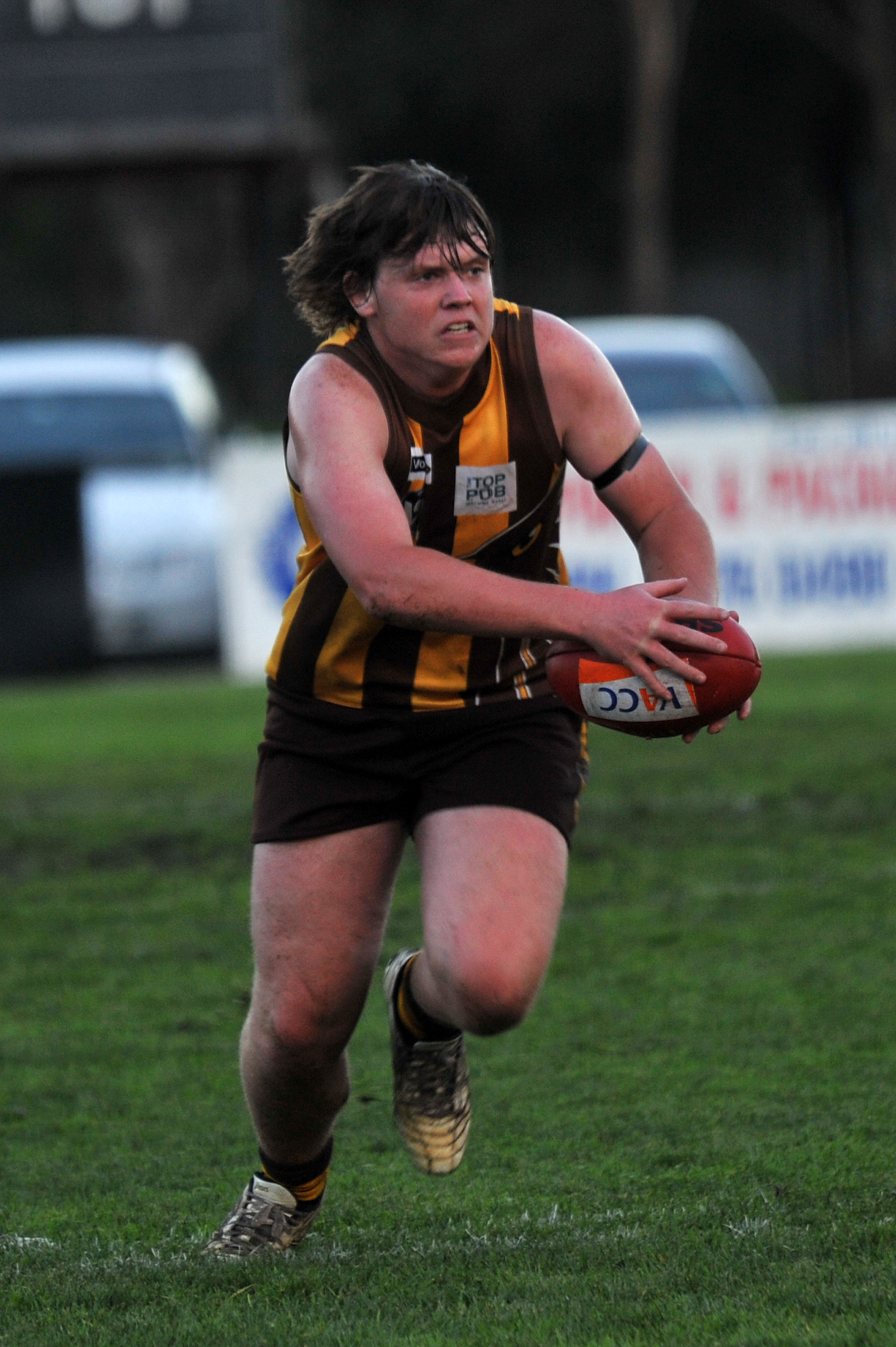 THE final round for the first half of the Mid Gippsland football season produced a couple of surprise results, with last week’s mega-winner Mirboo North beaten by fourth-placed Trafalgar, with ninth spot Yarragon withstood a barnstorming Morwell East to win by 33 points.

PERHAPS the biggest surprise of the round was Yarragon’s victory over Morwell East, the Panthers’ second win for the season.

The Panthers played exceptional football in the first half, starting with a 5.2 (32) to 1.1 (7) first term, using the ball well to position.

Reliable Hawks forward Shaun Barnes was switched to centre half-back to control Ben Damschke, but the former Elder-Berwick medallist was too quick for his taller opponent.

Morwell East lacked firepower and the defence of Yarragon stood tight, giving the East very little to play with.

David Bates at full-back was at his best clearing the ball when it did get into the Morwell East attacking zone.

When the half-time siren rang Yarragon was in its best position for years, 67 points ahead, and Morwell East supporters were shaking their heads in disbelief.

A stirring address by Morwell East coach Paul Henry had the desired effect after the break as the Hawks fought back.

Ben Marks found plenty of space around the goals and he notched up a few to make the game interesting.

The defence tightened with Harleigh Aarons and Dylan Field getting the ball out of the hot zone.

By three-quarter-time Morwell East was back within 44 points and looking better.

Yarragon had slowed down and there were a few danger signs at the start of the last term when Marks upped the ante with two quick goals for the East.

However the Panthers pulled together and tightened with Dylan Blythe and Mitch Jolly scoring again.

Yarragon winger Devin Pollock came under notice, as did Damschke, who produced his best game for the season.

NEWBOROUGH retained top position with a 71 point win over Thorpdale.

The Doggies were never at any stage stretched by the Dales.

Newborough was well led by coach Glenn Michie, who finished with a seven goal bag, his best return to date.

A six goal second quarter was the spark Newborough needed as it raced to a 10 goal lead by half-time.

While Michie was kicking goals up forward, defenders Tony Battista and Darryl Disisto kept Thorpdale out at the other end.

Lachlan Fanning was also having a field day with six majors, and along with Michie scored 13 of the side’s 18 goals.

For Newborough, Michie was voted as best along with Tom Wilson who started off interchange.

BOOLARRA continued on its winning way with an eight goal triumph over Yallourn Yallourn North, making it six on the run.

At half-time there was little in the game with neither dominating; Boolarra led by 16 points in a low key effort.

After the break Boolarra was more settled and, using the big George Bates Reserve to good advantage, rattled on 6.1 (37) to establish a commanding lead by the three-quarter-time break.

As it has been for the past few weeks Boolarra had a reliable target up forward.

Jesse Giardina did not let them down with another impressive haul of six goals, and now leads the competition by three majors.

The Demons eventually ran out winners 16.6 (102) to 8.7 (55). Nick Hider, back into the side after work commitments, showed his class with a best on ground effort, but it was difficult to choose between him, Anthony Thorpe, Courtney Sherriff and Daniel Metcalfe.

The Bombers finished the first half of the season on the bottom end of the ladder.

IN another boilover, fourth-placed Trafalgar knocked off the reigning premier Mirboo North in a tight game that produced only nine goals.

Conditions were cold and wet and a pre-match storm set the scene for sloppy football.

Trafalgar was out of the blocks early and ran rings around the Tigers in a real slog.

Three goals to nil in the Bloods’ favour for the opening term forewarned what was to come in a match Trafalgar needed to win.

Keeping Mirboo North to five behinds for a half of football had statisticians reaching for the record books, while Trafalgar had 4.5 (29).

Mirboo North continued to struggle; even with more shots at goal they could only manage a further 1.4 (10).

For Trafalgar Dylan Farrell, doing the heavy work, played his best, the pacey pair of Jace Butler and Jamie Hines were ever present while Tyson Leys gave a good account of himself in the ruck, and was the only multiple goal scorer with two.

For Mirboo North it was a forgetful day with Tim Traill taking out the award.

Other triers were Josh Taylor, Jacob Nash and Damien Turner.

YINNAR came back to life this week to beat Hill End by 70 points in a good hit out for the Magpies.

Conditions were for the brave-hearted as the chilly wind removed the prospect of flashy football.

Hill End had no counter with Liam Visser, James Dowling, Brendan Chapman and Damien Yates getting in as best while Cam Harwood booted four goals.

Hill End’s misery continued and it could only score two goals, both coming from Matt Mosley, their most consistent forward so far.