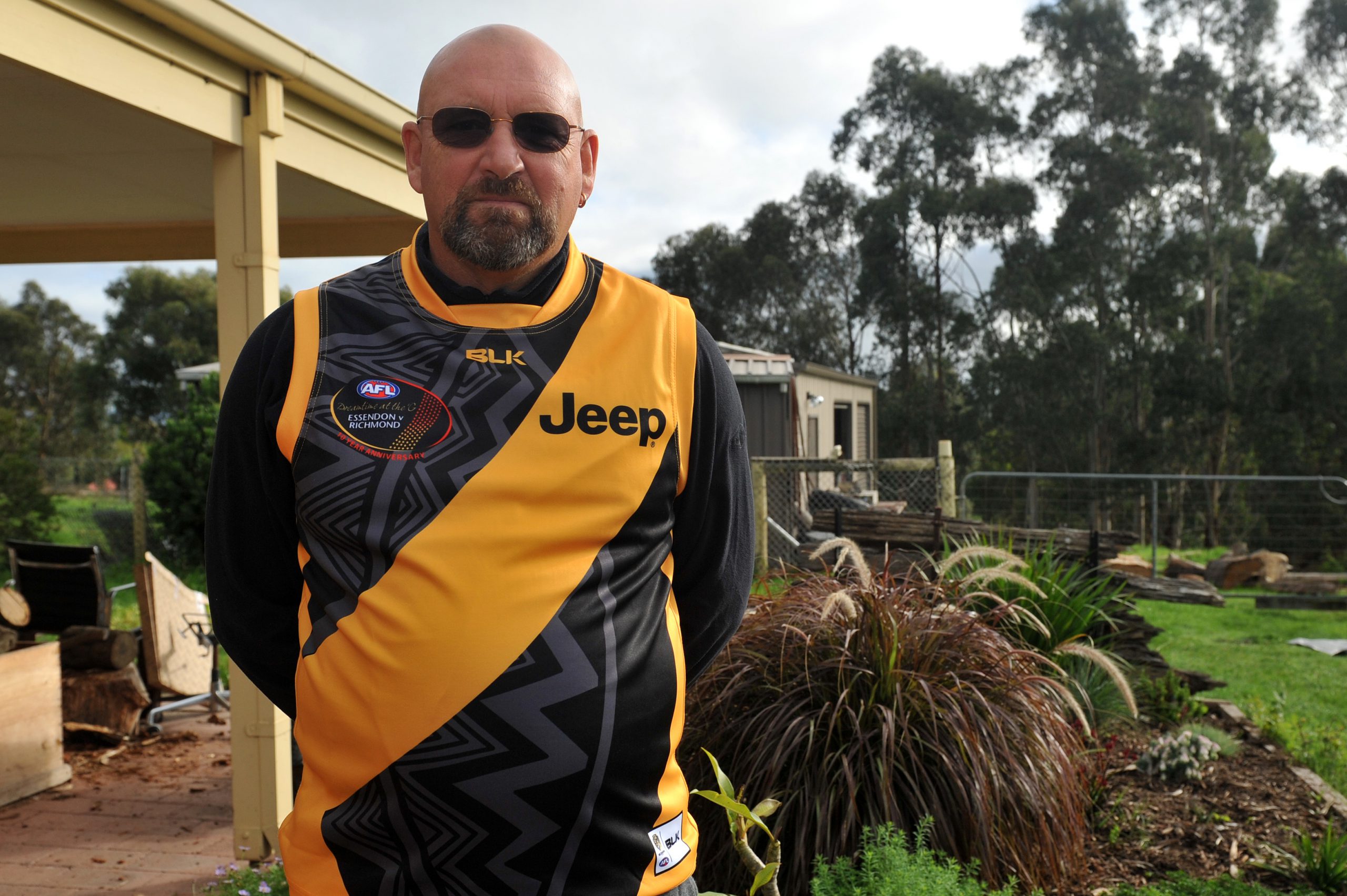 CHURCHILL 200-gamer Mick Harding’s dream of playing in the Australian Football League was never fully recognised, but he enjoyed the next best thing last month.

The indigenous artist and sculptor of 15 years designed the guernsey worn by Richmond in this year’s Dreamtime at the ‘G match against Essendon for the 10th anniversary of the celebratory concept.

Selected from a host of submissions, Harding’s winning design featured a shield on the front and back, representing the tenacity and struggles of indigenous men and women of the past.

In particular it recognises the history and hardships of those from his own Taungwurrung faction of the Kulin Nation.

“It’s to represent all those generations of men and women that came before us that have been protectors of our families, and it represents the leaders of the future,” Harding said.

“There’s been over 2000 generations of our people that have lived in this place; the theme this year was recognise, so I used that as a form of recognition as much as anything.”

A keen Collingwood supporter, the 53 year-old donned the yellow and black for the contest, and while the Tigers lost on the day, his guernsey was a winner by all accounts.

When asked about the emotion of seeing his work on display at the pinnacle of his beloved sport, Harding’s face lit up.

“I always had a dream of playing AFL football as most kids do when they’re little, but then when you see people running around with your guernsey on, I thought ‘if that’s as good as it gets for me I can take that’,” he said.

“I was pretty rapt.”

Harding was also commissioned to design a pin – a bunjil, or wedgetailed eagle – and a special Richmond football, which was auctioned off alongside its Essendon equivalent on the day.

As a keen cultural heritage ambassador, who sits on the Victorian Aboriginal Heritage Council, Native Title Services Victoria board and his own Taungwurrung Clans Aboriginal Corporation, Harding was thrilled the proceeds went back to the indigenous community.

All funds raised through the initiative go to the Korin Gamadji Institute, to help develop the next generation of indigenous leaders.

“It’s fantastic to know that not only you win a competition, to put your artwork on an AFL jumper for the indigenous round, but the proceeds go back to Korin Gamadji (Institute), and going back into our young people and supporting those young people to live their dreams,” he said.

Harding utilises line marking as opposed to dots for his work, a trait synonymous with south-eastern Victoria, and creates a variety of aboriginal artworks and artefacts from his home studio.

Fostering a talent he nurtured as a child, copying the funnies from the newspaper, Harding is now studying a masters of fine art at Federation University.

“My observations and conversations and all those different places I’ve been over 15 or more years have probably informed how I draw my art. It’s not dots, and that’s very much a Victorian indigenous trait when you talk about traditional mark making,” he said.

Despite the excitement of the Richmond experience, Harding said it would take a lot more to inspire a change of allegiance from the Pies.

“You’re probably going to have to do a full skin graft, blood transfusions, organ transplants… we might even have to change the DNA,” he said.

“But on the day and on the night I was supporting Richmond.”

Dreamtime at the ‘G merchandise, including Harding’s work, is still available at www.richmondfc.com.au

To view more of Harding’s work visit his website www.ngargawarendj.com