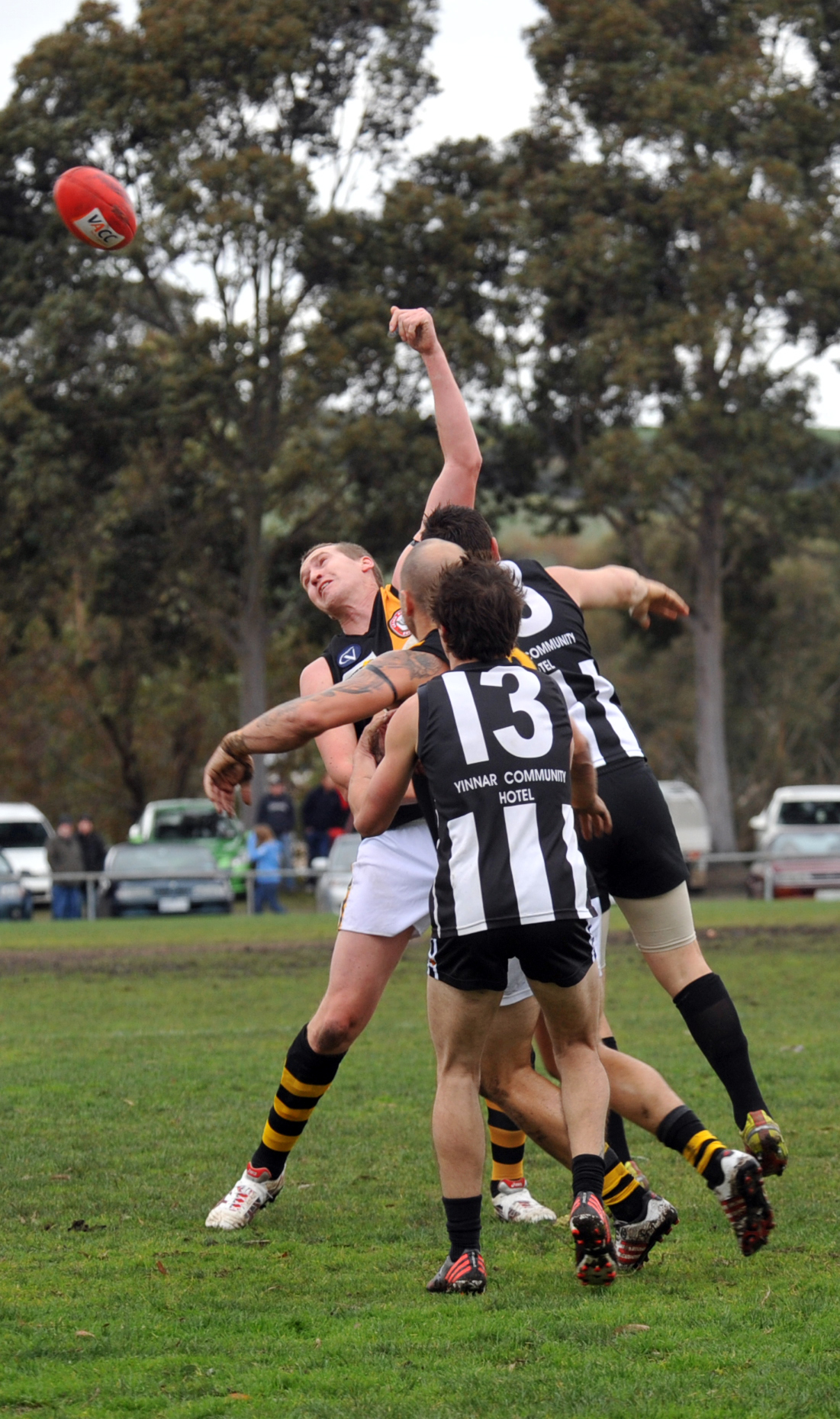 TWO matches highlight the penultimate round of Mid Gippsland football with the top four teams set to lock horns.

With finals just around the corner these matches may give an indication of flag favouritism.

NEWBOROUGH regained top spot after last week’s hang-on win over Yinnar but will have no respite against Trafalgar.

The Dogs will throw everything at the Bloods in a bid to cling on to first for another two weeks and gain a week’s rest during the finals.

In their last meeting Newborough got over the line by eight points but an inaccurate 7.17 (59) kept Trafalgar within reach.

The Dogs always start well, kicking long and straight towards goal, the effectiveness of which could determine the outcome of this one.

Against Yinnar last week Newborough began well but lost its way mid-game to let the Pies back in.

Trafalgar’s form has been patchy and its effort against Yinnar a fortnight ago was borderline pathetic for a top four side.

Newborough should win and retain top spot, but expect a slog on a soggy Trafalgar wicket.

THE spotlight will be on Yinnar this week against Mirboo North, with last year’s premier out to continue a run of good form over the Magpies.

Last meeting saw a five point ball game play out with the Tigers just in front at the final siren.

Yinnar went down to Newborough last week after a gallant fight back fell just short.

Mirboo North has enjoyed a run of easier games, amassing a good percentage, but can expect stiff opposition this weekend.

Goal kicking will be the important item in the match as both sides boast recognised full-forwards capable of tearing defences to ribbons.

Delivery from midfield will be key in a game where the four points are as crucial as ever.

BOOLARRA is in a state of shock after being well beaten by out-of-the-five Yarragon last week.

An eight goal first quarter onslaught from Yarragon caught Boolarra napping and it was too much of a start to recoup.

Morwell East has not had the season it was expecting and turned in some dismal efforts during the year.

Boolarra knows it will be in the finals and should finish fifth, playing off in the elimination final, possibly against Mirboo North.

The Demons should be near full strength for this important clash; last time they gave Morwell East a bit of a touch up and should continue in that vein.

Can Yarragon win two in a row at the expense of Thorpdale?

Last time out it was a decisive win to the Blues but since then Yarragon has shown marked improvement and a good win over Boolarra last week was its crowning achievement of the year.

Thorpdale has had a mediocre season and with two to go will be aiming to finish an inglorious year on a high.

Yarragon can take heart that its season has been better in the latter stages and its junior development is beginning to pay dividends.

THIS match is likely Yallourn Yallourn North’s last chance for a second win in 2014.

Hill End has fallen short of expectations and will be vying to win its last home match and salvage something from the season.

YYN has an exciting core of young players gearing up to senior level and the future looks bright if it can keep other clubs from poaching its budding stars.

Hill End had a win over YYN in their previous encounter and should do the same on Saturday.