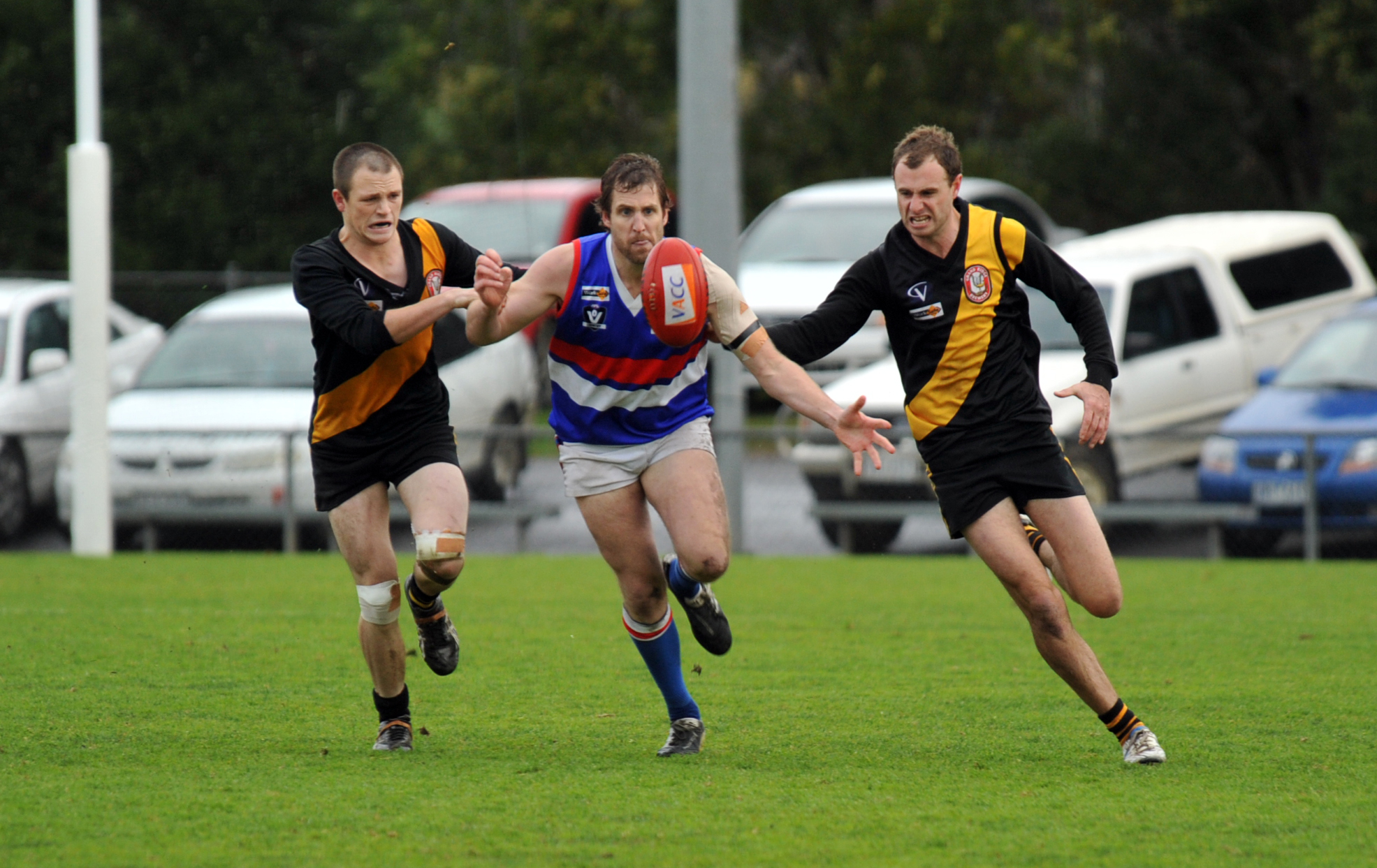 NEWBOROUGH and Mirboo North will face off in the Mid Gippsland Football League grand final for the second successive year, and second time in league history.

It will be Newborough’s third consecutive attempt at a premiership flag, having gone down in the last two attempts to Trafalgar and Mirboo North. Newborough has looked the goods so far, and its only appearance in this season’s finals saw a demolition of Mirboo North in the second semi-final two weeks ago.

Whether Mirboo North can bounce back after that hiding is yet to be determined, but coach Troy Hamilton said the side could garner confidence from last week’s victory over Boolarra.

“After two weeks ago we weren’t sure where we were at and whether we’d be getting to this day, but we’re just excited to get another crack at it, get another two hours of footy to see if we can win it,” Hamilton said.

“It’s been a strange year… probably continuing on through the finals. We’ve had a lot of players missing and playing more roles through the year, sometimes through work, others through injury, so it’s been a different year where we’ve used lots of players.”

The Tigers know it is going to be a battle of the strongest, but history is against them as Newborough has enjoyed three strong wins in their bouts over Mirboo North this season.

Mirboo North was on fire in the regular season with 1811 points, averaging 100.61 per game while Newborough has been more subdued with 1697 points at 94.27 per game.

Newborough’s highest score this season was 24.18 (162) against Mirboo North the opening round “wedding-gate” match and, which it matches in its final home and away game against Thorpdale.

The big incentive for Newborough is having four teams in the grand final across the grades, but the all important seniors title has eluded the club for 11 years (2003), which was their ninth overall.

Newborough is basically a home-grown squad with Stuart Robertson the only outsider.

Coach Glenn Michie is a former player who returned this year to coach the Dogs and what a transformation he has brought to the kennel, taking out the minor premiership and now facing up to the grand final.

“If you are going to work hard you get what you deserve; at the moment finishing on top and getting a grand final spot is reward for effort, but I suppose we’ll only be judged on whether we can win it this weekend as well,” Michie said.

The playing-coach said the midfield was the key battleground, and shutting down supply to the league’s top goal kicker.

None of the current crop of players except Darryl Disisto played in their last premiership side so the feeling of elation would be new to most of the team. Mirboo North has a few new faces that were not present last year but this time the Tigers will be the underdogs, coming from third to make the grand final.

Both sides should be essentially full strength for the final, with few injury troubles in either camp.

Many of the Mirboo North squad have been around for quite a while and this could be their last hurrah.

Players such as Kris Berchtold, Drew Gardiner, Tim Traill, Simon Busittil and Shane Peters have been with the club for over a decade and if they can capture the premiership again it might prove a fitting climax to many careers.

BULLDOGS coach Glenn Michie has turned to the history books in search of an answer to the club’s recent grand final woes.

Having dropped the last two deciders on the run, Michie contacted the coach who addressed the same problem in the 1999, Craig Skinner, who broke through for a premiership after consecutive runner-up efforts.

As a new club coach, Michie said he does not have the “hangover” from the past two years of September heartache.

“I’ve sort of come in and just worried about 2014 and that’s been my focus the whole time. I’m sure there are some people around the club who have one eye on the past but for me it’s about making sure we get this year done right,” he said.

Michie said his focus had been on hard work and honesty to the group, with a throwback to past club culture.

“Being a Newborough person originally I know the values of the club and what has got them success in the past. It’s been a step forward in terms of professionalism but almost a step back to the values of years gone by.”

The potent playing-coach said shutting down the Tigers’ midfield, running backs and attacking weapon Tim Traill, would be key to victory this weekend.

“We don’t have to fight for the underdog tag… but we showed on Saturday that our good footy is still right up there, so hopefully we can bring that,” Hamilton said.

The Tigers have finals experience in spades, with about 18 of the current crop played in last year’s premiership, along with several from the winning 2006/07 group, which Hamilton believes could play a part in the result.

However, he said the midfield must improve from the previous encounter two weeks ago, which Newborough won by 90 points.

Hamilton said whichever forward line receives the best delivery will be crucial, and the form of Tigers’ spearhead Tim Traill.

“It’s hugely important but I think Timmy turns up to play most weeks, his day will be reflected on whether our midfield can get the ball down there and I think (Newborough coach Glenn) Michie is the same,” he said.

The nine-time league leading goalkicker is instrumental in keeping the scoreboard ticking over, and also has the ability to play upfield when required.

A strong mark and accuracy is his dominant feature.

Gutsy rover type who is not afraid of mixing it with bigger players.

Is a reliable scorer and brings other players into the game.

A much under-rated player but pops up each week in the best list, a strong no-nonsense type who can play either in attack or defence.

Leading by example he came second in the league goalkicking but was not a recognised full-forward.

A dangerous player to tag and will be hard to hold down.

A strong player who has been brilliant this season, also a hard man to beat and the Dogs will be looking at him to shine again.

A good recruit this season who has had a great season, culminating in the league best and fairest award.

A hard player to pin down and will give the Bulldogs plenty of drive from the packs.

UNDEFEATED Mirboo North enters this weekend’s grand final against Boolarra as the hottest of favourites to take the Mid Gippsland netball flag at Morwell East.

The Tigeresses romped through the regular season with 18 straight wins, and overcame this weekend’s opponent 46-41 in their semi-final meeting two weeks ago.

Regular season runners-up Boolarra felled Yinnar twice through the finals series to reach the decider and should be equipped to match it with the league’s most imposing outfit.

The Tigers have best and fairest player Alice Pratt in the line-up and she will be a big advantage.

All finals to be played at Morwell East, Ronald Reserve.

Under 15 Newborough v Morwell East 8.30am