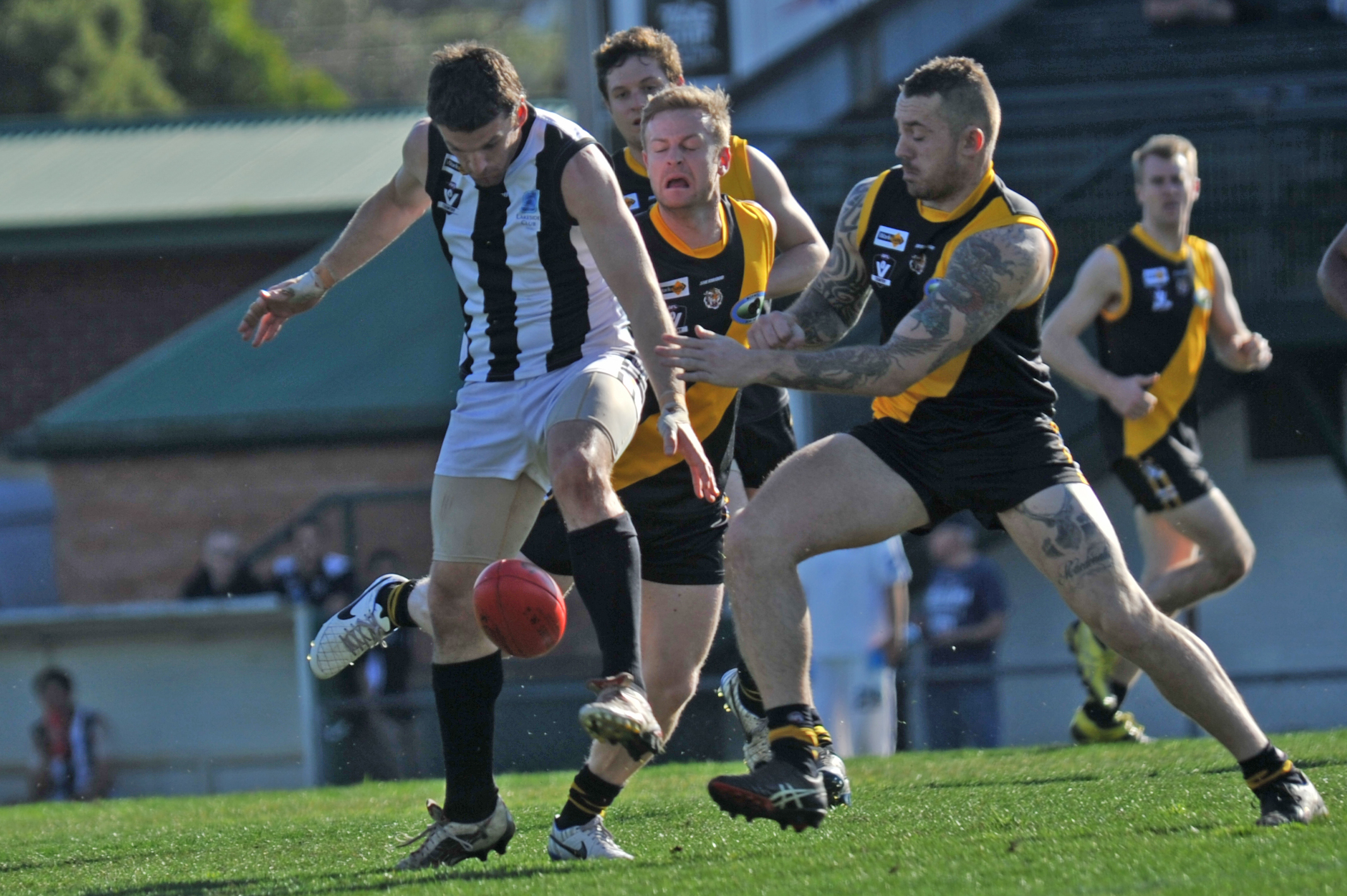 REIGNING premier Morwell is the first team into this year’s Gippsland League grand final, after seeing off Sale in a pulsating second semi-final at Traralgon Recreation Reserve on Saturday.

The Tigers were in complete control to half-time, but the Magpies broke the game open with a six-goal-to-none third term to lead by five points at the last change.

Morwell coach Harmit Singh successfully rallied his troops, who responded by keeping Sale scoreless in an outstanding, if slightly wasteful, final term to win 11.18 (84) to 10.4 (64).

Rubbing salt into Sale’s wound were shoulder and hamstring injuries to star Jason Gram, which could rule him out of the rest of the finals series.

Singh said the third-quarter slump was a concern, but his side would take plenty of confidence in the premiership decider as they close in on back-to-back flags.

“We were good for three quarters, but they’re a quality side and in the third quarter we went away from a few things and (Sale) got a run on,” Singh said.

“We weren’t able to get our hands on the footy, Sale got on top at the stoppages and we gave up some easy inside-50s.

“The positive is we got ourselves going and it’s fantastic to get in (to a grand final) and have another crack.”

Ash Close finished with three goals and played arguably his best game since round 10, impacting the contest up forward and in the ruck.

Once again Morwell was able to kick a winning score with limited contribution from its key forwards, owing to wealth of small forward and creative midfield types.

Sale’s resurgence was led by Kane Martin, Justin McLay and Jordan Dessent, but the Magpies had few winners over the course of the game.

The latter sustained a shoulder injury and had it strapped up, only to suffer a hamstring strain on his return in the final term.

The Magpies were still without John Gooch, Mitch Davis and Luke Collins and will be sweating on the fitness of their injured quartet ahead of Sunday’s preliminary final date with Wonthaggi.

WONTHAGGI sent Maffra tumbling out of the finals series, with a 41-point victory at Morwell Recreation Reserve yesterday.

The Power led at every change and produced a suffocating second half display to complete a season clean sweep against the Eagles – home, away and in finals – with a 13.10 (88) to 6.11 (47) win.

In a clash of styles, Wonthaggi’s speed caused Maffra problems at both ends of the ground.

The Eagles had plenty of possession, but spent much of the second half pinned back, as they tried in vain to work the ball by hand through Wonthaggi’s defensive forward structure, led by energetic trio Nathan Jones (four goals), Aaron Ware and Jack Blair.

Despite their territorial advantage and dominance of the inside-50 count, the Power only managed two goals in the third term, leaving the door just ajar for a Maffra fightback.

However, a three-goal burst midway through the final term slammed the door shut and booked the Power a preliminary final berth.

Alex Carr, who was a late inclusion along with Daniel Bedggood and Brent Connolly, battled gamely for the Eagles, while Joel Lambourn and Kelvin Porter were also prominent.

Full-forward Darren Sheen finished with four goals, but was well-held for the most part by in-form Power defender Chris Wylie.

Wonthaggi and Sale will battle it out at Moe’s Ted Summerton Reserve on Sunday for the right to meet to Morwell in the grand final.