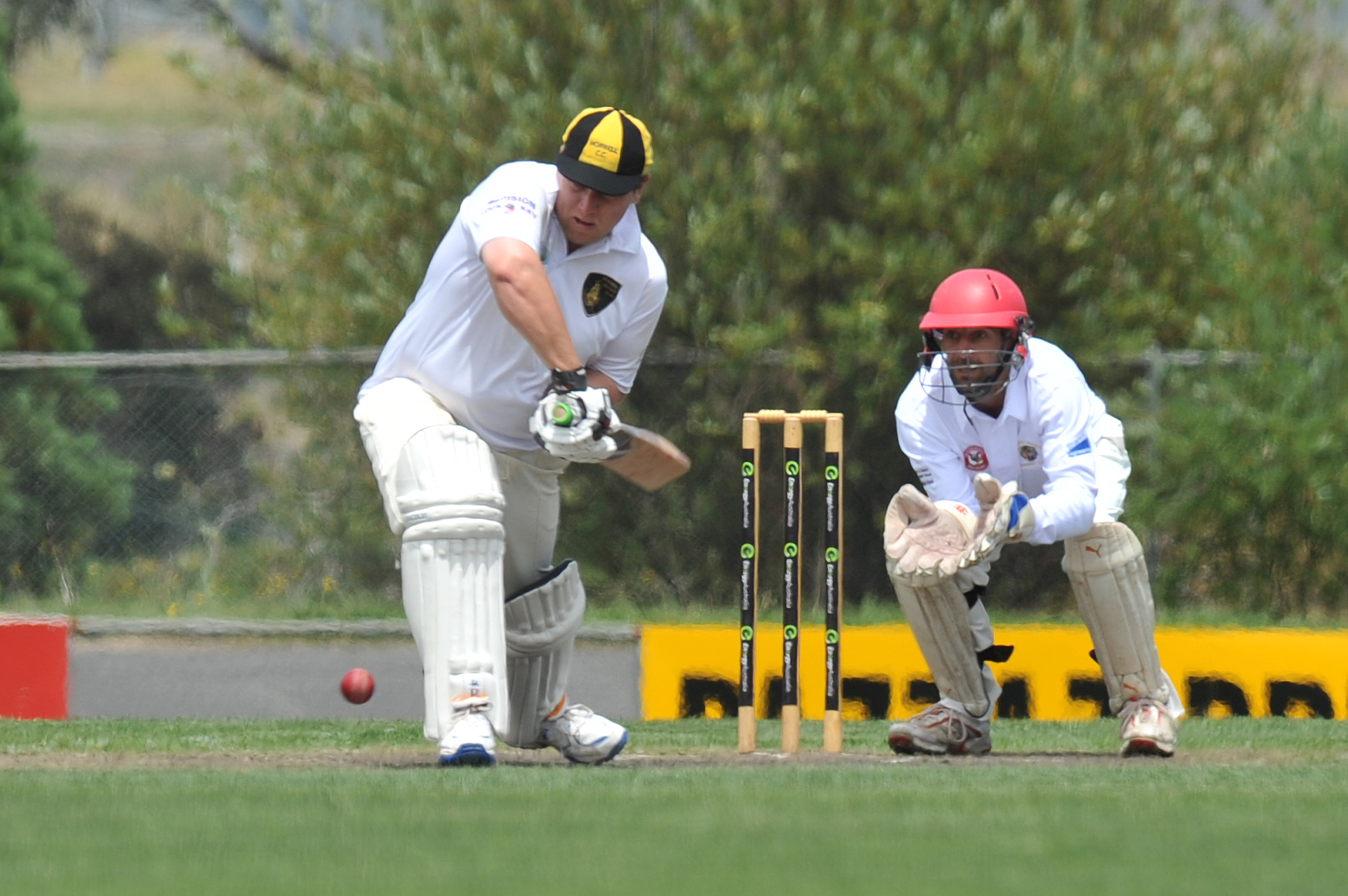 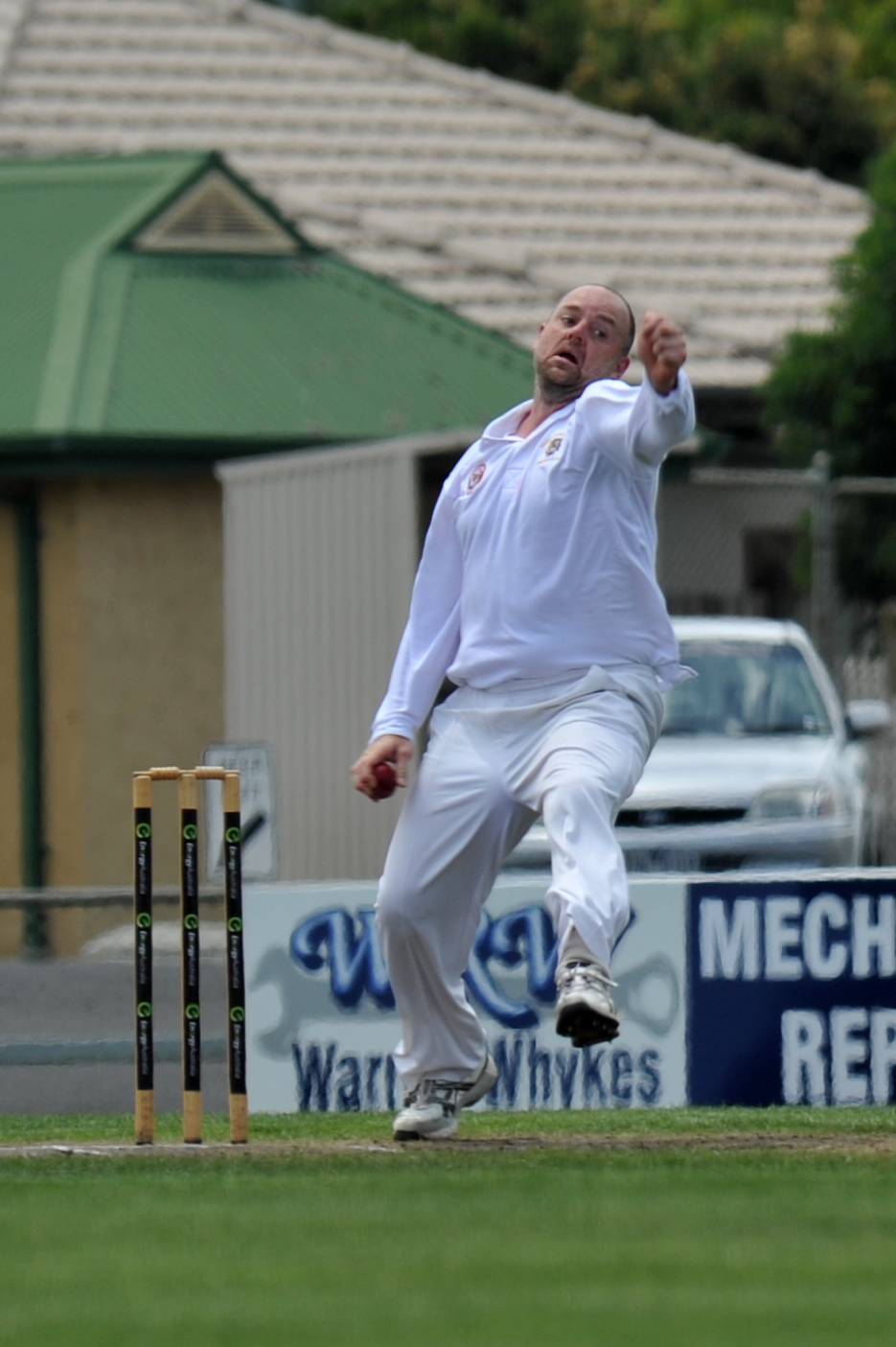 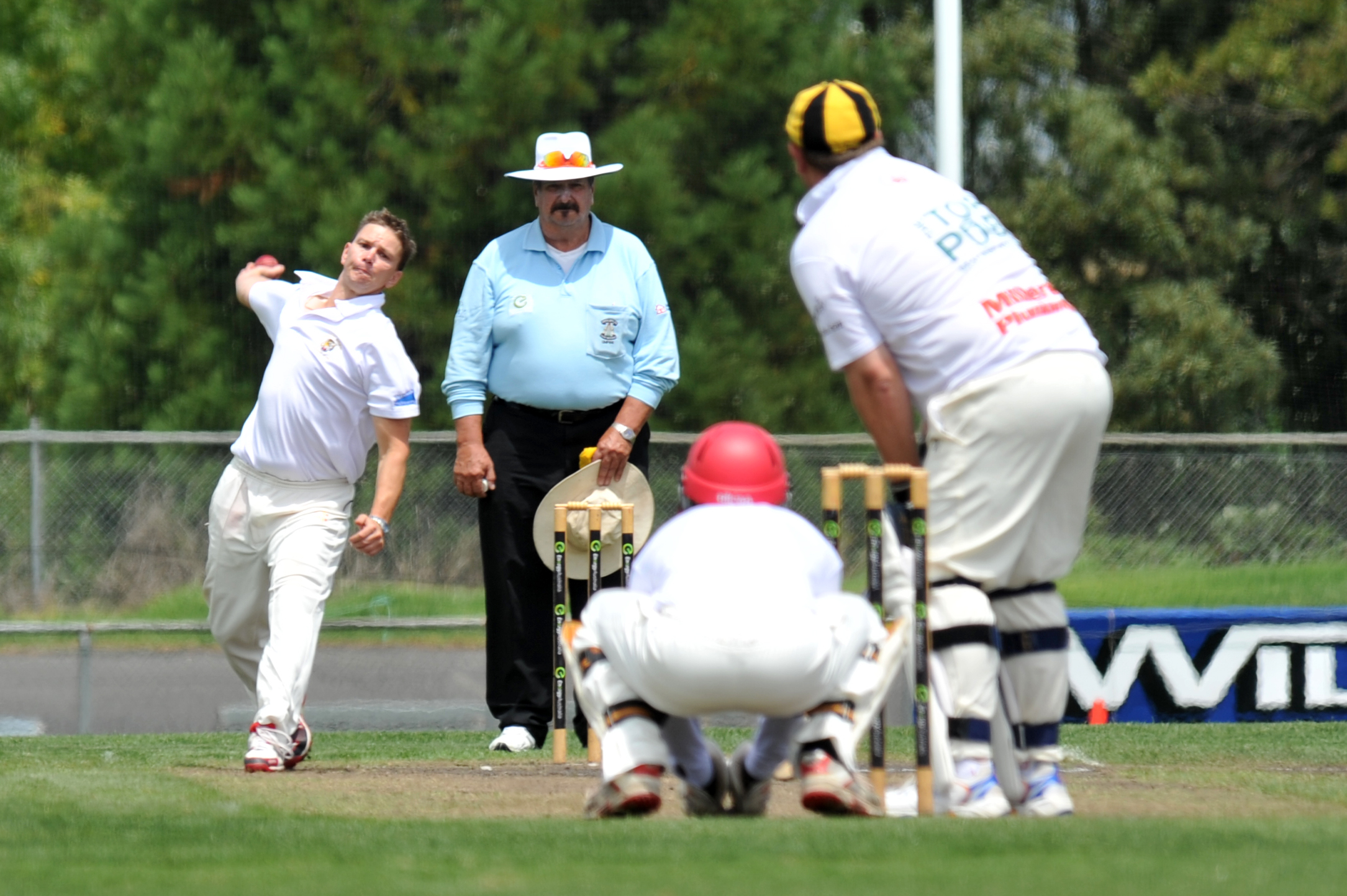 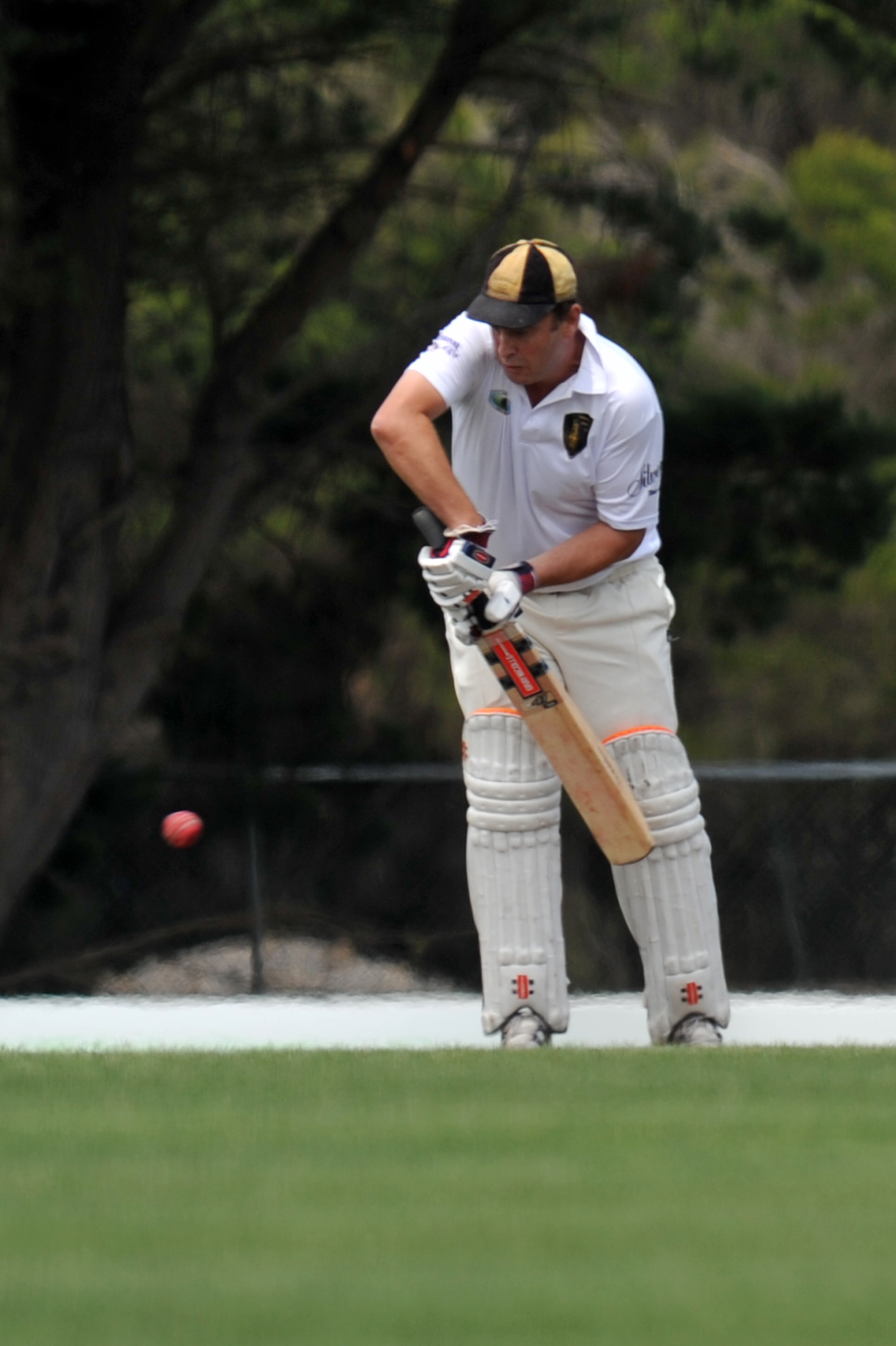 MORWELL had Mirboo North on the ropes in their Energy Australia Cup clash, with the home side in cruise control at 3/82, needing just 76 runs to secure a straightforward victory over the ladder leaders.

Craig Giddens had made another start continuing his remarkably consistent season, while Mark Cukier looked assured and ready to guide the chase to its conclusion.

But when Josh Taylor had Morwell’s captain-coach Davin Charleston lbw for nine, Mirboo North found itself back in the game.

The visitors restricted the opposition’s scoring shots with disciplined bowling and were backed up in the field by some outstanding efforts.

Mirboo North skipper Rob Phoenix led from the front, wheeling down 24 overs to claim 5/30, dismissing all of the last four batsmen in tandem with Jarrod Speed (2/12).

Their irritating accuracy tied the batsmen down and when Brendan Brincat was stumped off Phoenix for no score the fight went out of the chase as the home side lost 7/40 to crash to 122 all out.

With 20 overs left in the match, Mirboo North batted again only to stumble to 7/75.

Peter Grima’s 35* and Shane Peters’ 28 were the only double figure scores, as Brincat (2/16) exploited the tricky surface and former wicketkeeper Jesse Giardina delivered the final over to snag 2/6, including the wicket of Phoenix for a duck.

LATROBE posted the fifth-highest Energy Australia Cup total of all-time, and a club record score of 7/486.

The total was masterminded by a supreme 150 from coach Kaushik Aphale and maiden first-grade half-centuries to Steven Freshwater and tailender Brendan Evans.

Yallourn North conceded the game early with Aphale and Matt Brewer extending their partnership to 102 runs before Brewer was clean bowled by Rowan Kelly.

Daniel Siddle followed but veteran Tim Cranwell (47) ended any hopes the Bombers’ attack had of inducing a collapse by posting a 121 run stand with Aphale.

Kelly picked up the wicket of the Sharks’ coach before Will Lawrey got rid of Jamie Brierley, and when Cranwell became Kelly’s third wicket of the innings it seemed the end was in sight. Freshwater and Evans had other ideas however, adding a 112-run partnership for the seventh wicket.

The Bombers’ weary afternoon was summed up in one stroke when regular number 10 Evans launched Josh Keyhoe over the ropes to bring up his 50.

Youngster Will Kennedy also managed a few runs before the close as Latrobe was finally sated after 111 overs of carnage.

Lawrey was Yallourn North’s best bowler with 3/58 but his other much more vaunted colleagues were unable to follow his lead.

Rowan Kelly (3/105) also got wickets but went at more than four runs per over, and Jeremy Butler failed to take a wicket going at 4.6 per over.

DAVID Bremner did not last long for Trafalgar on day two, removed by Jason Richardson without scoring.

That brought the big-hitting James Blaser to the crease at number 11, and together with Aiden George the duo recorded a last-wicket partnership of 68.

The stand was eventually ended by Shannon Pickering, who broke through George’s defence to finish the opener’s 86 run vigil.

Guiding the chase with a firm and steady hand, and battling his way out of trouble early, George finished with more runs than Thorpdale made in its first innings.

Blaser finished with a valuable 33, and left the Blues requiring 101 runs to make the hosts bat again.

The rearguard started poorly, with Kayne O’Connell, Ayden Kelly and Fraser Smith all removed by Bremner on his way to figures of 3/17, but the bulk of the damage was done by young Trafalgar legspinner Blair Clymo.

Blair, who was back in Trafalgar colours after representing Gippsland Pride during the week, had all five batsmen caught.

Four of his victims holed out in front of the wicket and one catch was taken by his father, Mark Wynne, to wrap up a fantastic innings win for the Ships.

STEVE Johnstone and Bailey Somerville did their best to keep Moe out in the field for as long as they could with 14 apiece, but Newborough was eventually all out for 96 chasing Moe’s 239.

Moe captain Andrew Philip enforced the follow on and when the resolute Leigh Colgrave was out to Nick Clarke, Moe sniffed an early victory.

But the Bulldogs showed enough fighting spirit to eat up most of the overs; Mark Whitney scored a fluent 59 at first-drop with support from John Murray (21) and his captain, Matt Coutts (24*). Newborough would rue the unavailability of Troy Oakley which meant nine wickets was enough to dismiss the home side for 151, thanks largely to young gun Joel Mitchell’s 4/13.

The Lions required just eight runs and it only took four balls for Nathan Lee to get there to secure an important outright victory that lifted Moe back into third place.

DERMOTT Leys smashed his third century of the season to lead Jeeralang-Boolarra to 5/209 against Trafalgar.

Cohen Lee’s 3/35 was the best bowling effort by any of the Ships.

Rhain Howarth-Ross then struck a fine 78 but quickly ran out of both overs and partners as Trafalgar closed at 9/161.

Brendan Rooney was the only bat to offer any resistance with a calm half-century.

St Vincents crashed to 75 all out against Morwell, with Tigers bowlers Brent Reside (4/21) and Michael Mooney (3/25) doing the damage.

Mooney then struck 46 at first-drop as Morwell eased past the target.