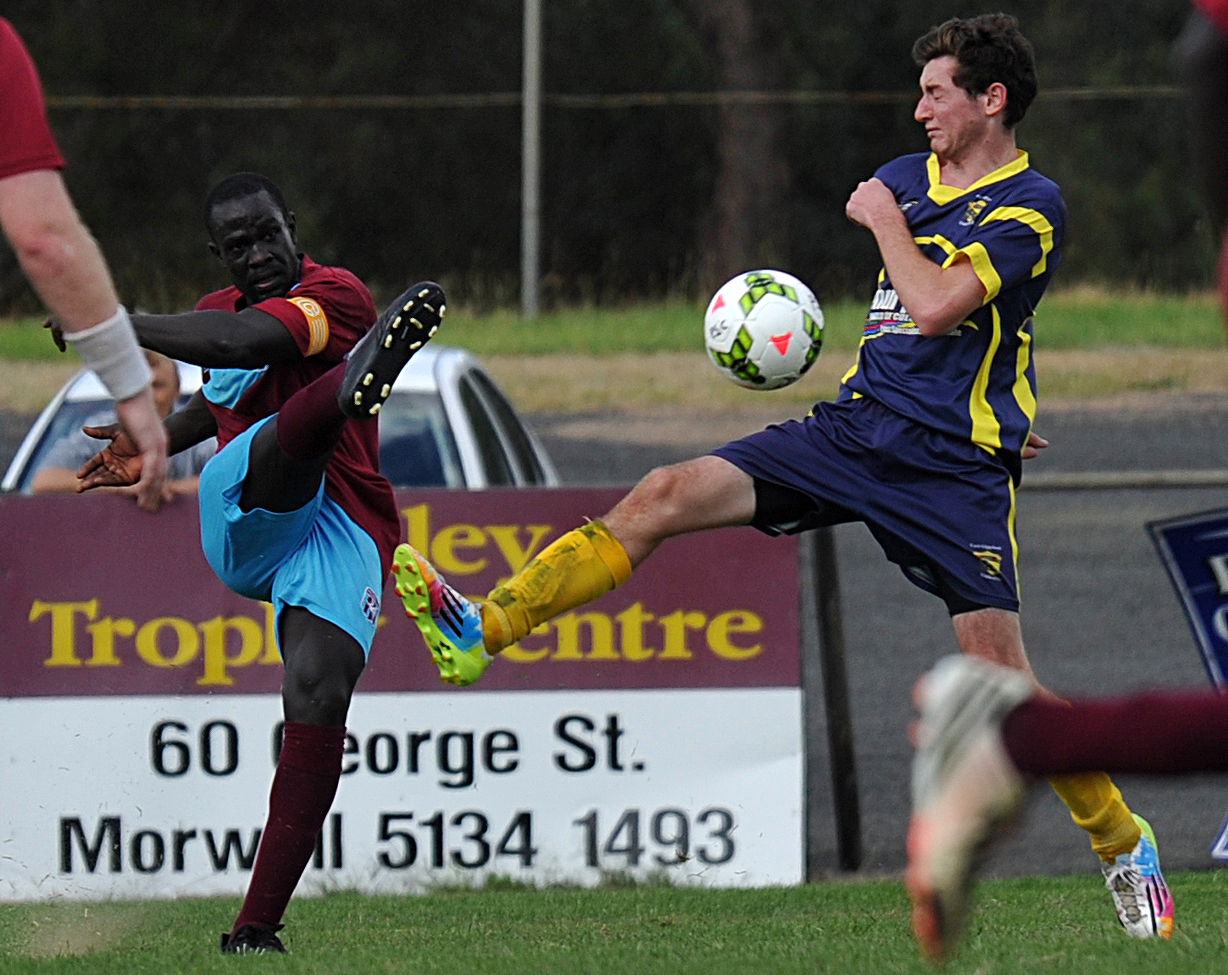 IT was a new look Churchill United that travelled to Monash for round one of the Gippsland Soccer League on Sunday, but a familiar result as the Rams accounted for the Wolves 4-2.

With an array of fresh faces for both teams making their senior debuts, the Rams settled first and Taylor Jackson forced 16 year-old ‘keeper Jamie Kent into a fine save early on.

The visitors soon took the lead from a corner when Paul Riess leaped highest to power his header into the net.

The advantage was doubled soon after, with Ray Myers ghosting in and prodding the ball home from a low cross into the box.

Monash clawed back into the game and reduced the deficit before the break.

Wally Noppert was fouled 20 yards from goal and Chad Shelley curled a sublime free kick into the bottom corner to make it 1-2 at half-time.

After the break the game adopted a more even feel as both teams created and squandered chances.

The Wolves drew level from the penalty spot when Noppert was again brought down and Shelley applied the finish. The stalemate lasted less than five minutes as Jackson breached the Monash rearguard and drove the ball into the bottom corner.

The result was sealed with 15 minutes remaining, in a near identical circumstance to the previous goal when Jackson again burst past the Monash defence to power home.

SUNDAY afternoon saw GSL central league debutant Trafalgar Victory travel to Falcons 2000 in a daunting task for the visiting side.

Any pre-match trepidation was proved justified by the final whistle, as the Birds posted a dominant 8-0 victory.

With a settled line up and a strong pre-season behind them, Falcons were off to a cracking start and opened the scoring early when coach Nick D’Alessandro provided a tidy finish inside the 18-yard box.

To its credit, Trafalgar continued to battle away but within the space of 10 minutes Jesse Kennedy and D’Alessandro put the home side 3-0 ahead before the break and it looked to be game over.

The onslaught continued in the second half as D’Alessandro and Kennedy completed their hatricks with Sam Amaira and Tom D’Alia rounding out the scoring in a convincing 8-0 victory.

This weekend Falcons make the trip to Bairnsdale to face the second central league debutant in East Gippsland United.

OLYMPIANS scored a last gasp penalty to hold Fortuna to a 1-1 draw in Traralgon.

There were few chances of note in lacklustre opening exchanges, but the visitor could have broken the deadlock in the 20th minute when Ivan Vekic came close with a chip from 20 yards. Aaron Daniels had a chance at the other end when a cross came in from the left only to be headed over the bar.

Fortuna soon opened the scoring when Robbie Custworth swung in a corner, Olympians failed to clear and Matt Ross punished them.

Despite getting the ball stuck under his feet 15 yards from goal, Ross recovered to bundle his shot into the back of the net.

The hosts grew into the game and poured forward but in the face of an experienced Fortuna defence found it hard to create clear chances.

With time drawing short for Olympians, Daniels was brought down in the box by Ross in the 89th minute, and Heydan Cook smashed the resultant penalty into the top corner to get a share of the points.

“The boys never gave up which is what we are trying to instil in them for the long season ahead.”

Olympians’ young defenders had a solid performance and look to be organised at the back.

A NEW season brought no respite for Tyers as Moe United hammered 13 unanswered goals past the Lightning at Olympic Park.

Tyers will hope the only way from here is up in the wake of the 13-0 scoreline, after conceding nine in the first 45 minutes.

The Swans led 3-0 by half-time and shared the goals among five individual scorers.

Ben Gillard scored a hat-trick for the young Bairnsdale based side, while Josh Perry chimed in with one.

EGUFC took a 1-0 lead early when Pegasus was caught napping at the back, before Alradi Ismail levelled the ledger at 1-1.

Ismail created several chances for himself in the final third but failed to convert, before EGUFC nabbed another two by the break.

The East Gippslanders absorbed early pressure in the second half before going 4-1 ahead, with Ismail’s second coming moments before the final whistle.