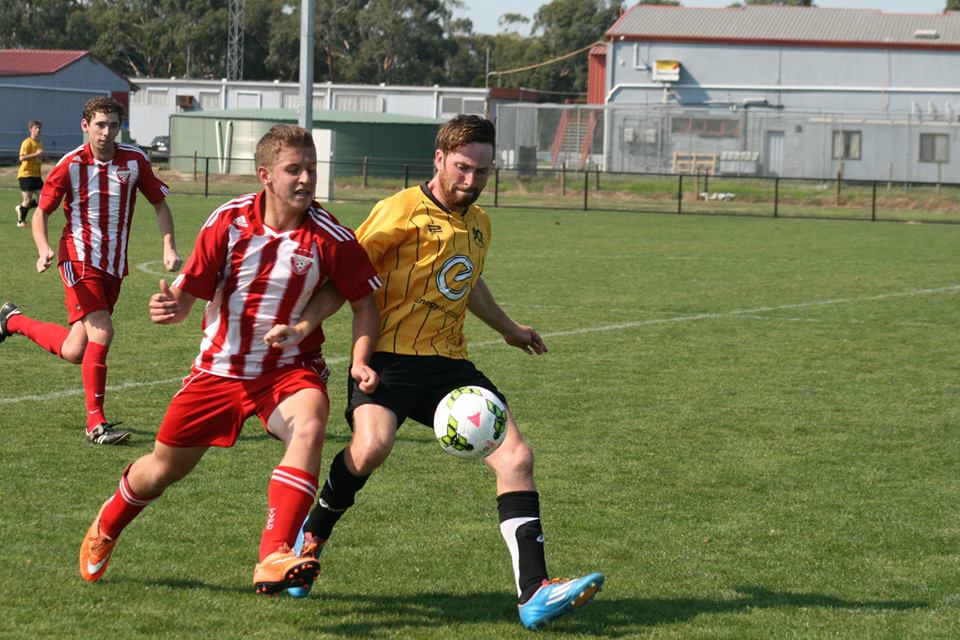 On a pristine pitch at Trafalgar Recreation Reserve the home side was up and about early, applying pressure on the young Monash team across the park.

Victory turned pressure into scoreboard dominance 15 minutes in when Sam Jones beat the offside trip to run through on-goal unopposed and score.

The lead was negated minutes before the break through a Brendan Ruddell-free kick, which the Monash captain powered home from 20 yards.

Monash came out a different team after the interval and former coach Wally Noppert gave his side the lead on 49 minutes with a rifling left foot strike from outside the box.

Four minutes later Noppert was again given space, this time firing home with his right foot.

The introduction of Ty Christy off the bench gave the Wolves an extra attacking threat and helped Ethan Lawrence extend the lead midway through the half.

It threatened to become a rout when Noppert crossed to Marcus Krznaric minutes later to make it 5-1.

Despite continued probing Monash was unable to add to the scoreline, though 16 year-old midfielder Chris Oulton saw a great effort denied which would have added gloss to his debut in midfield beside Chad Shelley.

Monash faces Moe this weekend for the Fred Gauci Trophy, played across all men’s divisions home and away.

The Wolves have held the trophy for the past five years.

SUNDAY afternoon saw East Gippsland United host its first game in the senior GSL central competition against a Falcons side brimming with confidence after their demolition job on Trafalgar the week prior.

Attempting to avoid their fellow debutant’s fate in round one, EGUFC was off to a bad start when transitional play between Tom D’Alia, Jesse Kennedy and Sam Amaira saw the latter tap home to give the visitors the lead.

A sumptuous free kick from Kennedy doubled the lead and further goals from Amaira and an own goal would put the result beyond doubt by half-time.

The second half saw no let up from Falcons as Amaira completed his hat-trick along with another own goal and a beautifully hit strike from Isaac Abas. EGUFC continued to grind away and was rewarded with a goal from a stunning free kick in the top corner by Jaydon Steele to give the home fans something to cheer about.

The result saw Falcons head to the top of the table on equal points with Moe and Sale prior to its next hit out against Newborough-Yallourn United at home before the Easter break.

GOALS to Ash Birrell and Sam Gatpan ended Churchill’s aspirations for another undefeated season, as the Red Devils won 2-0 at Hazelwood South Reserve.

Moe scored once in each half and kept a clean sheet to go equal top of the ladder.

THREE goals on either side of the interval saw Sale United hammer Fortuna 6-0 at Crinigan Road South Reserve.

Doubles to captain Ash Ross and Tommy Nguyen led the charge, with strikes from Jacob Patterson and Graham Young adding to the carnage.

COMING off a bye in round one, Newborough-Yallourn United won its first game of the season 1-0 over Morwell Pegasus.

Andrew Batt’s first half strike was enough to see off the Horsemen, who failed to capitalise on opportunities in front of goal.