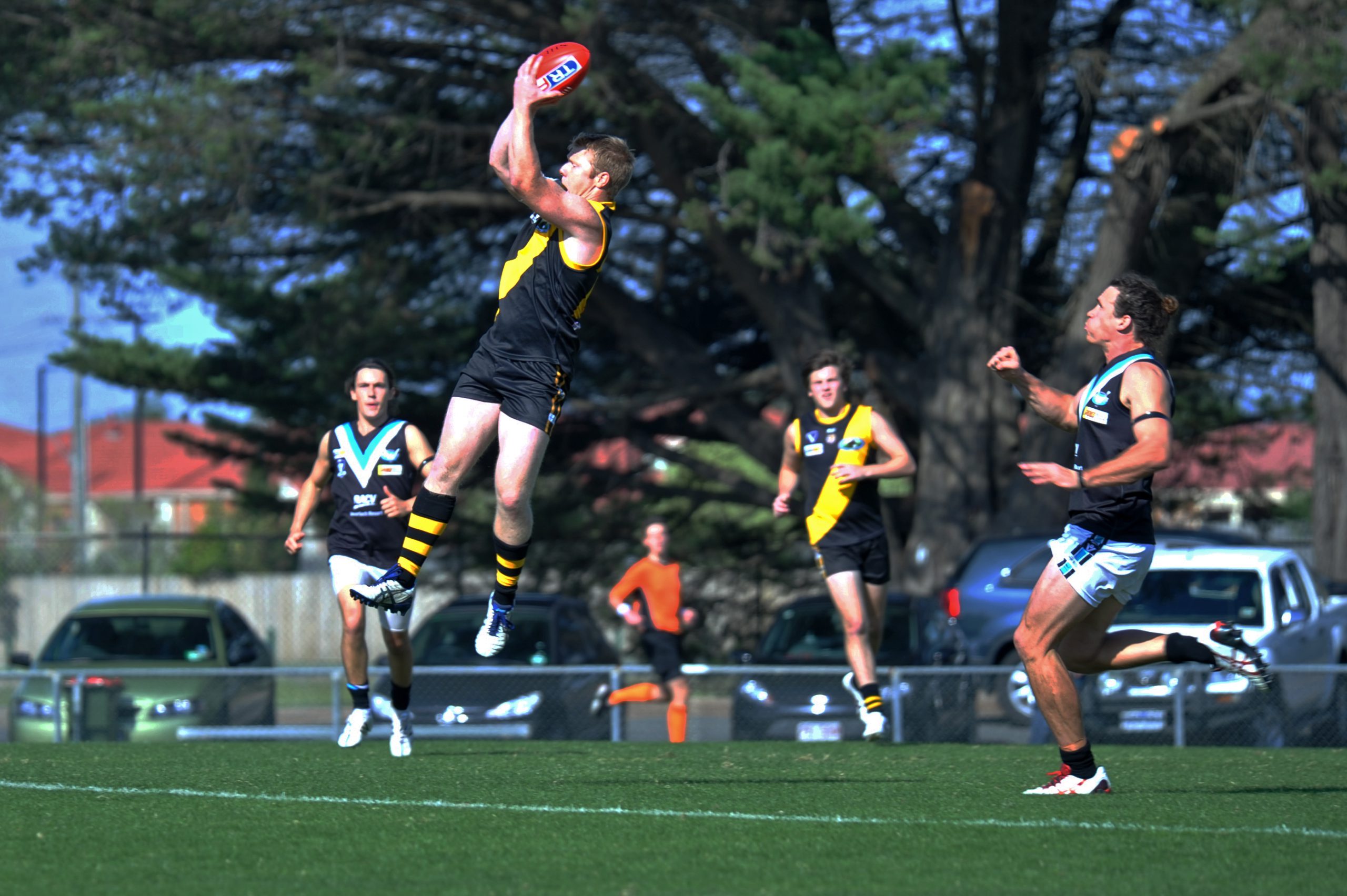 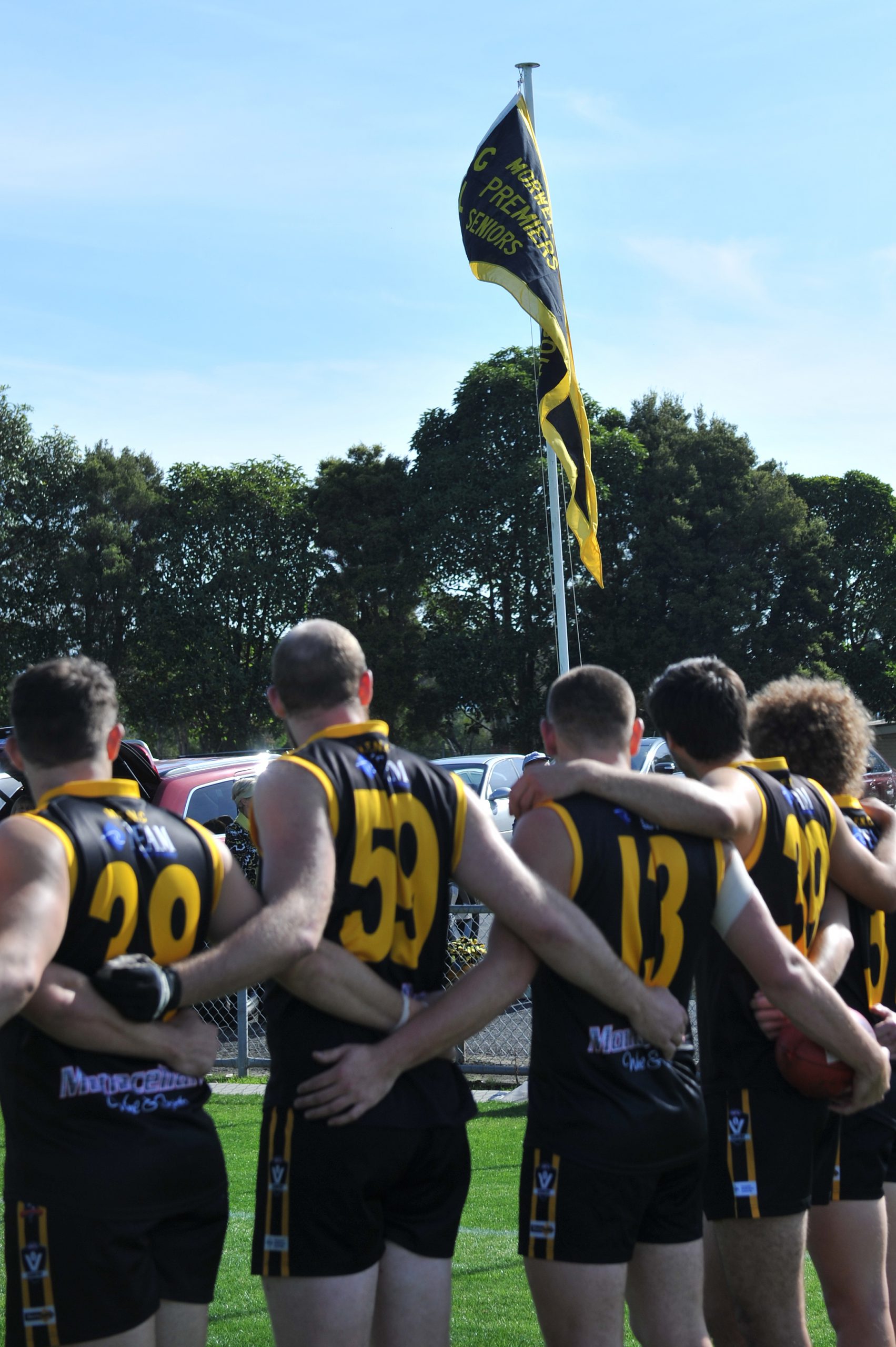 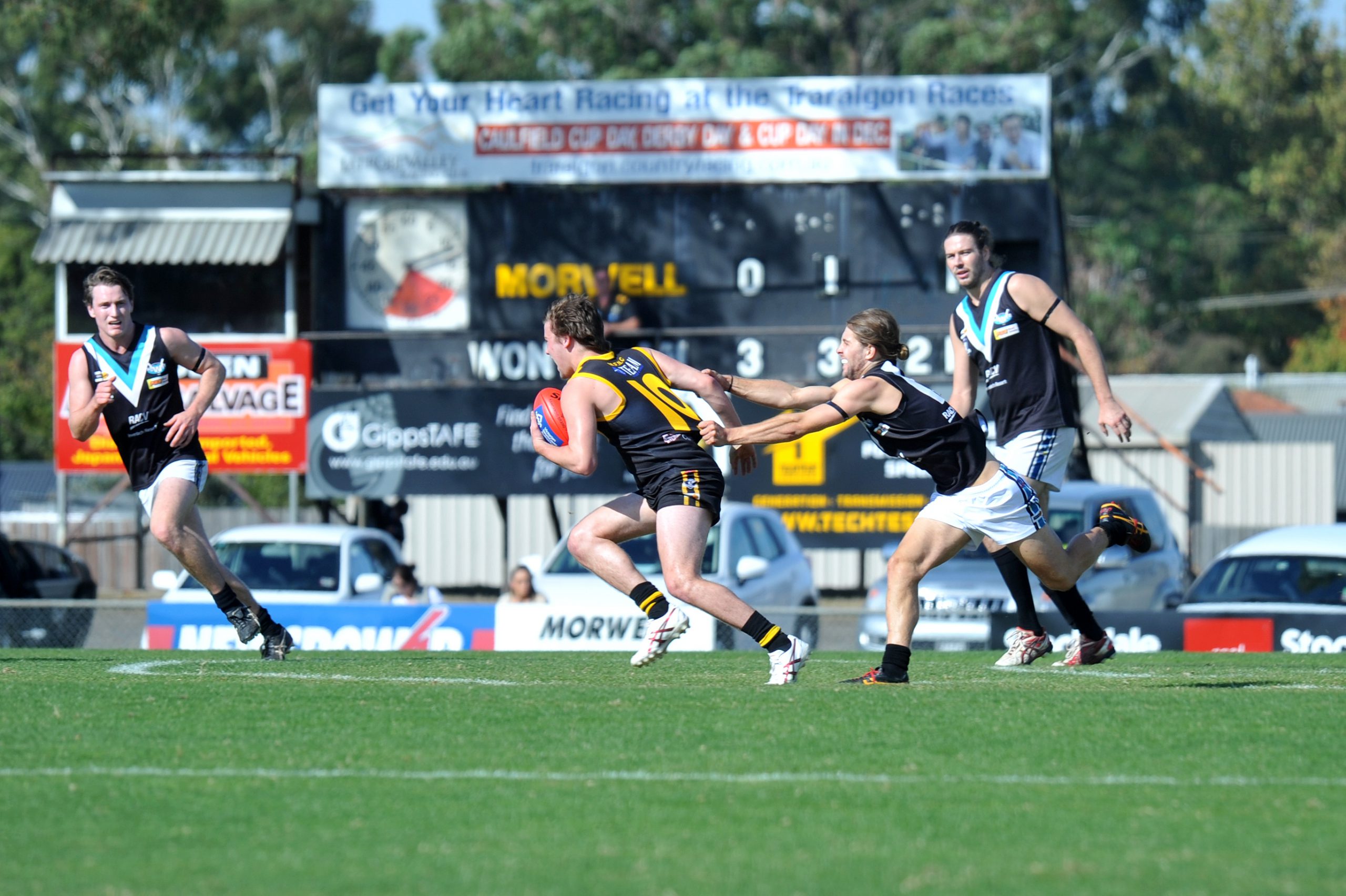 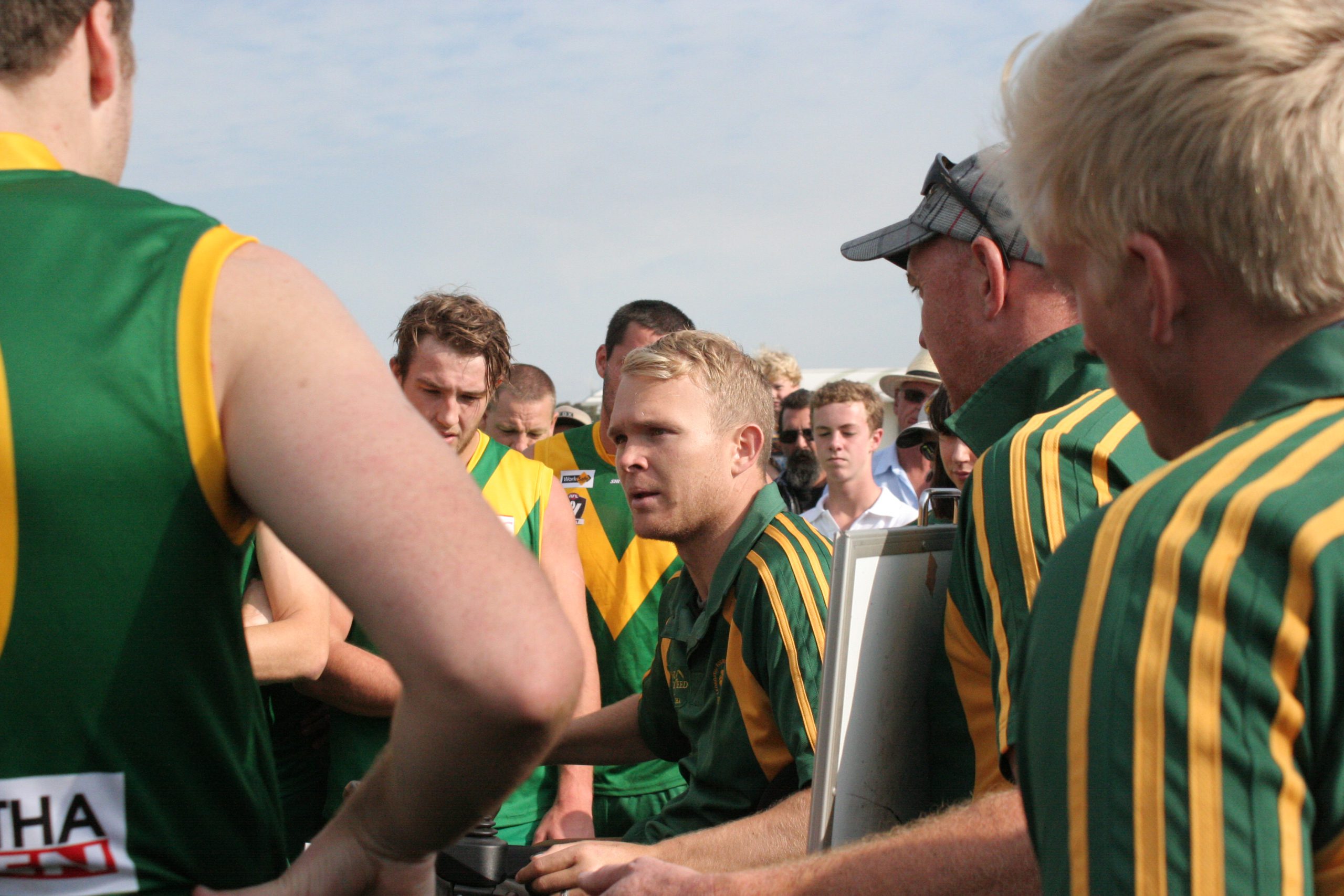 SATURDAY marked a big day in the history of the Morwell Football Netball Club, which unfurled just its second back-to-back premiership flag in its history.

The man who led the charge, two-time premiership coach Harmit Singh, was on hand to do the honours.

“It’s my home, even though I’m not from the town; this club is my home,” Singh said.

Singh’s trend of success continued on Friday night when he led his new side Northcote Park to a 10-goal win in the opening round of the Northern Football League.

“We had nine first gamers; a few from the Gippsland League. Ryan Pendlbury played, Tarkyn Lockyer played, Ash Close played along with myself,” Singh said.

On the field it was a disappointing day for the new-look reigning premier, which struggled from the outset and lost 7.10 (52) to 18.15 (123) to last year’s grand final opponent Wonthaggi.

“It hurts. Obviously it is a special day for the club having the flag unfurled. The boys are up against it a little bit, hopefully they can equip themselves and execute,” Singh said.

Singh’s successor Dean Warren was just as disappointed by his side which went down by 71 points in the grand final re-match.

“For those guys to go out there and put on that performance was pretty woeful,” Warren said.

Early turnovers cost the Tigers who trailed the Power by 32 points at quarter-time.

Unimpressed, Warren gave his side a serve, which could be heard around the ground.

“If you think that’s intent and pressure I’ll go home. You haven’t trained like that all year. Since when do we let the numbers come out; press up don’t be lazy. It’s not good enough,” Warren shouted.

Across in the Wonthaggi camp Rob Railton set his side a challenge.

“It is very difficult to maintain high standards when you are the hunted and it’s a test of your mental strength now; we just play our brand, our trademark; that’s the challenge,” Railton said.

A 50-metre penalty against the home team marred the start of the second term, which too was dominated by the visitor.

Up by 66 points at the half, Railton warned his side of the dangers of dropping its intensity.

“That’s the challenge when you are hunted they will come out and they will keep hunting,” Railton said as his Morwell counterpart addressed his group behind closed doors.

“They gave you a bit of a bath in the first half but you have got a second half to change that,” Warren said, who was pleased with his team’s effort in the final six minutes of the second quarter.

Wonthaggi took its foot off in the third, much to Railton’s disappointment.

The lapse gave Morwell the opportunity to get back into the game, however the Tigers missed some early chances.

“If we started putting this pressure on from the start of the game, the scores would be different,” Warren said during his three-quarter-time address.

The Power booted four goals to three in a more even last term, before running out a 71-point winner.

“We ended up kicking five and five in the last 40 minutes. That was the most pleasing thing about the whole day,” Warren said after the game.

Railton was particularly impressed by Adam Cook who kicked five goals on return to the line up, but was most pleased with the early intensity.

“We were really pleased especially with the first half. Third quarter was disappointing but we will take that,” Railton said.

Warren was far less impressed, warning his group there could be up to eight changes to the side heading into next week.

“That definitely wasn’t the result we were looking for. I thought our intent and hardness at the ball wasn’t there and they soon found out about it… we weren’t first to the footy all day,” Warren said.

LESS than three years after an on-field incident left him a quadriplegic, Beau Vernon made his senior coaching debut for Leongatha.

The 26-year old did so in style with a massive 123-point victory, the Parrots’ biggest ever over Traralgon.

“You never look too much into that sort of thing but I suppose it’s a nice one to have under my belt,” Vernon, who was particularly impressed with his team’s pressure around the ball, said.

“You never expect to go out and win by that much. It was a great four quarter effort,” he said.

The win capped off a big week for the club, which finds itself on top of the table after round one.

“It was excellent. That feeling wasn’t just after yesterday’s game; we had 300 people up at the club Thursday night, served 200 meals. There is just a really good feeling around the club and the win contributed to that,” Vernon said.

Tom Marriott and Jake Best were the standouts for the Parrots; the latter booting nine goals.

DESPITE a third quarter lapse, Moe coach Adrian Burgiel said he was happy with his side’s opening round performance which saw it defeat Warragul by 36 points.

The Lions led by five goals at half-time but allowed the home team to get back within eight points at the last change.

In a positive sign for Moe, the visitor kicked seven goals to three in the last to run out victors.

Burgiel was among the standouts up forward for the Lions, however all eyes were on new recruit Mark Engley (Glengarry/NGFNL) who booted three majors.

“He was brilliant. He is a nice kick at goal, he has good hands and he leads well. He will give us that option up forward we were lacking last year,” Burgiel said.

Tyson Biffin (VFL) was also impressive on debut for the club, while Charlie Rieniets stood out in a new role at full back.

It was not all bad news for Warragul.

IT was tipped to be among the competition’s big improvers and on Saturday Drouin proved just that, posting a 28-point win over last year’s finalists Bairnsdale.

The home team led by 19 at the first change and 21 at half-time, before running out as a convincing opening round winner.

McCallum revealed at last week’s Gippsland League season launch he was among a group of former Hawks who played in the 2010/11 grand finals that agreed to return to the club for season 2015.

MAFFRA has dealt arch rival Sale its first opening round loss since 2002.

Neck and neck early, the Eagles broke away to lead by eight points at the first change.

By half-time that lead was out to 18.

The new look visitor managed to get within nine points of its opponent early in the last, before Maffra kicked away to win by 24 points.

Last year’s leading goal kicker Darren Sheen made his highly anticipated return to the Eagles’ forward line but he was over shadowed by Daniel Bedggood who starred with eight majors.

Kane Martin was best on ground for Sale, despite suffering a hamstring injury late in the match